Delays lead to US$ 5 to 10 billion losses to shippers

Danish maritime data analysis company, Sea-Intelligence has measured schedule reliability from the perspective of the cargo being moved. In the first phase, the analysts calculated what share of global trade was being moved on the deep-sea trades that are covered in its Global Liner Performance report and then calculated the share of cargo that was being shipped late.

"Before the pandemic, the baseline level was roughly 20%, increasing to 70% of the cargo arriving late in the past few months," noted the analysts, who then calculated the number of TEU*Days lost due to late arrivals.

"To place this measure into context, it can be argued that the loss of 31 TEU*days in January is the same as having an “inventory” of 1 TEU of cargo just standing idle for the full month," said Alan Murphy, CEO of Sea-Intelligence, who explained that "Using this definition of 'inventory', the pre-pandemic normal is a permanent inventory of 260,000 TEU globally, due to cargo delays. This spiked, due to the current supply chain delays, to a present level of 1.8 million TEU of inventory." 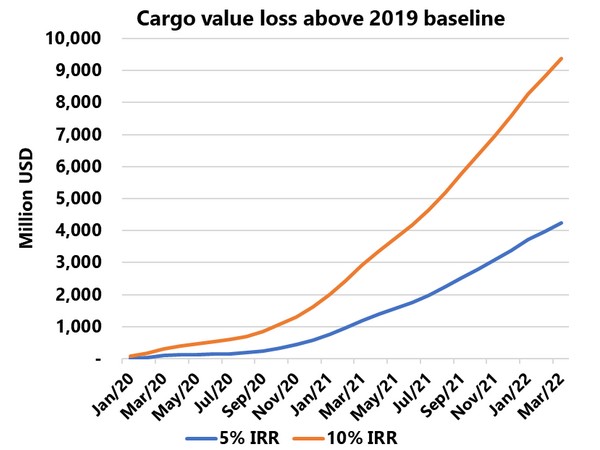 Having an inventory equals additional supply chain costs and the cost of inventory depends on the value of the cargo in the container, as well as the interest rate a company assigns to their inventory value (Internal Rate of Return, IRR), according to the Sea-Intelligence report.

"There is of course a very wide spread in the value of the cargo, but a reasonable global standard benchmark is US$40,000 per TEU," noted the analysts in their study.

Additionally, a reasonable IRR is more difficult to assess, as this is highly dependent on the context a company operates in. "Hence, we have made two calculations, one for an IRR of 5% and one for an IRR of 10%," said Murphy.

In order to assess the total impact over the baseline loss (as some cargo always gets delayed), Sea-Intelligence analysts have calculated the cumulative loss across January 2020 to March 2022, over the 2019 baseline level.

This is shown in the figure above. "What this tells us, is that the severe vessel delays alone have resulted in a financial loss for the shippers globally, of roughly US$5-10 billion thus far," pointed out Murphy, who concluded, "This is only the ocean side and does not include any inland delays or port congestion."