Domestic shipments continued to dominate the asparagus market. According to the BLE, their presence was somewhat limited, but it was generally sufficient to meet demand. On several occasions, however, sales had improved to such an extent that demand could not be completely satisfied after all. In these cases, distributors were able to increase their previous prices, in some cases very significantly. In Frankfurt, a certain degree of customer saturation could not be denied. However, as a result of reduced supply, prices ultimately also trended upwards there. 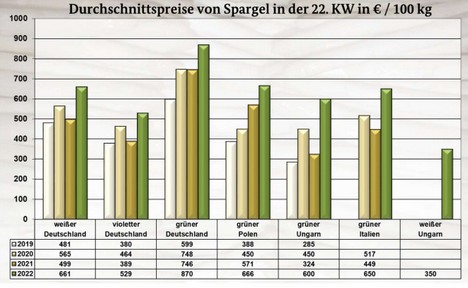 In general, there was an increase in interest before the long Whitsun weekend. Imports from Poland, Hungary and Italy locally only had a supplementary role. Due to the increase in the price of domestic lots, they had a certain marketing opportunity. Class II offers from Germany were also readily accepted by buyers.

Apples
Domestic produce continued to dominate, but lost relevance overall. Here and there, the prices for products from the southern hemisphere dropped a little due to the volumes. Domestic lots, on the other hand, became more expensive in some places as a result of more limited supply.

Table grapes
Italian deliveries grew: Black Magic and Victoria were organoleptically but not always 100% convincing. Thus, a wide price range was established. The increased arrivals from Italy, however, had little impact on the prices of the dominant South African and Chilean batches.

Strawberries
Local fruits dominated the scene. Due to a divergent quality, a wide price range was established in some areas. Moreover, for the same reason, prices tended to go down rather than up. Stocks, however, could not always be avoided.

Apricots
Spanish offers predominated. The presence of French and Italian batches expanded. Few Turkish imports complemented the action in Munich and Frankfurt, where they cost €13.- per 6 kg. Large calibers received more attention and could sometimes be sold quickly.

Cherries
The season slowly picked up speed. Spanish deliveries obviously prevailed and were mostly available in the large calibers preferred by customers. Their quality was mostly convincing, so that customers were happy to take them. Among the Greek products, there sometimes were some problems with the quality, which was inevitably reflected in the prices.

Peaches and nectarines
Spanish batches were more prominent than Italian ones. While French produce was still a long time coming, the first Turkish imports could be accessed in Frankfurt on Friday. In general, a rather uneven quality could be observed. Prices developed accordingly.

Lemons
In the case of Spanish fruit, the switch from cheap Primofiori to more expensive Verna was in full swing, which is why prices shifted upwards overall. Turkish Enterdonato lost relevance, volume-induced the prices climbed upwards from time to time.

Bananas
Supply generally harmonized with sales. Therefore, the prices changed only selectively. In Berlin, the overall supply became slightly cheaper as a result of volume factors. In Munich, on the other hand, second and third brands became more expensive.

Cauliflower
Domestic lots dominated and in some places held a near monopoly position. Belgian offerings followed in terms of importance. Demand had increased and, despite expanded availability, it was not always possible to be met fully.

Lettuce
Lettuce came from Belgium and Germany. Interest was not particularly strong and was easily satisfied. Prices often dropped, partly due to purchases and partly due to an over-abundant assortment. In the case of iceberg lettuce, there were mainly domestic and subsequently Dutch items.

Cucumbers
The product range consisted of domestic, Dutch and Belgian products. Availability had not changed significantly. In this sector, too, supplies were sometimes too abundant, forcing traders to reduce their prices.

Tomatoes
Dutch and Belgian batches obviously dominated the scene. Domestic and Italian items had complementary character. The quality of the fruit was generally convincing. Availability had obviously expanded and sometimes outstripped sales.

Sweet peppers
Marketing was quite inconsistent with Dutch and Belgian lots setting the tone. In most cases, supply outstripped demand, causing prices to fall. From time to time, however, the range was not sufficient to satisfy interest completely. In these cases, rising prices were also recorded.