Australian agricultural exports are set to reach a record $64.9 billion in 2022-23, according to the latest Government figures, but farming groups are concerned it may not be as clear-cut as the figures might first suggest.

This week's ABARES’ latest Agricultural Commodities Report predicts the industry’s gross value will tip past $80 billion for a second consecutive year on the back of favourable weather conditions and high world food prices. But National Farmers’ Federation President Fiona Simson says these 'positive' figures do not paint the full picture and conceal the cost of the farming crunch impacting farmers and consumers, warning that despite the bumper season, many farmers were feeling the pain of eye-watering production costs.

"Prices for fertiliser, fuel and power are on a rocket ride to the moon," Ms Simson said. "As ABARES points out, producers are dealing with the highest fertiliser prices since 2008, as the global energy crisis takes its toll. Of course, all this is compounded by the ongoing worker shortage putting the handbrake on production, an issue that will only worsen later in the year during the crucial harvest period."

Ms Simson acknowledged that despite the challenges, today’s figures showed the farm sector was tracking well towards its target of $100 billion in farm gate output by 2030. She said while not all these issues were within the Government’s control, it was critical the Albanese Government, including the new Minister for Agriculture Murray Watt, worked closely with industry to limit the impact of the cost crunch.

"We raised these issues with Minister Watt and discussed how we can work together on cost of farming issues, as we look to mitigate the flow-on impacts to everyday Australians," she said. "Another $80 billion year means we are well on the way to achieving our goal to be a $100 billion industry by 2030, but now is the time to ensure we’re ready for when seasons and markets inevitably turn." 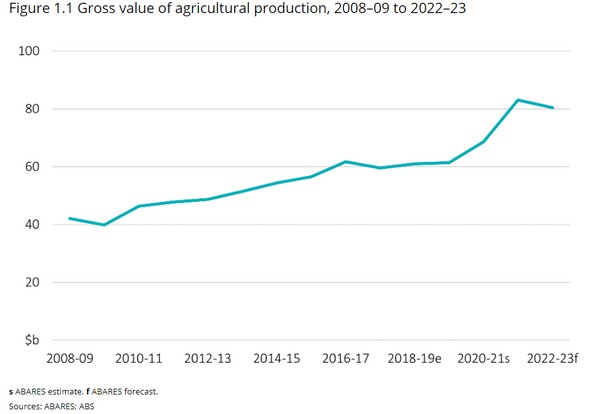 Agricultural Commodities Report acknowledged that Australian producers will continue to face significant challenges over the next two years, and food prices have been rising worldwide and are not expected to begin easing until at least 2023.

World fertiliser prices are at their highest level since 2008 which will lead to reduced use on all farm types, although most Australian growers are expected to have adequate supplies for the upcoming winter crop. Another underlying driver of food inflation is energy prices, which in turn have led to the higher fertiliser prices, and sanctions on Russia are also making an indirect contribution to food prices through higher energy costs.

Another challenge the report found was the well above average rainfall in late summer and autumn which led to localised flooding, weather damage, and harvest delays. It led to the inundation and loss of some summer crops when access to farm labour and imported machinery will also continue to present challenges for many businesses. Ongoing disruptions to global supply chains and shipping are expected to continue to challenge Australia's exporters - but are not expected to meaningfully restrict exports.

A leading Australian stone fruit grower told FreshPlaza last month that there were actually increases in values across all product lines across the summerfruit season, but also noted that it is not quite covering the new costs of production.

"With what we are up against with the shortages of labour, and bringing in fertilisers/chemicals and things like that," he said. "But it is positive that we were able to pass a percentage of those costs onto the consumer and still be able to shift through the amount of volume that was required. It didn't bridge the whole cost of production because we are in a position where if we did pass it on, then the consumer would probably walk away. So, it's about building that happy medium and focusing on producing a good, clean, premium piece of fruit."

(Including some information sourced from NFF Press Release)