Renato Bassanezi, Fundecitrus researcher: "The idea is to gain time until more sustainable and definitive solutions are found"

“While in Florida more than 90% of orange trees are already infected with HLB, in São Paulo it is only 22%”

More than 100 years ago, what is now considered the world's most devastating citrus pest was identified in Asia. Greening or HLB is a disease caused by the bacterium Candidatus liberibacter spp. that is threatening the global citrus industry. After its detection in Asia and Africa, the pest reached the Americas and was detected in the world's largest producer of oranges and orange juice: Brazil. 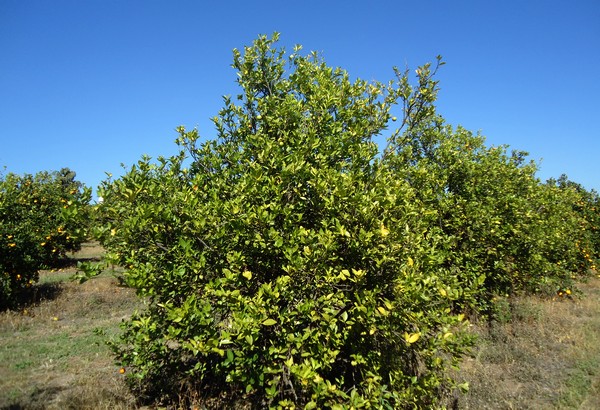 "The vector insect of the huanglongbing bacterium (HLB), the Asian citrus psyllid (Diaphorina citri), had already been present in Brazil since 1942, but the bacterium and the disease were first reported in 2004, in the state of São Paulo, which accounts for about 70% of the country's orange production," says Fundecitrus researcher Renato Bassanezi.

"In 2005, it was detected in the state of Minas Gerais (southwest region); in 2007, in the state of Parana (north and northwest regions) and, in 2019, in the state of Mato Grosso do Sul (east region). It is not known for certain how the disease was introduced into the country, although it probably happened due to the illegal and non-commercial transport of citrus propagation material contaminated with the bacterium." 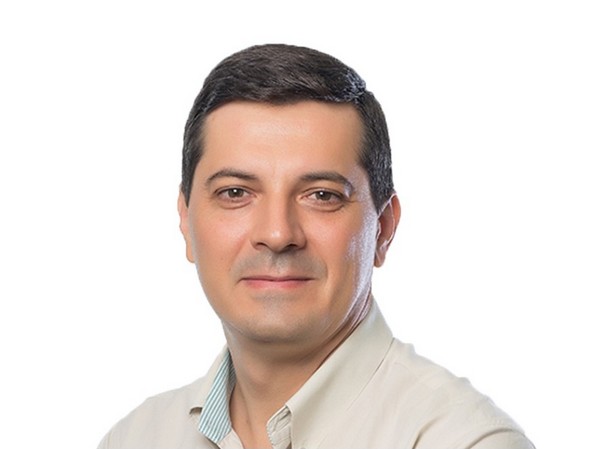 Like Brazil, Florida has also been hit hard by the disease, which has significantly reduced the yields since its appearance in the state's citrus groves. "In São Paulo, the spread of the disease has taken place at a much slower pace than in Florida. While in Florida, where HLB was reported in 2005, more than 90% of orange groves are already infected, in São Paulo, the last survey conducted by Fundecitrus, in 2021, estimated that about 22% of orange groves have the disease. This slower spread in São Paulo is mainly due to the control actions carried out by growers and phytosanitary agencies before and after the discovery of the disease," says Renato.

"Since 2003, all citrus seedlings in the state of São Paulo have been produced in nurseries protected with insect-proof nets and pathogen-free buds and budwood, which has reduced their spread through plant propagation material. In Florida, seedling production in protected nurseries has only been carried out since 2008." 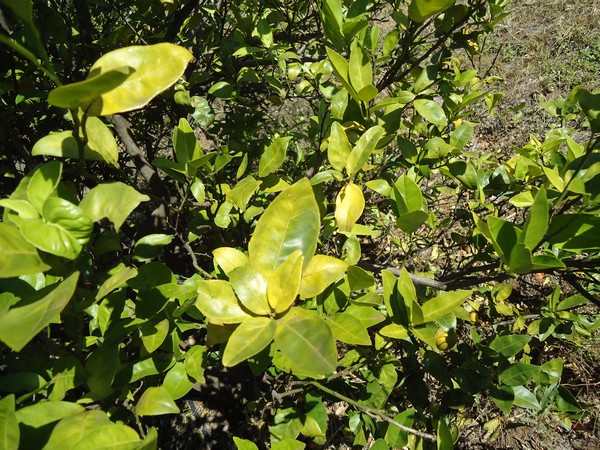 "The elimination of plants affected by citrus canker and CVC, a practice already adopted by citrus growers in São Paulo before the arrival of HLB, facilitated the adoption of this practice also for HLB in the first years of the arrival of the disease. Moreover, in São Paulo, the previous experience in controlling the CVC disease, caused by a systemic bacterium (Xylella fastidiosa) and also transmitted by an insect vector, the cicadellids, greatly helped growers in controlling HLB with preventive control of the psyllid."

"So, the basic difference between São Paulo and Florida was that the latter tried to live with the disease and look for curative methods or resistant plants through research. 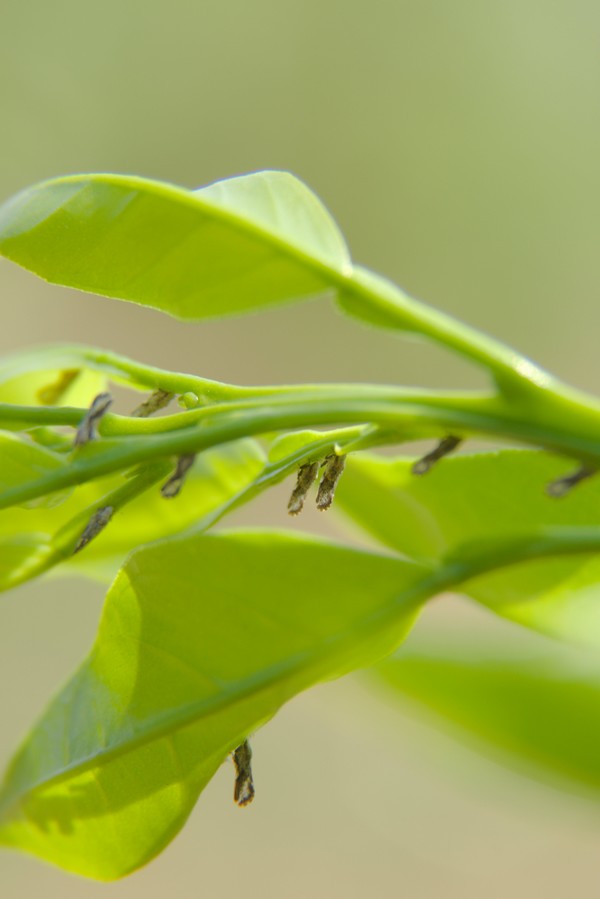 "In São Paulo, what was sought, and continues to be sought, was the preventive control of infections through the planting of healthy seedlings, the elimination of diseased plants, and preventive and regional control of the vector insect. Still, we cannot say that we have already won this war, because, although slowly, the disease continues to spread and, in regions with less adherence to preventive control practices, the disease is already reaching levels similar to those in Florida. The idea is to gain time and ensure the competitiveness of citrus farming until more sustainable and definitive solutions are found." (Photo: citrus psyllids).

Researchers around the world search for HLB resistance genes.
All commercial citrus varieties (oranges, lemons, limes, grapefruit and mandarins) and their rootstocks are susceptible to infection by the bacterium and to show symptoms of the disease, says Renato Bassanezi. "Until a few years ago, there was still no knowledge of citrus and citrus-related species with resistance to the disease. Today, thanks to studies carried out in California and São Paulo, two species of citrus-compatible Rutaceae are already known to be resistant to HLB. The main goal now is to discover which genes in those species confer resistance to the HLB bacterium, so that they can be introduced by breeding into commercial varieties. This is a long-term process involving researchers from all over the world. 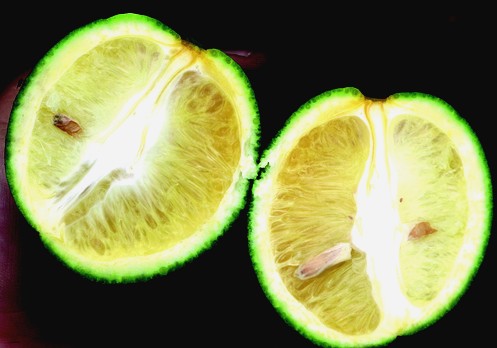 Juice industry also affected by HLB
HLB affects citrus cultivation in several ways. "Initially, it causes an increase in the production costs due to the implementation of control measures (inspection, plant removal, monitoring and preventive vector control). A 15-25% increase in production costs is estimated after the arrival of HLB. The disease also causes the loss of plants in the orchard due to the removal of diseased trees. Since 2005, more than 61 million orange trees have been officially eliminated in the citrus sector in São Paulo," says Renato.

"Lastly, since there is no cure for the diseased plant, the severity of the symptoms causes a gradual loss of production, both due to the lower quantity of fruit and to some of it falling prematurely from symptomatic branches. In 2021, the Crop Estimation Survey, conducted by Fundecitrus, estimated a loss of 9.5 million 40.8 kg orange boxes due to premature fruit drop alone as a result of HLB." 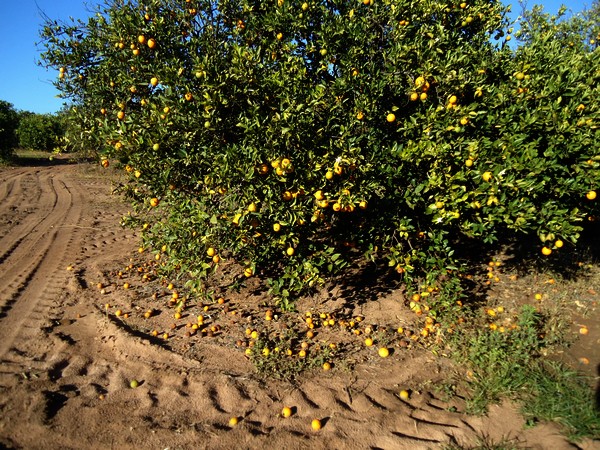 "Given the increased incidence and severity of HLB in orchards, there is also a loss of productive longevity. Orchards that should have a productive life of 30 years now last between 15 and 20 years."

"Fruit quality is also affected, with both lower calibers and a reduction of Brix indices, as well as increased acidity and limonin quantity. A study in the United States showed that when 25% of the fruit used to make juice comes from HLB-affected trees, the flavor is altered and it becomes perceptible to the consumer. Also, in regions where the incidence of the disease is high, orchard renewal and new plantings are extremely difficult, because in a short time there are a large number of contaminated young plants that will not even become productive. Thus, many growers end up abandoning citriculture (switching to other crops)," said the researcher.