The problem of drought is, next to the war in Ukraine, a serious threat to the global food and agricultural market. There is probably no place on earth that has not been hit by drought. Nevertheless, it is also a problem to reach the general public awareness, especially in Poland, which has been in a state of permanent drought crisis for several years. 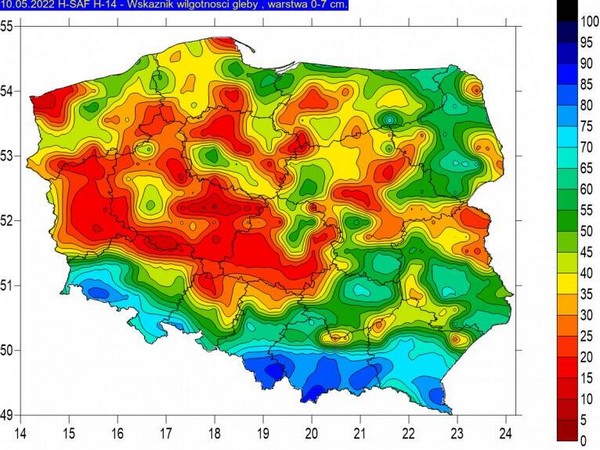 Unfortunately, such severe water shortages reduce the yield potential in almost all EU countries. As a result, wheat futures contracts in world markets are rising. The new harvest is already valued at 400 EUR per ton.

A dry and warm summer is expected in Poland and the entire Central and Eastern Europe, which will favor the development of the hydrological low flow, especially in the west of the country, and storms will not allow for the reconstruction of water resources.

Due to the lack of water, some of the yields have already been reduced. Moreover, in Poland, large areas were dried up for many years due to incorrect melioration. Over the years there has been high evaporation, high temperature, no rainfall, low soil moisture. Farmers have a problem.

"We have a drought and even though it rained a little, it is not enough for good plant vegetation. This can be seen in the fields where the soil is worse and does not hold water. It can be assumed that the yields will be lower this year" - emphasizes Agnieszka Sołtysiak from the Warmia and Mazury (North Poland) Agricultural Advisory Center.

Food prices are increasing
Food production costs are rising. This is influenced, among others, by more expensive fuels, increase in energy, gas and fertilizer prices. Now food producers have another cause for concern. If the current weather trend continues, this year's yields will be much weaker due to persistent drought. The drought is observed in Poland and among some of the world's major food producers and exporters (including Europe, the USA and Brazil). It will additionally increase the prices of grains and oilseeds, and, consequently, the prices of feed and meat. In turn, locally it will support the increase in the prices of fruit and vegetables.

"Lower production in Poland, due to the drought, will result in price increases, especially in the area of fruit and vegetables" - predicts Mariusz Dziwulski, expert of the PKO BP bank. Rising food prices are a fact, and consumers will feel them most strongly this fall.