After two and a half months of persistent rainfall, low temperatures, and lack of sunshine, the farmers of the Valencian Community are starting to see the real damage these weather events have had or will have on most of their crops. A study by the technical services of the Valencian Association of Farmers (AVA-ASAJA) estimates the expected losses due to the climatic anomaly in the Valencian agricultural sector at more than 150 million euro. The affected area amounts to 120,000 hectares and affected citrus fruits, almonds, stone fruits, kaki, and vegetables the most. They also damaged agricultural infrastructures.

The biggest losses are expected to happen in citrus fruits, especially oranges and mandarins: around 80 million on an area of 50,000 hectares. On the one hand, in the current campaign hundreds of tons of fruits that were pending harvest ended up falling to the ground or staying in the tree due to the loss of commercial value; on the other hand, in view of the next season, the excess of humidity has also caused problems of rottenness in the flowering that will reduce the future harvest in many farms. 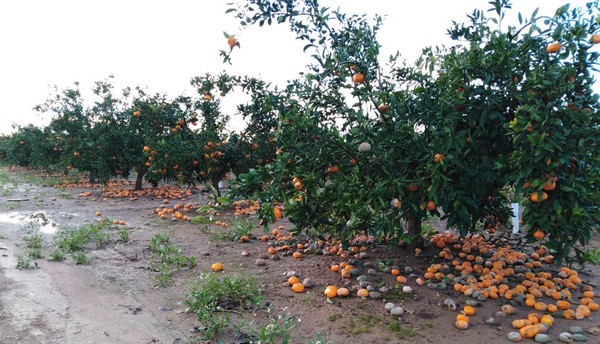 The Valencian almond is facing a historically difficult campaign with losses estimated at 18 million. The Arctic cold wave at the beginning of April caused severe frost in some 30,000 hectares of the interior regions, to the point of spoiling the entire harvest in hundreds of fields and causing a 70% collapse in regional production.

Stone fruit production (peaches, nectarines, apricots, plums, and cherries) was also decimated because of the devastating effects of the rains that coincided with the phases of flowering and budding. An area of 10,000 hectares has suffered losses due to climate issues, with an average fall of more than 60% in the production potential and losses of 16.5 million.

5,000 hectares of kaki were seriously damaged and losses could reach 12 million.

The spring rainfall, especially the torrential rain of May 3 in L’Horta, destroyed entire fields of vegetables, especially onion and potato crops. The direct losses, estimated at 11 million, combined with the low prices of previous years, jeopardize the continuity of the two main crops that horticulturists rotate with tiger nuts. The rains have delayed the sowing of the tiger nuts and could make this a black year for the Valencian orchard.