Bravo® apple volumes up 30% this season

Bravo® apples, bred in Western Australia as variety ANABP01, are available in independent and major retail stores across Australia now, with 30% more fruit available throughout this season.

WA Farm Direct are the licenced marketer of Bravo apples and Sean Engelbrecht, National Development Manager of Bravo Apples says the variety is much sought after for its distinct appearance, outstanding flavour and crisp texture.

“Bravo® apples have a beautifully balanced natural sweetness, with testing ensuring the quality is always consistent for the discerning apple buyer in the family,” Sean says. “The apples are quickly gaining a strong following from Australian families and foodies alike.”

“Recent nationwide research of apple consumers showed that Bravo apples have the highest preference rate of any consumer that has purchased them, beating traditional favourite Pink Lady into second place. Consumers credit the juicy sweet taste and crisp firm flesh for this preference,” said Sean.

"The growing season has been good, however we had significant rain events across Australia which have impacted production. Five days over 40 degrees in Western Australian regions and then storms and pro-longed rain events throughout Australia with flooding on the East Coast of Australia."

Volumes of the Bravo apple will continue to increase as new plantings come into commercial volumes.

"We have a number of new orchards which aren’t yet in commercial production so we are expecting the volumes to grow significantly over the next three to five years, in addition to this we also have new plantings each year which are coming online." 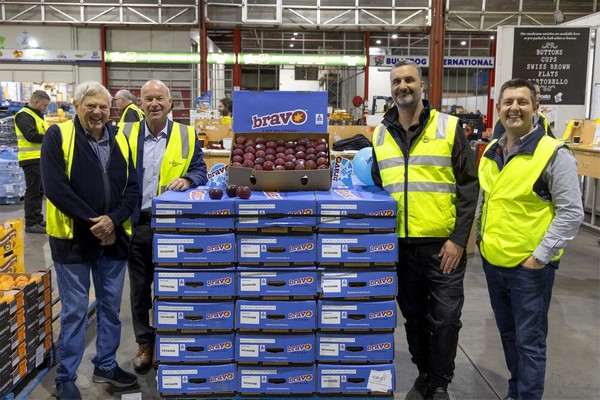 Department of Primary Industries and Regional Development Director General Terry Hill says the harvest celebration provided an opportunity to reflect on the amazing work of the State’s apple breeding team and the recent passing of John Cripps, the man who bred its parent variety.

“Western Australia is impacting the global market for apples when it comes to apple breeding and the release of premium new varieties,” Terry says.

“Bravo is another one of the outstanding achievements after years of patience, perseverance and innovation by the department and its officers, particularly John Cripps – whose passion and tenacity led the development of Bravo’s® parent, the Cripps Red, as well as Cripps Pink, which as Pink Lady® is one of Australia and the worlds’ leading premium apples.

“Manjimup is now home to the National Apple Breeding Program, where our officers are working on new varieties for our farmers to grow and prosper and so future generations can enjoy unique and tasty WA bred apples.”