Fruiterers and wholesalers back up and running quickly post floods

Many fruit and vegetable businesses have resumed at least near-normal trading, following the wild storms and flooding that impacted South East Queensland and Northern New South Wales earlier this month.

The widespread flooding even forced the closure of the Brisbane Produce Markets for four days, with many traders struggling to make alternate arrangements to sell, or even store, their fruit and vegetable produce. Almost all of the businesses at the market lost produce that was stored on-site at the time, as water inundated the premises - while other supplies were affected and had to be sent to other states to be sold, which had an impact on their markets too. Most are back up and running, but supplies from the growing regions may be reduced or quality affected for some time.

Much of the Moreton Bay Region in Brisbane was affected in some way by the weather event which caused havoc. For Independent fruiterer retailer George Macaron of Lawnton Country Markets, it was a tough week, with localised flooding restricting customers from accessing his store and the fruit and vegetable supply chain being impacted by the flooding of the Brisbane Markets at Rocklea. 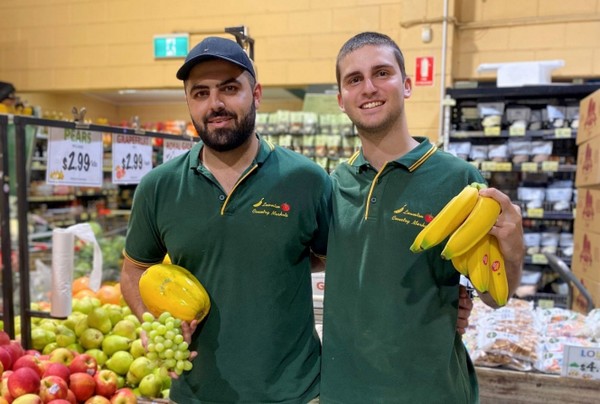 He says the swift efforts and dedication of those working through the supply chain, including independent fruit and veg shops, has ensured fresh fruit and vegetables were soon back on the shelves throughout Queensland.

“We lost sales due to customers not being able to get to the store. We also had to close the shop early over the weekend so our staff could get home safely,” Mr Macaron said. “Unable to get produce for a couple of days from the Brisbane Markets meant that we had to source some of our supplies directly from local farms. We are fully stocked, and customers are able to get to our store now.”

Mr Macaron agreed that the swift actions of the Brisbane Markets and the wholesalers who operate at the Markets meant that the distribution chain was able to get up and running again quicker than expected.

“We went to the Markets on Wednesday and again on Thursday and were able to purchase most of our requirements,” he said.

The Brisbane Markets is home to Queensland's only central fruit and vegetable market and is the state's most important centre for the marketing and distribution of fresh fruit and vegetables. It records annual trade in excess of 700 million kilograms of produce including a wide variety of fresh fruit and vegetables. Businesses right through the fresh produce supply chain that have been affected by this wild weather need the support of the Queensland community. By shopping at your local, independent fruit and veg shop, you are not only supporting them but are supporting the businesses who operate from the Brisbane Markets, most of which have suffered significant losses from the floods.

Despite the great work done to get trade back up and running, he says there is still much to do, and consumers can help by buying local, as independent fruit and veg shops provide customers with a better choice of quality, freshness, and service. They give customers the opportunity to shop as close to home as possible while supporting their local community.