The Food Research and Technology Institute's (IRTA) in vitro plant cultivation laboratory, part of its Fruit Growing program, has developed a bioreactor designed for the in vitro propagation of plants or for the production of cuttings, which it has baptized with the name of GreenTray® (patent ES2763637B2 granted to Spain and requested to the United States and Mexico). This bioreactor reduces the number of operations required, which makes it possible to reduce plant material handling time by 80%, decreasing costs and the risk of material contamination. 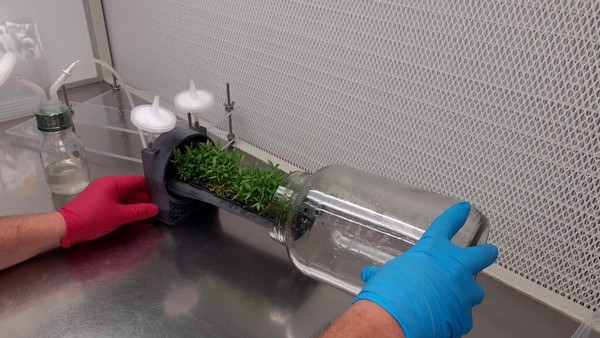 GreenTray® has a simple design. It is made up of a glass or plastic flask and a plastic tray that is attached to the flask; an inlet and outlet tube supplies the liquid nutrient. This design perfectly anchors the plant material to the tray making it safe to handle the material without the need to touch it. The plastic tray with the plant material is inside the flask at all times and it's not removed from it until the flask is handled. The entire tray is removed when you have to operate, without using a scalpel or tweezers, and producers can work with the entire tray at the same time. Thus, the sprouts are handled jointly and not one by one as in the other systems, which represents an enormous saving in time and production economy.

"Manpower accounts for 80% of the cost of propagation, and GreenTray® allows carrying out a 30-minute task in 5 minutes," stated Ramon Dolcet, IRTA researcher in the Fruit Growing program. "The main advantages of the system are that it allows removing the seedlings all at once, turning them without them falling over, and working with all of them at once," he said.

Mobile modules can be made with 21 GreenTray® per unit, which can be placed in climate-controlled rooms, and only removed when handling is necessary. Altogether, such a mobile module can hold about 4,000 shoots of peach rootstock. A modular assembly of several GreenTray® units will reduce the size of the growth chambers required and facilitate the movement of flasks from the culture chambers to the sterile flow hood chambers. GreenTray® is a mechanically movable design that allows adjusting the plant material to be cut with a blade or laser beam.