Pandemic does not benefit discounters

How are Dutch supermarkets faring?

Albert Heijn (AH) and Jumbo are two of the Netherlands' full-service supermarkets. These gained market share in the second COVID-19 year. That was at the expense of Superunie. Discounters did not benefit from the pandemic. Lidl's share remained the same; Aldi's decreased slightly. This is what market researchers NielsenIQ and IRi's figures show. They noted that fewer fruit and vegetables were sold last year compared to 2021.

NielsenIQ and IRi's market breakdown figures differ slightly. But, the big picture remains the same. AH remains the largest supermarket, expanding its market share. According to this chain, part of the growth (0.2%) is due to its acquisition of 38 DEEN supermarkets. Jumbo is in second place, growing more slowly. Superunie affiliated supermarkets' share fell by almost one percent. 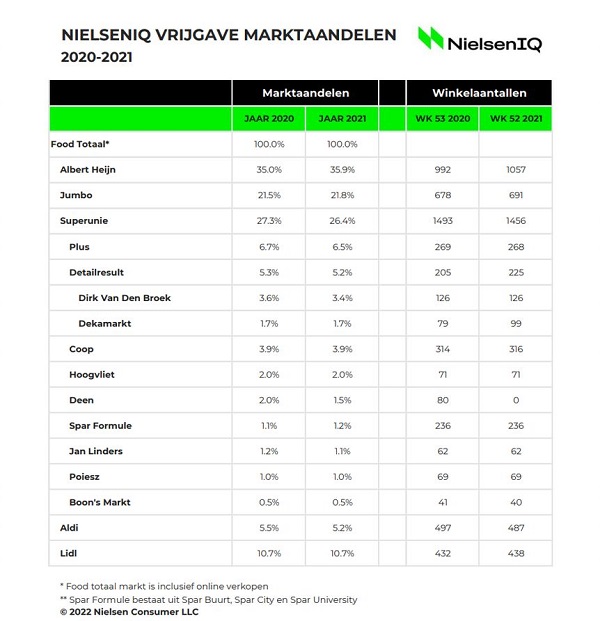 There was record growth in 2020. Sales stayed at a high level in 2021, too. That was partly due to various pandemic-related restrictive measures. Market analysts say there were nearly two percent more sales than in the record 2020 year. According to NielsenIQ, this growth is mainly in the beer, tobacco, batteries, magazines, and candles categories. General fruit and vegetables sales were lower.

The rise in home consumption started in 2020 and continued in 2021, say IRi analysts. "Online sales were a key driver behind the growth. Almost 60% of the total increase came from regular supermarkets' online sales channels." According to NielsenIQ, online shares totaled €2,4 billion in 2021. That is 30% up on 2020. Albert Heijn's home deliveries made up about ten percent of its total sales.

NielsenIQ thinks 2022 will be a 'challenging year'. The supermarket landscape will change with, for example, the Plus/Coop merger. Rising inflation means price increases are inevitable, says the market researcher. "These price increases will benefit sales. However, the question is whether consumers will continue to buy as much." For 2022, IRi expects sales to remain roughly stable, with volumes declining. That is due to inflation and the related price increases in supermarkets. 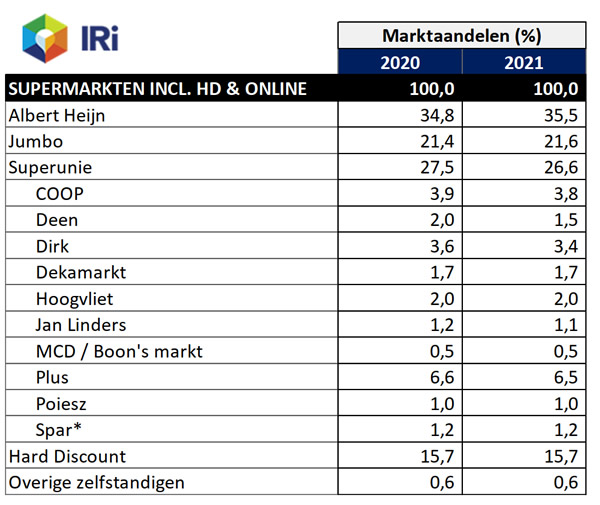 "All Superunie members' market shares fell last year. That was partly because the DEEN stores were sold. But neither Jan Linders nor Dirk have online sales channels. So, those lost market share. Hard Discount was the biggest loser in 2020. That was due to increased one-stop shopping during the pandemic. Their market shares recovered slightly last year and remained stable," the market researchers conclude.