Fresh fruit exports from South Africa have again grown by double digits. In 2021, that country exported more than four million tons of fresh fruit. That is 11% more than in 2020, when exports grew by ten percent. In two years, South African fruit exports have grown from 3.3 to 4 million tons. This record was reached despite several alarming reports in 2021. These were about container issues and problems at the ports. That is according to Jan Kees Boon of Fruit & Vegetable Facts.

This estimate is based on the South African Revenue Service's (SARS) figures. SARS is an autonomous agency that manages South Africa's tax and customs system. These estimates are based on January through October 2021. In previous years, that country realized 95% of its annual total in each year's first ten months. 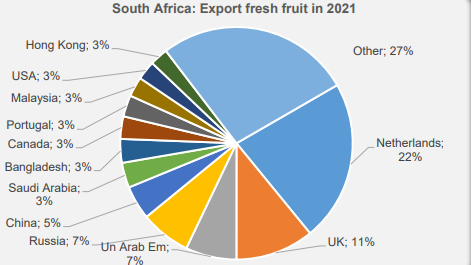 Almost all regions took more
Growth to both the EU27 and the Netherlands was in line with the total growth of South African exports, i.e., 11%. By region, Southeast Asia is the second-largest buyer after the EU. Exports to that region grew by 18% in 2021. The Gulf States are the third-largest buyer. Exports to that area also grew above average in 2021.

Exports to the rest of Europe, particularly the UK, grew at a somewhat slower pace of five percent. Among individual countries, the four percent fewer exports to China and two percent fewer to Bangladesh stand out. However, other Southeast Asian countries did much better, such as Malaysia +27% and India +93%. Within the EU, there was a noticeable shift in exports from Portugal (-14%) to Spain (+170%).

Peak exports from May to September
South Africa exports most of its fruit from May to September. The export of oranges starts a month later. Lemons are available earlier, from late March. South African apples and grapes leave the country from December through April. Slightly fewer oranges to The Netherlands took slightly fewer oranges; the Gulf States more.

With over 30% of the total, oranges are, by far, South Africa's most important export product. The Netherlands' share of South African orange exports is in line with the total. However, exports to the Netherlands in 2021 declined slightly compared to the previous year. What is striking is that far more oranges were exported to the Gulf States in 2021. 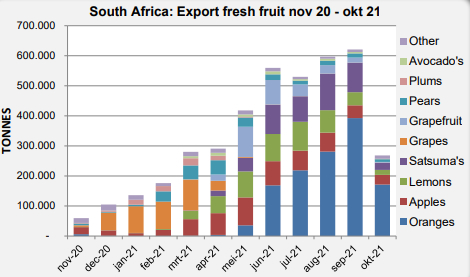 Lots more (30%) mandarins
South African mandarin exports grew tremendously in 2021. They increased by a third to more than 500,000 tons. In previous years, these exports had also grown considerably. The Netherlands buys the most mandarins from South Africa. In 2021, that country exported 110,000 tons of these citrus fruits to the Netherlands. In 2020, that was still only more than 80,000 tons.

There was, unusually, a slight decline in South African mandarin exports to the UK. Very substantial growth rates in exports to the United States (+34%) offset that. As did more to the UAE (+65%), Russia (+23%), and Bangladesh (+38%).

Also, more grapes and grapefruit again
South Africa also exports lots of lemons and limes. But these do not count for much. Again, the Netherlands is the main buyer. Nonetheless, its share of the total remains below 20%. Total South African lemon exports grew by eight percent. Those to the Netherlands, however, declined slightly. Exports of other major export products such as grapes (390,000 tons) and grapefruit (290,000 tons) also increased substantially (20%) in 2021. More grapefruit, in particular (+60%), went to China. And the Netherlands took far more grapes (+35%). 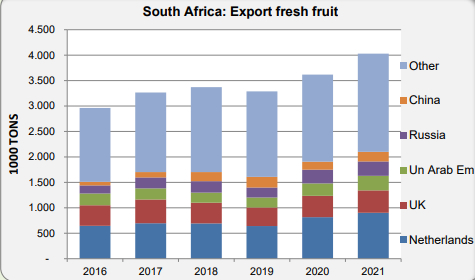 South African pear exports grew by a 'paltry' six percent to 240,000 tons. That was more in 2017. Compared to 2020, plum exports grew very substantially (+75%). But these were much lower in 2019 and 2020. Peach/nectarine exports were also up significantly. After rapid growth, blueberry exports remained at the same level as in 2020.

Click here to see the fact sheet (in Dutch).