On October 1, 2021, the Sanllo company from Spain started its business in Germany. Like many others, their citrus range came under pressure from competition from South Africa and overseas, while persimmons were affected by the storms in Spain. Sales Manager Martin Bach told us how Sanllo dealt with this and what makes the company's range so special. 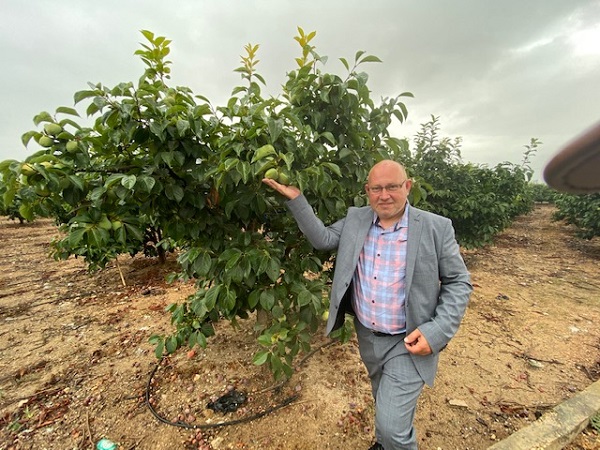 "We are offering the complete range of citrus fruits and persimmons, from our own production sites. Oranges, clementines, grapefruits and persimmons are grown in Valencia. Our lemons are grown in Murcia, with our sales headquarters in Germany," Bach says. "Our fruits are not artificially ripened; they are harvested when ripened naturally. As a result, they have a good flavor. Visually, the fruit still carries its full luster, which also allows us to offer it as a premium fruit. Our goal is to import premium fruit to Germany that is second to none."

Pressure from South Africa and overseas
At the beginning of the citrus season, Sanllo was still struggling as supply from South Africa and overseas was late to market due to container freight delays. "Due to this, the season was still running until the beginning of November, which also caused problems with demand. But we are now well into the season again." The goods can be offered throughout Germany directly from Spain, Bach says. "In Venlo, we deliver the goods via a freight forwarder. In Germany we have three platforms, through which the goods can also be picked."

Persimmons affected by hail
What was more

difficult this year, again, was the persimmon situation, he says. "There have been huge quality differences in persimmons because many persimmons were hit by the hailstorm over Valencia in October. That storm destroyed about 50% of the crop, though we were only partially affected by it." Bach also told us that Sanllo has developed a special cooling technique, which allows the persimmons to be offered from October into April. The fruit is sold to wholesalers, wholesale markets, food retailers and suppliers to food retailers.

International sales
"We can offer the persimmons by the truckload, and so far they've been very well received. The selling price is 7 euros per package, which means for a 4.5 kilo box of 12s, 14s,16s and 18s calibers. We can also adjust these individually, which is very successful in Asia, Canada and the United Arab Emirates. To the Emirates we can deliver several containers per week. In the meantime, we have created a plastic- and glue-free packaging with which we can market them. By also being producers ourselves, we are also very flexible in the tonnages we can offer." 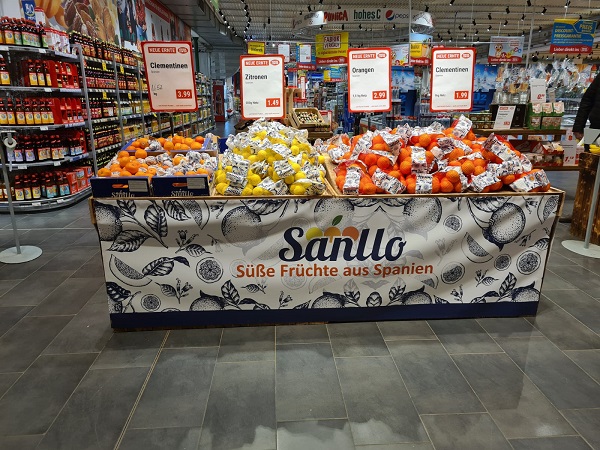 "Currently, we offer standing boxes that can contain five oranges, or five persimmons. In a scaled-down form, again, you could use these for clementines or for paraguayos and stone fruits." Bach has also noticed that retail and discount stores have primarily offered loose produce at the smallest prices this year, while packaged produce has tended to be in smaller trays or rarely seen. "We sell only 1A fruit under the Sanllo name, which is transported neatly in boxes."

The Sanllo company is now run by Roberto Sancristobal Llobell. Sanllo offers various fruits from the Mediterranean region and distributes them in Asia, Canada, the U.S., the UAE, Germany and other countries.