''Together we decided to enter a new chicory processing era''

The Dutch company, Reijnpack, has been using a revolutionary new chicory packaging line for almost a year now. The commissioned MDE Automation to develop a completely new line for optimizing chicory processing.

Reijnpack has kept everyone in the dark for a while. But it has now thrown its doors open for a first look at its innovative, robotic packaging line. ''The first line was for flowpack packaging. A month ago, we began using a second line for trays,'' says Reijnpack's Martine Lisseveld-Reijngoudt. 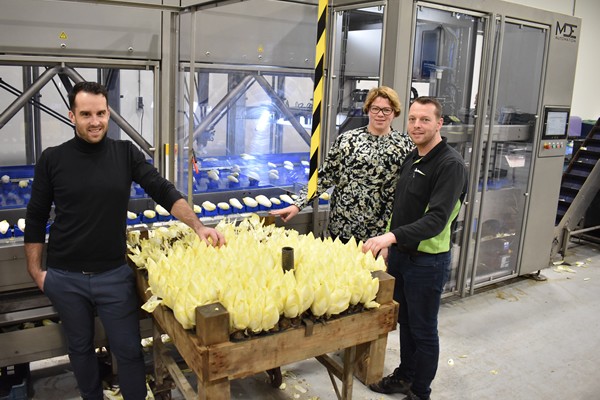 This partnership is paying off. A third line will be put into operation from January 2022. Reijnpack wants to overcome the skilled labor shortage. And minimize the cost price while maintaining the product's well-respected quality.

''We usually have around 60 people busy in the warehouse. Manually processing and weighing chicory is labor-intensive and, above all, careful work. Finding good staff for this isn't getting any easier.'' This is where the company sought a solution.

''We tried out several cutting machines. But, we soon realized that human hands are essential for retaining our chicory's quality. We won't deviate from that," says Martine. That is why Reijnpack began looking for ways to automate the post-cutting process. They then came across Edwin Denissen from MDE Automation. 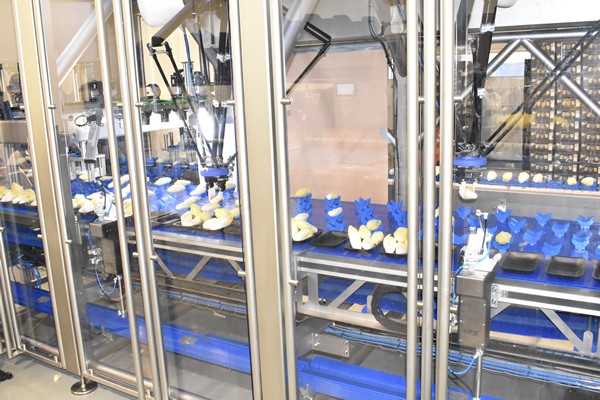 ''Edwin spoke at a local entrepreneurs' evening. He has previously been awarded 'Best new business'. He was a bit too quick for my father. So, I suggested we invite this 'chatterbox' for a talk. We'd already approached several parties. But they didn't add word to deed. Edwin, however, turned out to be a partner who lived up to his word."

"And that's how this great partnership began. Martine knew, from the start, what she wanted. And, more importantly, what she definitely did not want. We like working with companies that want to invest in the future. Together, we decided to enter a new chicory processing era. They know chicory; we know robotics," says Edwin Denissen, MDE Automation's co-owner.

This company was not originally active in the fruit and vegetable sector. This collaboration with Reijnpack and, especially, the good joint consultation led to them developing an entirely new packaging line. Nine months later, the engineering firm delivered a one-of-a-kind, revolutionary line to Reijnpack.

Unusually fast machine
''The main challenge was integrating the combination of orienting, weighing, and sorting in the machine line's software. The hand-cut heads are placed on the belt. The machine then immediately weighs them. Next, four smart cameras record their diameter and orientation in the system. After this, the spring-loaded grippers pick them up gently. And they're sorted, three to four per Reijnpack's 500g packaging."

''Other chicory packaging lines only work with flowpacks. This machine's speed is distinctive. It can also automatically put chicory on trays. It has a 100 to 115 heads of chicory/minute capacity for flow packs. And can do about 80 heads per minute for the trays. So, the processing is optimized,'' continues Edwin.

The machine also gathers lots of data. ''For example, it stores the number of heads and calculates the average head weight. We can use this information to look back at the cultivation. We can then know, say, on which fields pens were harvested that ultimately resulted in nice head weights. Also, if there's a problem, we can see exactly what's going wrong. And how we can solve it.'' 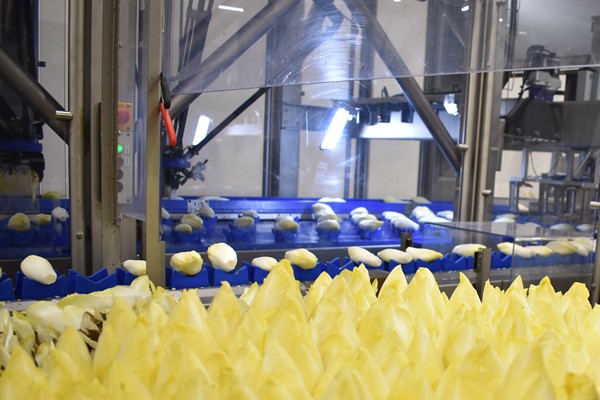 This chicory line was designed exclusively for Reijnpack, who co-invested in it. "You can, however, use this line to process all kinds of fruit and vegetable products in which number and weight are important for packaging. We're keen to still grow in the sector with this,'' admits Edwin.

Reijnpack is optimistic about the future. ''We expect to have recovered the line's cost within a few years. Thanks to this new robot line, we save half on staff. Also, this automation helps us meet all the demands we receive," concludes Martine.