It seems 2021 is set to, once again, become an absolute top year for Onion exports, reports Holland Onions. This Dutch export umbrella's export stock expectations look to be heading towards 1.3 million tons. That is based on harvest forecasts. In the previous season, the epic export mark of 1.2 million tons was eventually easily surpassed. This export season also got going early, albeit with less broad demand.

This season's export figures were already well past the half-a-million-ton mark. That was after just the first 18 weeks. The Netherlands sold 531,000 tons to 129 countries abroad in the previous season. That was in the same period. In the first 18 weeks of the previous season, that had reached 486,000 tons. There is a trend of sustained export growth averaging four percent per year. It, thus, remains fully in line with global production growth.

It must, however, be noted that onion harvests were substantial elsewhere too. That makes this season all the more exciting. For example, within Europe, 7.4 million tons of onions have been harvested - 700,000 tons more than the previous season. With 6.7 million tons, that season's yields were rather inadequate. 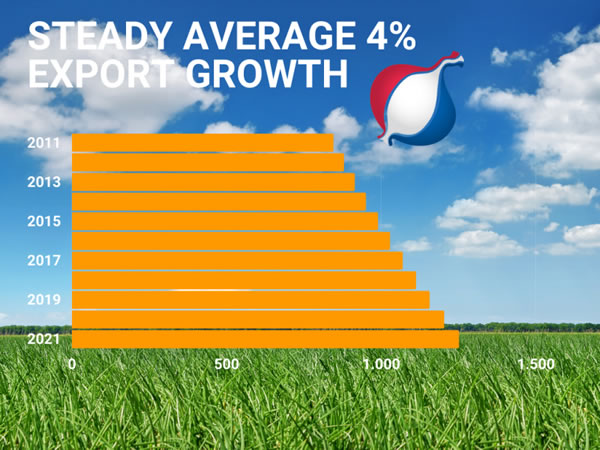 Local consumption is increasing
The first half of 2021 also saw a considerable increase in domestic fresh onion consumption. That grew by no less than 16%. So, the onion is by far the fastest-growing vegetable in the Netherlands. Part of this increase can be attributed to eating more at home as restaurants were less accessible. But apart from that, it offers an opportunity for onions to become even more beloved in the kitchen. Sales of both tomatoes and cucumbers lag far behind. They show meager growth figures of 'only' two and three percent. 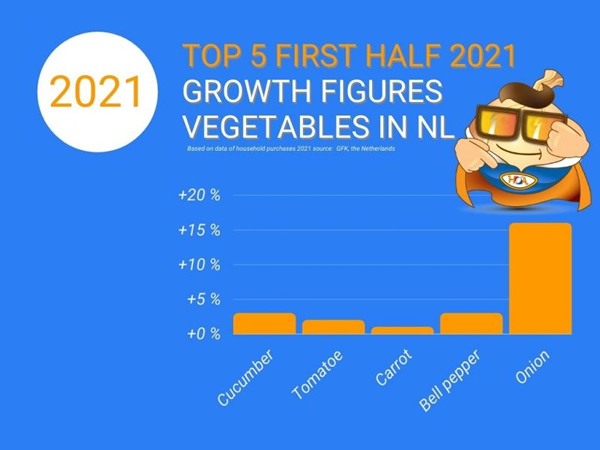 Big volume gainers
Ivory Coast remains a large sales volume gainer. But, Senegal seems to be gradually catching up. Another big volume riser is Nicaragua. This season, Dutch onion exports to that country have more than doubled to over 16,000 tons. But neighboring Central American countries, El Salvador and Honduras, too, are well there. On the Asian continent, substantial growth is taking place in Taiwan. And there is continuing growth in Hong Kong. Taiwan currently takes more than 6,000 tons, putting it in 18th place in the top 20. That is up from 100th place.

Worldwide, 92% of onions are cultivated and consumed locally. Nonetheless, the remaining eight percent appears to be indispensable in supplementing local shortages throughout the world. With a 20% market share, the Holland Onion umbrella has a 20% global market share. It has functioned as an extremely reliable 'gap filler' for decades. It serves customers all over the world at very reasonable prices. That also makes Holland Onion very socially aware. People in the countries it exports to often have little money. And they spend most of that on food. 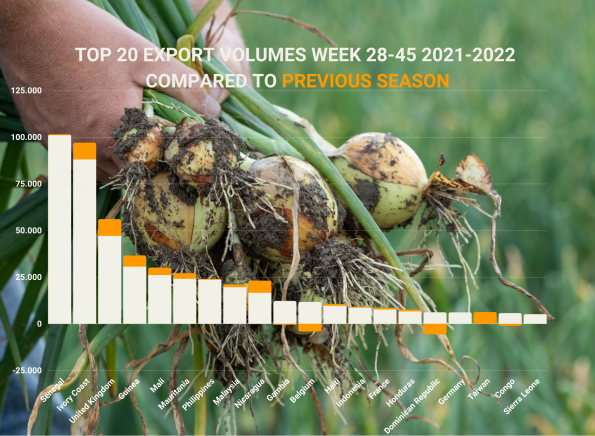 Substantial local growth too
Despite Brexit, Great Britain is again showing strong growth. It has already taken more than 46 million kg of Dutch onions. The same goes for Italy and Finland. And the former republic of Yugoslavia countries: Croatia, Montenegro, Bosnia Herzegovina, and Kosovo. Onion exports to Cyprus, Hungary, and Romania are also worth mentioning. Cyprus moved up a whopping 46 places. And Turkey made its first appearance, though somewhat hesitantly with 50 tons.