VdK, vzbv and Greenpeace all demand:

Social association VdK, the Federation of German Consumer Organizations (vzbv) and Greenpeace are calling on the coalition partners in the upcoming German government to reduce the VAT as much as possible on fresh fruit and vegetables, pulses and plant-based milk substitutes. This would provide incentives to consume more plant-based rather than animal-based foods.

"It is up to the federal government to meet the emissions targets set by the Climate Protection Act. It must therefore ensure that a healthy, environmentally and climate-friendly diet is possible and affordable for all consumers, for example by reducing VAT on fruit and vegetables," says Klaus Müller, head of the Federation of German Consumer Organizations. 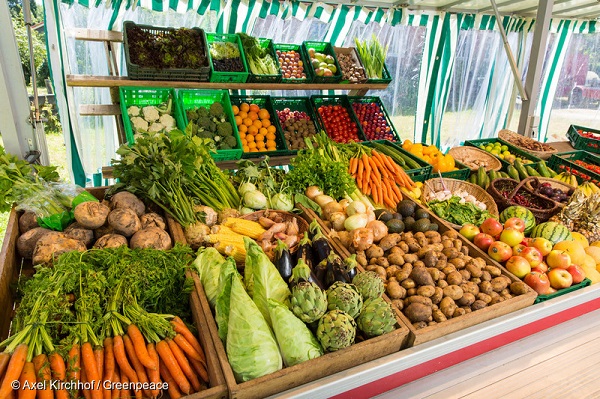 Market stall with fruit and vegetables: healthy and climate-friendly

Majority favors tax incentives
There is broad support for a tax reform that encourages sustainable and healthy food consumption: 71 percent of German citizens are in favor of food prices reflecting the true costs - i.e. including the costs of the environmental and climate damage caused during production. This is the result of a representative survey conducted by Kantar on behalf of the Federation of German Consumer Organizations. Also, 81 percent of respondents are in favor of tax incentives to promote environmentally and climate-friendly consumption.

The three associations see this as a clear mandate to the German government to reduce the VAT on plant-based foods as much as possible and to lobby in Brussels for an EU-wide tax exemption. This would help to offset the current rise in food prices. It would also reduce the burden on consumers caused by an animal welfare levy on meat and dairy products.

Climate-friendly nutrition must be on the traffic light agenda
VdK, vzbv and Greenpeace advocate the immediate implementation of the measures proposed by the Competence Network for Farm Animal Husbandry (Borchert Commission) for more animal welfare in stables. Farmers should be specifically supported with the revenue from an earmarked levy if they create better housing conditions and keep fewer animals. "Agriculture can only make its contribution to climate neutrality if half as many animals are kept and incentives are put out in such a way that the demand for animal products drops accordingly," says Martin Kaiser, executive director of Greenpeace. "To do this, fruits and vegetables should be cheaper as climate-friendly foods, and climate-damaging foods such as meat and milk should no longer be made cheaper through subsidies."

People who change their diet to include more fruits and vegetables eat healthier, help the climate and can even save money. But many people cannot afford a healthy, balanced diet. VdK President Verena Bentele is therefore calling for recalculated standard rates for Hartz IV and basic benefits in old age. This must apply in particular if inflation or further levies make food more expensive: "Children and the elderly in particular are dependent on healthy, fresh food. Chronic illnesses and medications require a special diet. Healthy food contributes substantially to a higher life expectancy."