From Italy came primarily Abate Fetel and Santa Maria; Williams Christ, Boscs Flaschenbirne and Kaiser Alexander rounded out the ranges. The high prices of the Italian fruit generally continued, which did not exactly stimulate customers' desire to buy. Local lots, mainly Conference and Alexander Lucas were on hand, generally generated a friendly interest and could be sold quickly.

Turkish Santa Maria and Devici, on the other hand, sold rather slowly. The Netherlands provided mainly Gute Luise and Conference. Spain sent Abate Fetel and Santa Maria as well as QTee, which arrived at various markets: In Frankfurt, people were expected to pay €16 per 6.5 kg carton for the fruit in size 65/70. Overall, prices remained stable. Here and there, the previously very high-priced Italian Abate Fetel became cheaper. In Berlin, Turkish Santa Maria became a little more expensive due to a higher demand. 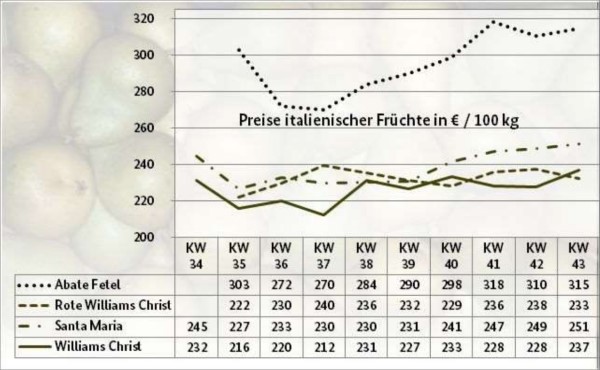 Apples
There was a little movement in the assortment, because the imports from overseas should now be accommodated quickly. Pink Lady from Chile, South Africa and New Zealand were now available at real sell-out prices.

Table grapes
Italian lots formed the basis of the assortment. Overall, business was fairly unexciting. Price shifts were all kept within bounds.

Small citrus
Regarding clementines, Spanish deliveries grew immensely. Increasingly, branded goods were offered, which is why on the one hand the prices were going upwards and on the other hand, price ranges widened.

Lemons
Spanish imports were dominant, South African ones complemented the market. Although supplies were limited, demand was met without any difficulty.

Bananas
In general, their markets were quiet. The supply from ripeners mostly matched the sales.

Cauliflower
Business was unexciting, with supply and demand sufficiently balanced. Traders rarely had cause to change their existing prices.

Lettuce
As a result of reduced volumes, prices of Belgian iceberg lettuce increased noticeably. Domestic items were not consistently convincing in terms of quality.

Cucumbers
Spanish shipments predominated in the case of snake cucumbers. In general, however, demand was satisfied without any effort. Prices developed unevenly.

Tomatoes
Deliveries from the Netherlands and Belgium curtailed, while those from Morocco expanded. Italian, Turkish, Spanish and Eastern European batches complemented the activity.

Sweet peppers
Interest did not always keep pace with availability. The majority of prices trended downward. Only the green batches were able to increase in price, in some places.