Despite some countries suffering from poor conditions during the grapefruit growing season, the general outlook for the fruit is positive. In fact, some places, like Texas, may even benefit from the unusual weather, as less fruit on the trees is likely to improve the quality and size of those that survived. Although grapefruit is not the most popular fruit among households, and is most commonly used in the food service industry, its healthy characteristics could be used to its advantage if the sector plays its cards right. 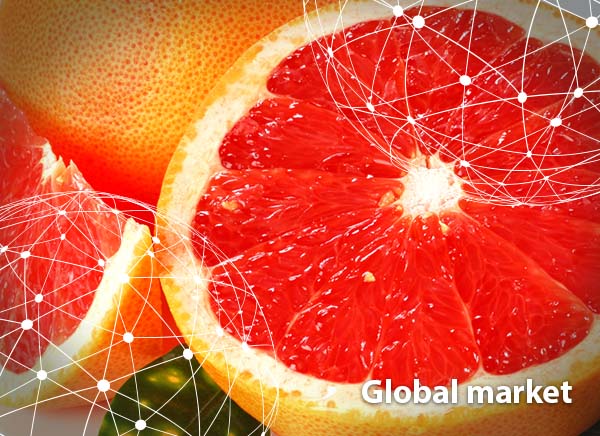 Germany: Demand is stable, Star Ruby is still very popular
In week 43, the grapefruit season began for one trading company with the first goods from Turkey. The season will continue until January/February 2022. The quality of the grapefruit is good. Customers include various gastronomic and catering businesses and a small proportion is also supplied to food retailers.

Although they already offer smaller quantities of grapefruits from Spain, the quality is not yet particularly good. Only from December onwards are the fruits noticeably more red-fleshed on the inside. They only offer the Star Ruby variety, which continues to be very popular.

Demand has remained relatively stable compared to the previous year. There have been no significant problems in logistics recently, but there have been some delivery problems due to a lack of shipping space.

The sales level cannot be compared to those of the past years. The company estimates a decline of about 30-40%. The closures of various gastronomies and thus of former customers have clearly affected them. In addition, the dumping prices in the supermarkets would not encourage customers to shop at the markets.

Italy: 80% of Italian households purchase grapefruit less than once a year
In Italy, grapefruit is only an occasional purchase (2.8 times a year, on average) as they lose out to the competition from many other traditional products, such as apples, oranges, pears, bananas, peaches and apricots, but also due to other growing categories such as avocado, mango and exotics. Grapefruit has enormous development potential in Italy, considering that over 80% of families do not buy them at all within a 12 month period. To make grapefruit more popular, it could be useful to focus on their health benefits: low in sugar and calories, good presence of vitamin C and potassium and above all antioxidant and slimming qualities.

Fresh grapefruit was purchased by 18.9% of Italian families in the last year ending September 2021, equal to almost 5 million households. As for processed products, 9.1% of Italian families purchased a grapefruit-flavored carbonated soft drink in the last year ending in September 2021, a fairly stable trend compared to previous years. The role of grapefruit in fruit juices is more limited: 0.8% of households buy classic grapefruit-flavored juices, 0.9% pink grapefruit. Both percentages have been fairly stable in recent years.

A wholesaler from northern Italy, a specialist in exotic fruit, says that grapefruit has been imported into Italy from the Mediterranean basin for 20 days, while previously it came from South Africa. Israel is the main supplier, but product also comes from Spain, Turkey and Cyprus. The latter nation is experiencing some quality problems.

Spain is more focused on the packaging aspect than others, with single-layer or 10 kg packages, while the classic 15 kg cases arrive from other countries. The wholesale price these days varies between 1 and 1.20 euros/kg. It's a niche product and a supermarket executive says it accounts for 1% or less of the citrus segment.

90% of sales are red grapefruit, 10% yellow or white. In Italy a lot is bought by the catering channel: bars use it as an ingredient in cocktails or for juices, just as hotels use it in breakfasts, particularly for foreign customers.

Spain: Good prices for Spanish grapefruit despite quality concerns
The Spanish grapefruit campaign has been underway since mid-October with the prospect of a lower harvest due to the persistent spring rains, which took a toll on the flowering. The forecasts are good because of the recovery of the food service channel, which will facilitate the sale of lower categories. According to MAPA's forecasts, the estimate for the grapefruit harvest in the 21/22 season is to reach 84,010 tons; 1.25% more than in the previous campaign. It has been a good transition between the two hemispheres. Grapefruits from Turkey keep increasing their arrivals to the markets. Spain overlaps with Mexico at the beginning of its campaign and, particularly with Florida and Israel, since they have similar schedules. Meanwhile, demand remains stable in the retail segment and sales are steady. In the wholesale market, the sales rhythm keeps stable. Therefore, stocks are low and prices show above-average levels. Plus, long-term, the supply of grapefruit should increase due to the evolution of volumes from Mediterranean countries.

North America: Texas freeze could bode well for grapefruit sizes
Following the catastrophic freeze the state underwent in February, Texas is looking at an extremely reduced grapefruit crop for 2021-2022. “However the trees are rebounding and they look good so we’re happy about that,” says one Texas grower-shipper. “And because there’s less fruit per tree, some of the fruit is able to size up a little bigger than it might have.”

The freeze has also affected the start time of the crop - typically Texas begins harvest in late September into early October and goes into the end of March and early April. This year, the crop is about a month behind.

Out of Florida, similar volumes are expected this year on its grapefruit crop compared to last year. “We are seeing good quality on the tree. We had favorable growing conditions and have avoided any storms this year,” says one shipper.

Sizing does seem to be smaller than last year, possibly even to one size down on Florida fruit. “We’re hoping to see some growth in November. We have not had the steady cooler weather that grapefruit desires to naturally bring out the color and raise the Brix but I am happy with the early fruit and know it will get better as the season progresses,” adds the shipper.

This is likely to make for high demand on grapefruit this season. “With Texas being short, Florida knows they will be the main supplier. This will allow us to gain some market share back,” says the Florida shipper.

At the same time, demand is also likely to be strong. However, on imports, there are discussions underway at the highest levels over a recent USDA decision to drop the juice standard for imported fresh grapefruit--one that has long been followed and is still followed by domestic producers.

As for pricing, a strong market is anticipated. “I anticipate a strong market opening and being able to sustain it,” says the Texas shipper. “Typically our busiest time is between Thanksgiving and the New Year holiday because people gift it for the holidays. And then at the start of the New Year everyone’s trying to eat more healthfully. Because of our late start, we don’t expect to have any weakening of the market between our start and the holiday season.”