There is a growing demand for pouches. In the United States, especially, stand-up pouches are more popular than ever. At the beginning of this year, the Dutch company Manter installed a weighing and packaging line at McDougall and Sons in America. In a relatively small area, they can now simultaneously pack different amounts of apples in pouches. 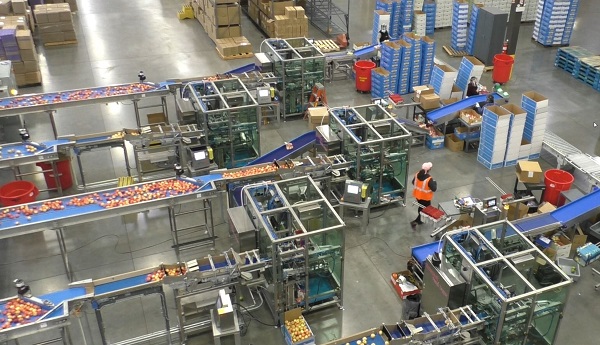 McDougall and Sons is a major apple, pear, and cherry grower and packer in Washington, the top fruit state in the United States. "Our other packing plant is almost 70 years old and, at 6,500m2, is a bit on the small side. We're still operational there," says a company representative.

"But this new packing warehouse gives us all the space we need for further expansion. The new facility is approximately 46,450 m2. It has a Greefa sorting machine, just like our other site. These days it's almost cheaper to buy new machines than to move the old ones." CMI Orchards markets their fruit.

A lot of organic fruit is sorted and packaged at the new packing warehouse. That includes McDougall & Sons apples as well as those from other CMI affiliated growers. "The pears are packed elsewhere. All the fruit goes into bags here. We don't do that much consumer packaging at the old packaging station. There most of it primarily goes in crates."

The company chose Manter's belt weighing machine, the M1 SF and Pouch Filler, to pack the apples into stand-up pouches. That lets them pack more pouches in a smaller area. "It also adds much greater flexibility to our production. We can now run three different weight packs, at the same time, across the three different M1 SF lines."

Time to scale up
CMI is pleased with this new line. The machines run every day. And after six months of trying them out, the time to scale up has come. "These are fully automatic machines, so a single person to operate two machines. Also, the machine keeps running when you need to refill the bags. Yes, we're satisfied with Manter's machines and certainly with the service. They're always open to questions and remarks. For this line, for instance, we exchanged quite a few ideas before everything was entirely to our liking. And with a good result."

Presets mean short changeover times
Manter's Software Engineer Hilbert Elsinga was closely involved in this project. "Each line has a weight checker that connects to two Pouch Fillers. So you can determine which weight you want to run for each two Pouch Fillers. Without much changeover time. The Pouch Filler has an advantage. You can use standard bags, which are in stock everywhere. You never know what bags they're going to run," he explains.

"These machines reduce changeover times. And you can set up packages from one to 4.5 kg with the push of a button. The weight checker has all the different settings preset. The Pouch Filler and the M1 SF take over the preset and set themselves. The operator, therefore, has short changeover times. One packing line with two Pouch Fillers runs 24 to 30 packs per minute, depending on the product and weight." 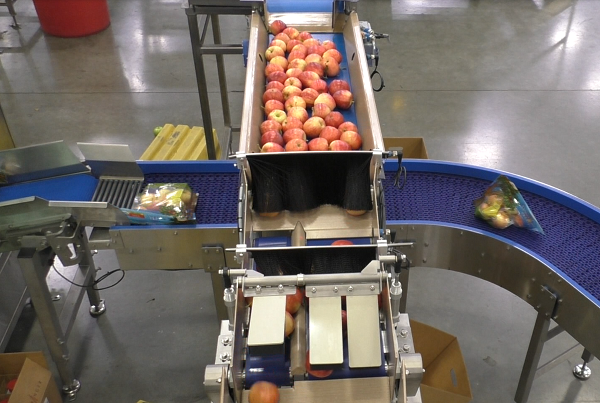 Manter added the M1 SF to its range at the end of last year. This belt weigher can weigh sorted fruit like apples at a relatively small investment, by the company's reckoning. "This smart weigher has an integrated dosing unit. That determines the sorted products' correct final weight. There's, therefore, never too little going into the bag, and being overweight is minimized. That's vital to packers," says Hilbert.

This machine also allows accurate, fast dosing, thanks to a wide and narrow feed and dosing belt. The wide belt quickly conveys a lot of product onto the weighing belt. The second narrow feed belt then adds the apples one by one until the final weight is reached.

Another advantage is that during the weighing process, the machine reduces falling heights to a minimum. So, you can use this machine for fragile fruit like apples and pears. "Continuously supporting the product is an important starting point for this machine. The product must fall as short a distance as possible. It uses things like brushes and flaps to move the products along as quickly, but as gently, as it can," continues Hilbert.

More demand for Pouch Fillers
Manter International develops and manufactures weighing and packaging machines for fresh fruit and vegetable products. This machine builder also offers customized solutions for weighing or packaging questions on request. This is not the first time Manter has partnered with McDougall and Sons via their dealer, Volm Companies. Manter has supplied several other machines to this company in the past. 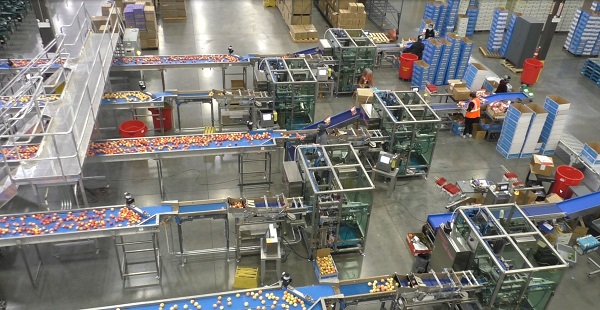 That includes M14 SF weighers (a 14-scale combination weigher especially for fruit), M12iV weighers (a 12-scale combination weigher), and Clamshell fillers (for automatically filling and sealing punnets and clamshells). McDougall and Sons used these machines to weigh and pack cherries. Aside from the Pouch Filler, the company uses Manter's WB-SF to pack apples into wicket bags.

"Wicket bags are currently becoming increasingly popular. Not only for packing apples and pears. Cherries and citrus, for example, are also increasingly being offered in pouches. Stand-up pouches are doing especially well in the United States. There's a lot of demand for the Pouch Filler. Also because - as mentioned - this machine lets you use other bags too - both pouch and normal foil bags," Hilbert concludes.