On 28 and 29 October, BelOrta went all out with its annual Product Show. The cooperative displayed the most attractive and special varieties from the fruit and vegetable world for all to see. People not only got to see these products, they got to taste them too, as fresh or processed in a delicious dish or cocktail. The Belgian fruit and vegetable cooperative displayed the products in a warehouse, using thousands of EPS folding crates.

Tomatoes
First up at the Product Show - tomatoes. A wide variety of tomatoes was on display. "We test more than 100 new varieties every year. And with a bit of luck, one or two go into production," says a BelOrta's Glenn Sebregts. "We're always looking for the latest solution. You have to; else you'll be left behind."

Newcomers include Ruby Red and Scarlet Red tomatoes. These vine and beefsteak tomatoes are a deep red color on the inside. They have a naturally higher Brix value. That gives them a fuller, sweeter flavor. Visitors could, of course, put these to the taste test. 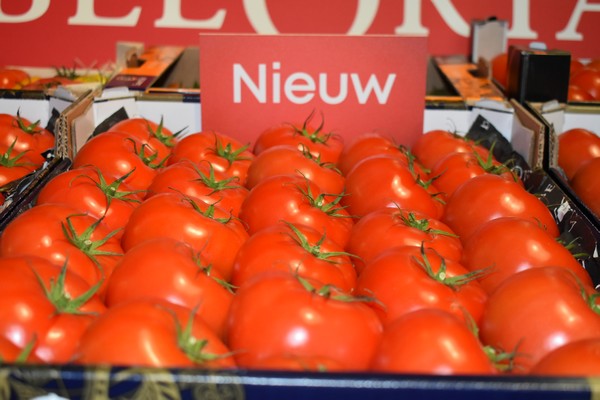 Leafy vegetables
BelOrta counts a vacuum cooler amongst its infrastructure innovations now. This machine is used for cooling lettuce, in particular. The product is cooled to the core in the driest possible environment. That can extend storage by about three to four days - quite a lot for leafy vegetables. 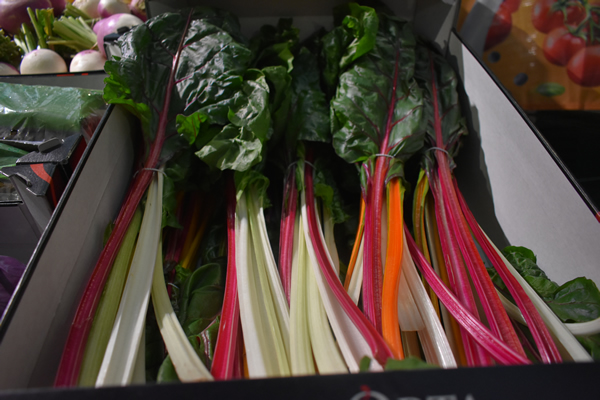 Chicory
Chicory is a fairly commonplace vegetable in Belgium. "But for Asians, it's an exclusive product," says Glenn. The friseline variety is somewhat better known in France. BelOrta is, however, also the place to go for this culinary bestseller, grown in Belgium. This chicory variety tastes slightly more bitter. And because of its beautiful appearance, it is mainly used in the hospitality industry. 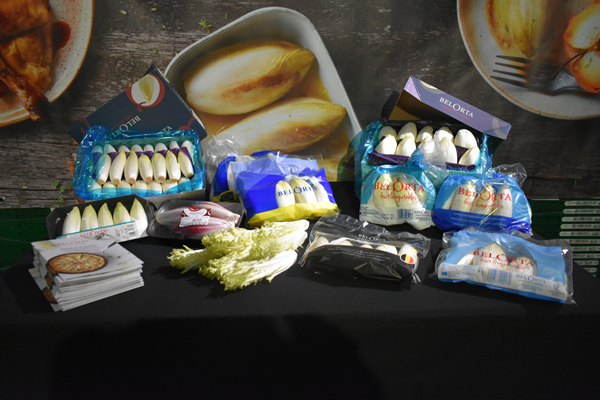 Full soil vegetables
The purple and orange cauliflowers were especially striking. "These cauliflowers grow like this naturally. However, this type of cultivation is often done less frequently. Consumers still have to discover and learn to appreciate such special products." 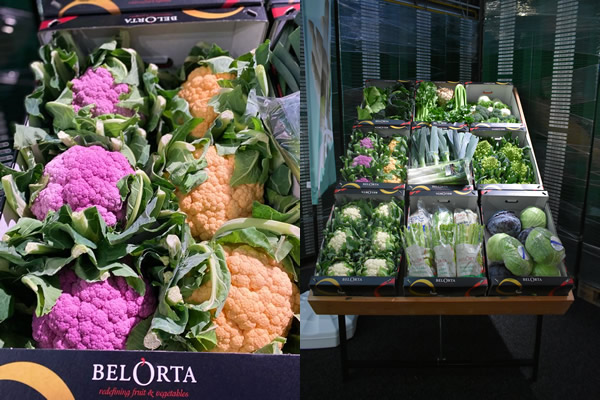 Organic
"BelOrta's organic range is ever-expanding," adds Glenn. Newcomers include green and white asparagus. Green asparagus does not need to be peeled, so they are easier to prepare. They are, therefore, becoming increasingly popular. 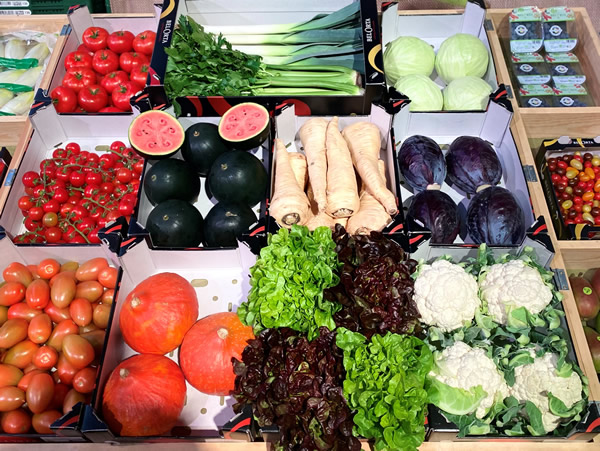 Growers who switch to organic farming incur additional costs. And it takes three years before a product can be labeled organic. During that time, growers must still sell their product as conventional. For those growers, BelOrta has set up the EARTH concept. Transitioning growers do not have to sell their products as conventional. These products are offered as on the way to organic.

Pumpkins
Pumpkin season is in full swing and will continue until spring. The giant pumpkin always draws much attention at the Product Show as it did this year. These pumpkins can weigh anything between 100 and 800kg.

Top fruit
Fred is a new addition to the BelOrta top fruit family. This blushed pear is a cross between the Harrow Sweet and Verdi. It tastes similar to a Durondeau. It is a robust variety, which is not susceptible to bacteria and is more disease-resistant. BelOrta growers have planted 14 hectares of this variety. In the Benelux, that is about 100 ha. 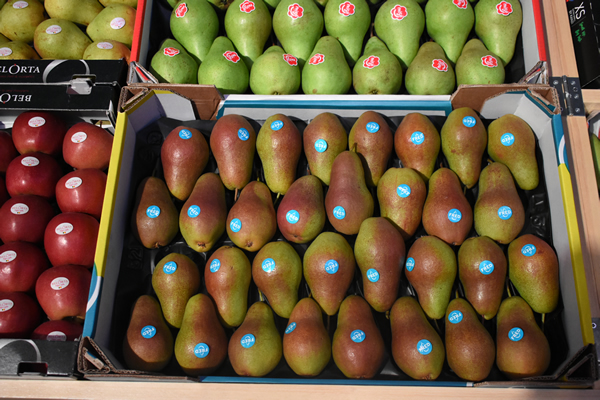 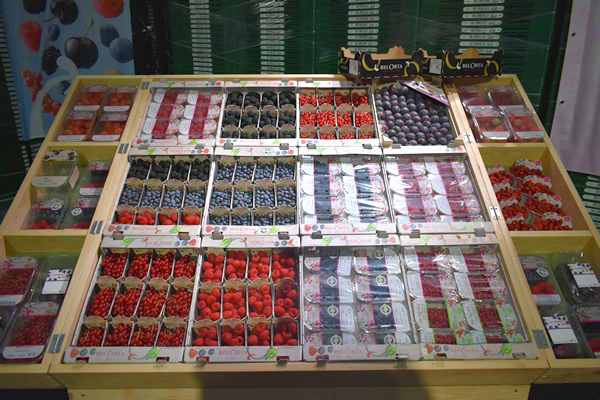 "Plums, too, are back in the assortment. It is a true plum revival. Belgian consumers have returned to local plums in full force in recent years. BelOplum is BelOrta's own variety with a season that runs from approximately mid-September to late October." 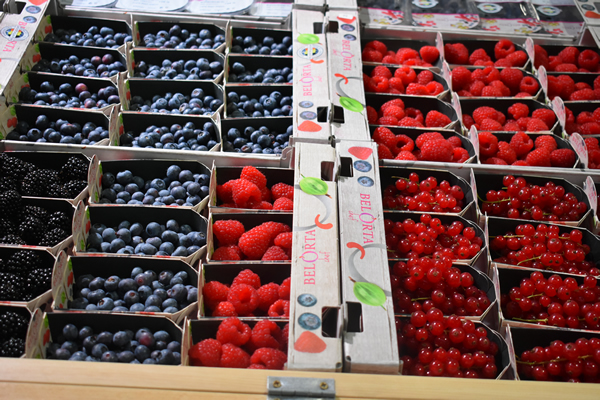 Packaging
Belgian fruit, like blueberries, struggles to compete with imported products. That's why the cooperative developed a common logo. Several Belgian suppliers use it to indicate that a product is locally grown and truly Belgian.

Pre-COVID-19, the more exclusive fruit was generally not packaged. And supermarkets and stores sold the lesser-quality products in packaging. During the pandemic, that changed, and more products were packaged.

Packaging, therefore, had to be provided for all those top-of-the-range products that were normally sold loose. "That required a lot of adjustment," says Miguel. Now, several new packages, including one for premium cherries, have been developed.

Live tasting
Visitors could taste all the fruits and vegetables. A cocktail bar and the BelOrta Greenhouse - a greenhouse/food truck combo - created special cocktails and dishes. It, naturally, starred the Belorta range.