The rain has arrived in California.

Following a summer of record heatwaves, the state’s growers and shippers are assessing how the weekend’s intense rain will affect commodities. “As always, we welcome any and all rain,” says Alex Teague of Limoneira based in Santa Paula, CA. “For the most part, while it is raining here currently very lightly, the heavy rain is in the mid to Northern part of the state. While it will keep us out for a day or so, it is nice to have some rain.”

What the full rain’s effects are remain to be seen. “We are in the middle of planting our winter varieties in Firebaugh, CA,” says Jessica Peri of Peri & Sons Farms, who is located in Yerington, NV. “The rain will delay us up to a week depending on actual rainfall.”

Over at Markon, Mark Shaw, VP of operations says the immediate effects of the rains on commodities ranges. “Value-added iceberg and romaine salads will start to see pinking on the cut ends of the product due to excessive uptake of water. Commodity packs of iceberg and leaf items could also see pinking on the cut end of the head and running up the ribs of the leaves due to excessive uptake of water,” he says. He also notes that while broccoli and cauliflower should be fine, some pin rot could show up on broccoli heads. “Celery, depending on how much water fell on the celery fields, could see some light pith show up,” he says. 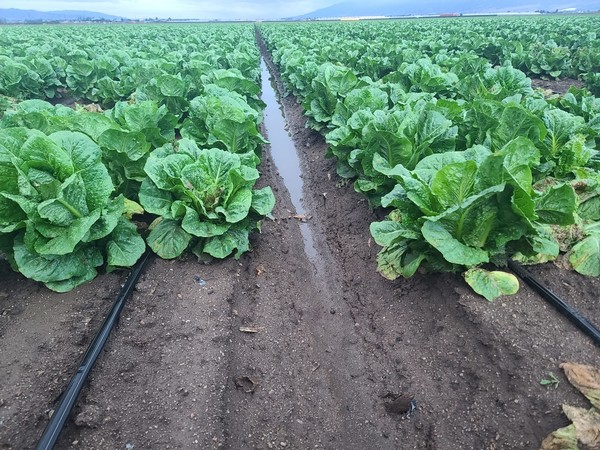 Salinas-Watsonville strawberries
The rain undoubtedly had an affect on strawberries. “The Salinas-Watsonville strawberry deal is virtually over, though they were right at the end of it anyways,” says Steve Johnston of G.W. Palmer & Co. Inc. in Salinas, CA. Given there’s not much volume coming from other strawberry growing regions such as Santa Maria and Oxnard, the market is going to be very strong. “Central Mexico is two to three weeks away from harvest. Strawberry supplies are going to be very light for the next three weeks,” says Johnston.

The rain’s effect on pomegranates is also concerning, particularly given the California pomegranate crop was already down thanks to severe winds that caused some scarring on the fruit. Levon Ganajian at Trinity Fruit Sales in Fresno, CA notes the water is turned off on pomegranates just before harvest to bring the sugars to the fruit and when the rain hits water-stressed fruit, it captures the water and swells the arils and cracks the fruit. “With this rain, we could be down 30-40 percent. It made a short crop shorter,” says Ganajian.

He also laments the timing. “We’re in the heart of harvest right now, which is about a month long,” says Ganajian, noting the San Joaquin Valley saw .5 to 3/4 of an inch of rain. “It’s not unusual to have that in November and normally we don’t have this all at one time. It’s the worst timing. If this had happened two weeks from today, we would have had everything harvested.” He does add that it will take a few days to figure out how and if the fruit was affected by the rain. 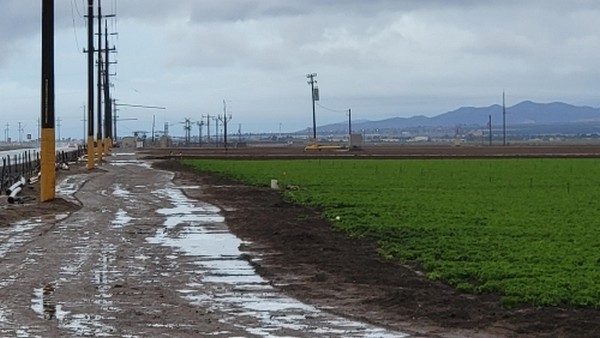 Rain’s affect on the week
Meanwhile back at Markon, Shaw said that while yesterday’s harvest of iceberg and leaf items was cancelled, most growers did harvest last week ahead of the rain. “So yesterday’s orders will be filled but there may be some shortages for today’s orders. Broccoli, cauliflower and celery harvesting may occur, but only in a light way,” he says. “The finished product boxes will have both mud on the inside and outside of the boxes. Markon inspectors will do what they can to minimize the mud, but there will still be some found.”

Looking ahead, the rain does look to be letting up. Shaw notes that while current weather forecasts are for California’s Central Coast to have for dry weather and warmer temperatures through the week, in turn iceberg, leaf items, broccoli, and cauliflower markets were already elevated, and will continue to remain elevated through mid-November.

All of this does leave growers feeling positive about what lies ahead. “It does look to be leaving plenty of snow in the North which is always helpful,” says Teague.

“The benefit of this storm is the potential to add to next season’s water allocation if water is captured and stored and not allowed to be released into the Pacific Ocean. There’s also hope for a heavy snow pack could potentially benefit next season,” says Tom Conrado of Classic Fruit Co. in Fresno, CA.