Prospects for the upcoming persimmon campaign are bittersweet, given the drop in the production that will be recorded in the Region of Valencia, both due to the impact of hail in the region and the damage caused on farms by the rapid spread of the "cotonet"; a pest that is causing losses estimated at tens of thousands of tons. However, the campaign in other Spanish producing regions, like Extremadura, is looking better.

"In Badajoz we have 100 hectares of persimmons in production, all of them in full yield, and this year we expect a normal campaign, with a production ranging between 2.5 and 3 million kilos," says António Gomes Pereira, from the commercial department of Sol de Badajoz. "We produce our persimmons and other fruits under netting. We have made a very considerable investment to cover the 2,500 hectares that we have in order to protect the fruit we produce." 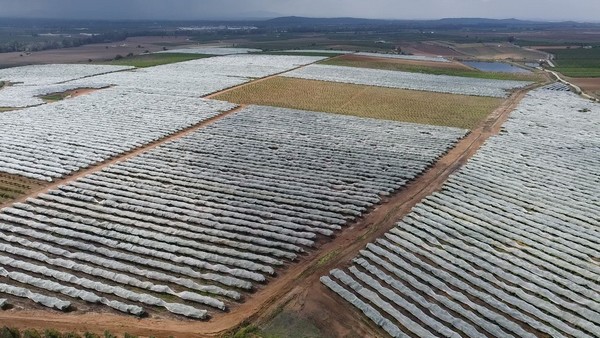 "The netting system is placed directly on the trees, wrapping them and protecting the fruit inside. With this system, we prevent the impact of inclement weather, such as hail or torrential rains, from damaging the branches of the trees and their fruit. It has also allowed us to avoid diseases spread by insect vectors, as it prevents them from coming into contact with the fruit," says António.

"Moreover, the netting allows the temperature inside to rise by about 2 degrees Celsius compared to the external temperature, which leads to greater earliness. Also, since the fruit is protected, the air does not move it and damage is minimized. With this system, we manage to harvest cleaner, healthier fruit, more uniform in terms of color and also earlier arriving," says the professional.

The Extremadura-based company, located in the municipality of Villanueva de la Serena, produces 100% of its fruit in Extremadura, on farms in both Vegas Bajas and Vegas Altas, where it grows a wide range of stone fruit, including plums, nectarines, peaches, flat peaches, persimmons and pomegranates. In fact, the pomegranate campaign is in full swing. "This year's pomegranate production is going well. We have practically finished with the first of the varieties we grow and this week we started with the next one. Eighty percent of our production is intended for export and reaches markets in four continents: Europe, America (both South and North America), Asia and Africa (South Africa, Morocco and Egypt)," says António.

Extremadura is an important fruit-producing region in Spain. Its geographical diversity, with all kinds of environments, from fertile plains to mountainous areas, and its soil and climatic characteristics allow it to host the production of numerous fruit and vegetable species, which thrive in the region's stable climate. Persimmons, which Sol Badajoz mainly exports, benefit greatly from these advantages.

"The forecasts for this campaign are good, given the data that are arriving from Valencia, where losses are reported, but we have to see how the markets respond. In the end, the consumer is the one who can make a product a success," says the commercial director of Sol de Badajoz. "However, we have already received many signs of interest. At the Fruit Attraction fair, many people have asked us when we are going to start selling them."