The Dutch bell pepper season is almost over, and "we can gradually begin reflecting on its highs and lows," says Marco Bergman, a salesman at Harvest House. "Just like the previous season, this, too, is one to remember. It began very well, became very difficult, and ended even worse. It was a season in which the supply peaks and troughs were more decisive in setting prices. At a time when demand was affecting the entire season." 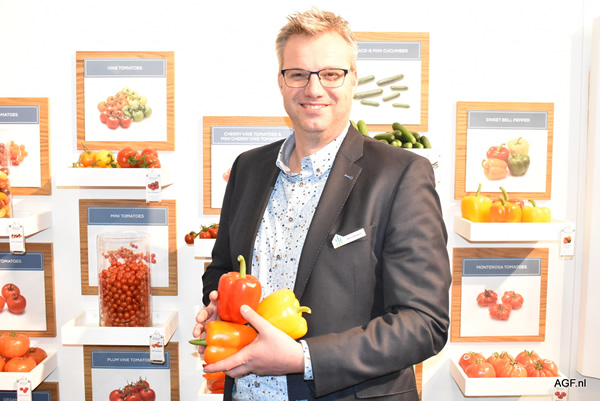 European retail programs began early
"It began with European retailers starting earlier with Dutch pepper in their programs. They really wanted to begin sooner with these products because Spain had had difficult cultivation and winter weather. We had bell peppers available fairly early in the year, so we could help many retailers get Dutch bell peppers quicker."

"The extended middle part can best be described as difficult. Supply rose and fell considerably, which caused plenty of price unrest. Prices never remained stable for more than three weeks. Unfortunately, there was often far more product available than we could sell, which in turn led to a tough price period. From a cultivation point of view, this was generally not a great period, price-wise," says Marco.

Decreased consumption
"The weather wasn't very favorable in the Netherlands either. That was actually the case throughout our European sales area. The poor spring weather and the wet summer also led to lower-than-expected bell pepper consumption, despite 2020 having been a particularly good bell pepper consumption year. Admittedly, that was caused more by the pandemic and the associated 'enjoying meals at home'."

"This year, increased store sales dropped slightly again to pre-Covid-19 levels. Nevertheless, we can conclude that we sold proportionally more packaged peppers than we'd expected. There are diverse packaging forms -  from a single or more than two bell peppers in foil to one kg bags, and they have all won permanent spots in various European supermarkets' assortments," the bell pepper seller notes.

Short-lived price surge
"We're now nearing the end of the season, which is characterized by moderate prices and most retail programs falling away. What's happening now isn't unusual; it's happened before. This year, however, prices surged for a short while, right before the true end of the season, but that was over by the beginning of week 42."

"Bell pepper sales outside of Europe were difficult throughout the season. For the second year in a row, those to the USA were particularly disappointing. Transport costs are very high, and there's been more local/North American cultivation," explains Marco. "So the Netherlands sent few or no bell peppers there. This is a loss for total sales of this product. Of course, we keep hoping peppers will regain their spot on planes. That's when flying to the US picks up and becomes cheaper again."

Impact of gas price still uncertain
The energy crisis is, naturally, being discussed in the bell pepper growing sector too. "The rise in gas prices will undoubtedly affect cultivation. What exactly this will entail is, however, still very unclear. That's both for cultivation and for us, as its sales tool. But we'll never give up. We're already making new plans for the upcoming bell pepper season, and we're confident about the future," Marco concludes.