Danish research and analysis firm Sea-Intelligence has looked into whether the ongoing container demand boom in North America is sustainable. "Historically, the rate of growth in spending in services has consistently exceeded that of goods," said Sea-Intelligence, which used data from the US Bureau of Economic Analysis (BEA) to carry out the analysis. "To see the level of decline in consumer spend needed to bring it back in line with the trend, we need to factor in the relative share of goods and services.” 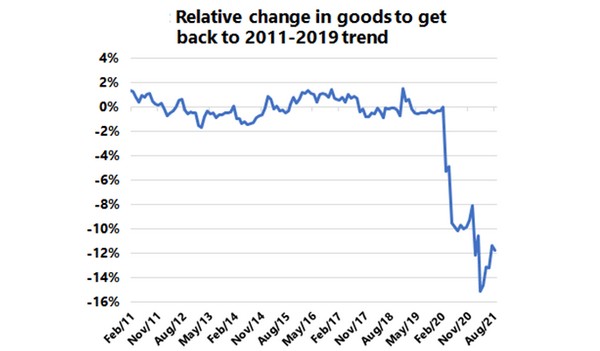 "There has already been some correction taking place until August 2021, where the 'gap' has been reduced to 12%," stated Alan Murphy, CEO of Sea-Intelligence.

"The baseline assumption going forward must be that consumer spending patterns will normalize and the timing is much more difficult to ascertain, as this depends in part on the development of the pandemic itself," noted Murphy, who went on to add, "However, that it might be instructive to look at the period after the financial crisis, where it took a little over two years from peak impact, until full reversal to the long-term trend."

According to the analysis, the reversal might therefore not appear as a sudden shock to the container flows, but potentially as a more gradual correction taking place over a couple of years.