The Wonderful variety of pomegranates out of California is seeing a slightly later start this season.

Normally harvest begins on the variety the first week in October. “But with the heat this year and there’s also been a lot of smoke in the valley, we’ll start next Wednesday,” says Levon Ganajian of Trinity Fruit Sales in Fresno, CA.

He adds that along with the late start, sizing might look somewhat different this year as well. “We normally peak on the 22 sizes but it looks like it’s going to be more 22/26 so a bit off in sizing. Some blocks where there are 22s, we’re seeing peak sizes on 30s,” Ganajian says. “It’s going to be a tough year on sizes. Some customers for example like the great big sizes like 18s and it’s a big challenge on those They’re not going to be as plentiful as we thought.”

For Trinity Fruit Sales though, Wonderful pomegranates, of which it carries organic and conventional options, are coming on just as it’s finishing up its proprietary Israeli varieties, the Emek and Aco, which began in September. “That variety finishes up this week and we were up this year about 20 percent That’s primarily due to new plantings coming into production,” says Ganajian. “But since we’re not finished with that variety, the late start on Wonderfuls will give us a few extra days to move the rest of that early crop.” 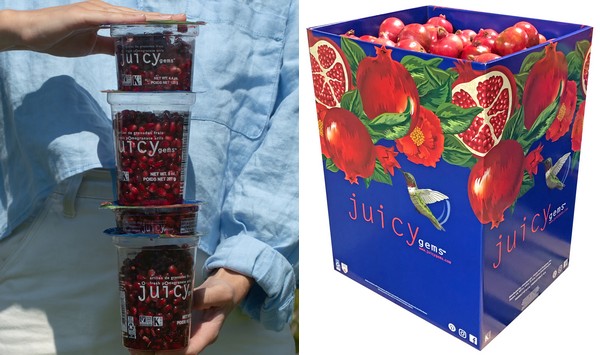 Fresh and arils
Wonderful harvest goes for about a month and Ganajian believes it will have supplies in storage through December. Along with fresh pomegranates though, Trinity Fruit also has its aril business for #2 fruit. Trinity carries domestic arils, which are available frozen and dried, until April. It is also on the cusp of introducing its juice program, which includes private label juices, which are a blend of juices from the early varieties and the Wonderful variety.

As for demand on pomegranates, Ganajian notes that every year demand gets stronger for the fruit, even though players in the pomegranate deal are fewer and fewer. “And the biggest thing about pomegranates is the changing demographics in this country. It lends itself to pomegranate demand because more than half the country haven’t even had pomegranates so the potential for growth is there,” he says.

Meanwhile as for pricing, it’s anticipated to be higher this season. “Overall costs have gone up and the accumulation of all of that means pricing will be higher by five to 10 percent I think,” says Ganajian.