The 2021/22 marketing year is underway for many non-citrus fruit crops. USDA’s National Agricultural Statistics Service (NASS) forecast 2021 apple, grape, peach, cranberry, and sweet and tart cherry production up but forecast pear production down. For many crops, the impact of record high heat in some areas and California’s on-going drought is uncertain. Producer prices fluctuated throughout  2021 but are generally slightly above 2017–19 levels. The 2020/21 US citrus season finished with declines in all citrus commodities except California tangerines, likely contributing to higher citrus prices for the season. US tree nut supplies in 2021/22 are forecast down from last year’s record. Smaller crops of almonds and walnuts due to severe weather and drought conditions are likely to increase grower prices for these crops. 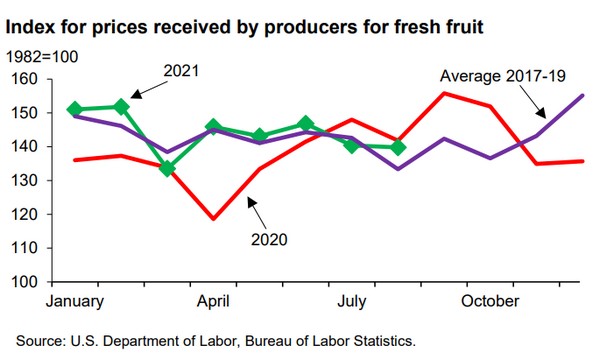 US pear crop forecast similar to last year with losses in Washington and gains in Oregon and California: In early June, before the heat dome in the Pacific Northwest, USDA NASS predicted the 2021/22 (July–June) pear harvest to be 670,000 tons, down less than 1 percent from the previous season but lower than the 2017–19 crop. Washington, the largest pear producer in 2020/21, is expected to have 19 percent less production than the previous year.

Production in Oregon and California is expected to be up 10 percent and 39 percent, respectively, in spite of earlier production problems, which included drought in California and freezes and/or stinkbug damage in Oregon. In previous years, the combined volume of California and Oregon in both the fresh and processed markets was about equal to Washington’s fresh and processing production. The Northwest heat wave may have some negative impact on production levels, but growers are waiting to see the whole harvest before trying to assess any damage.