Persimmon, citrus and almond trees, among the most affected crops

Another hailstorm hit 17,200 hectares of crops in Spanish Region of Valencia

Last weekend, the agricultural sector in the Spanish Region of Valencia was affected by another hailstorm that hit approximately 17,200 hectares of crops throughout the province of Valencia, according to initial estimates of the Valencian Association of Agricultural Producers (Ava-Asaja).

The hardest hit were the areas of Casinos, Llíria, Domeño and part of Pedralba, with around 8,000 hectares of damaged persimmons, citrus, and almond trees and vegetables that were ready for the harvest. Hailstones of considerable size hit the crops hard, causing the fall of fruits, defoliation and damage to the wood. As for the degree of affectation, Ava-Asaja estimates that the extent of the damages is highly variable, with some fields having lost practically the entire harvest. 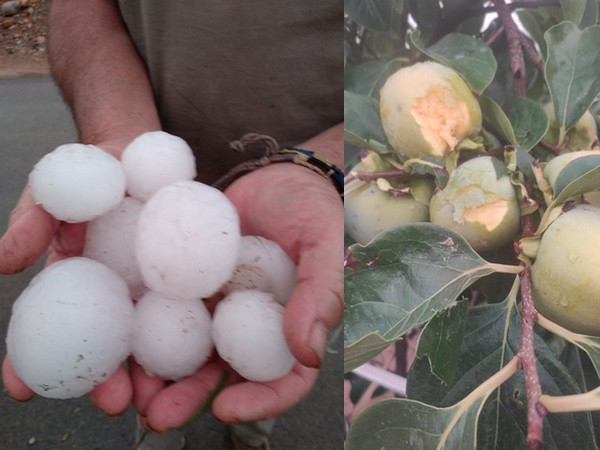 The municipalities of Picassent, Alcàsser and Silla have also recorded significant damage to citrus, persimmons and rice. In Picassent, most of the damage has been reported in the Terra Bona area, in persimmon and citrus fields. In these three towns, the total area affected amounts to approximately 5,000 hectares.

Meanwhile, the regions of La Canal de Navarrés and La Costera have suffered damage to various extents, with the most noteworthy being the approximately 900 hectares that have been damaged in Enguera, especially in olive grove farms, with damages that could reach 75% of the harvest. Also, the municipalities of Montesa, Canals, L'Alcúdia de Crespins or Bicorp have had about 3,300 hectares affected, especially persimmon fields, where the harvest was in full swing.

Faced with this new climatic adversity at such a critical time of the different agricultural campaigns, Ava-Asaja is asking the administrations for fiscal measures and financial assistance to the producers in the affected areas. Also, the entity asked Agroseguro to begin making the necessary damage reports as soon as possible.