'Increased export volumes to the Balkans and the Baltics'

Demand in the food retail sector is somewhat more restrained. The supply in Rhineland-Palatinate still appears to be sufficient, and so far there has been no need for additional purchases from other growing regions. Stronger sales in direct marketing are expected as a result of the autumn storage campaigns. According to reports the Rhineland-Palatinate Chamber of Agriculture, quality is mostly decent and the prices unchanged from the previous week. 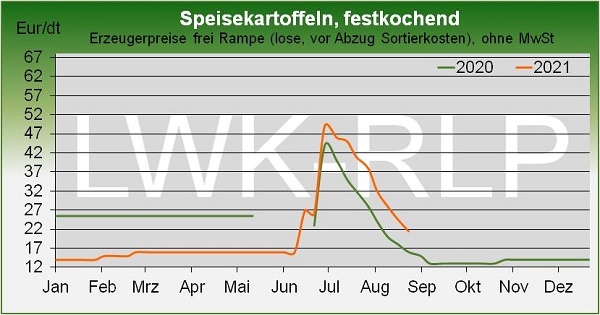 Hesse: Large supply, slow demand
The State Agricultural Office of Hesse reports that an extensive supply is meeting a slow demand. Supra-regional supplies are pushing into the local market and putting pressure on prices. At least the prices on the spot market can just about hold their ground compared to the week before. Although the clearing work is progressing well, quality is suffering in part from wireworm infestation. In some cleared areas, late blight and brown rot had formed. These lots require increased sorting efforts or are rejected. 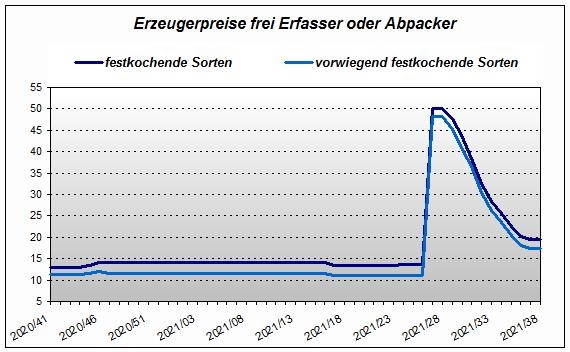 Lower Saxony: Hardened potato beds
The harvest continued to progress well says the Lower Saxony Farmers' Association. Due to a lower tuber set, the potatoes are larger on average. In addition, the increased rainfall in the spring has hardened the potato beds, resulting in burst beds and more green potatoes than in previous years.

Schleswig-Holstein: 40-50% harvested
According to the report of the Schleswig-Holstein Chamber of Agriculture, the main harvest is in full swing, with good rooting conditions. About 40-50% of the tubers have already been harvested. Yields are still estimated to be about average to slightly below average. In Germany, yields are very heterogeneous, depending on the individual cut and the variety. The quantities on offer are more than sufficient to meet demand. The price level is again dropping slightly in some regions. However, the first federal states are also reporting stable prices, which could be a sign that prices could also stabilize in this country. However, there are also shaky lots that are coming under price pressure with regard to blight and wireworm infestation or are being absorbed more strongly. Continued reduced sales opportunities are reported for the peeled potato sector. Exports are running at a higher level compared to other years earlier. Target regions are the Balkan states and the Baltic states.