The Dutch company, OTFLOW, recently carried out a study, along with Visa S.A., one of the largest pineapple exporters in Costa Rica. OTFLOW wanted to see how their technology can improve container temperatures and fruit quality. The OTFLOW is an air distribution mat for refrigerated containers. It optimizes air circulation in the container.

"We tested it on 50 shipped containers. We put the mat in only 25 of them. Each of the 50 containers had multiple temperature sensors. So, we were able to measure temperature differences between the front and back of the containers. We always promise a 30% improvement in that difference. But, ultimately, the mats proved to be much more effective," says CEO Ronald Hagenstein.

The experiment showed that the OTFLOW  mats are particularly effective on three fronts. "We reduced the temperature difference by 61%. The pineapple stayed within the ideal temperature range 67% more often. And several importers said the OTFLOW mat had benefitted the fruit's quality."

Containers without the Otflow mats' temperatures fluctuated by, on average, 1.8º C. Those with the technology's temperatures registered changes of only 0.6 ºC. That is a 67% improvement. 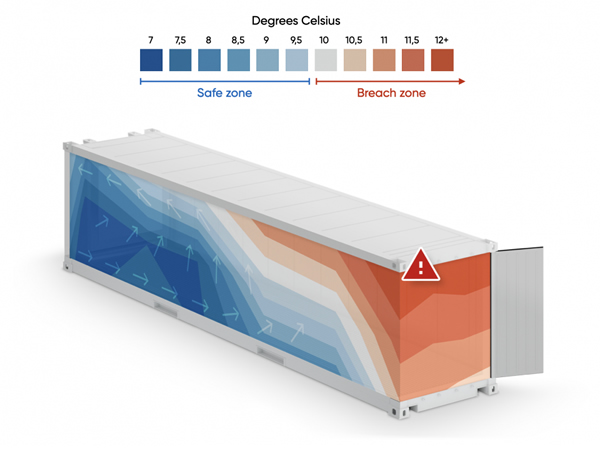 The test showed that the temperature in the 25 containers without the Otflow technology rose too high 788 times. In those with the mats, that was 311 times. That is a 61% improvement.

Various importers also saw the advantage of using the Otflow mats. "The containers containing the OTFLOW mats arrived in good condition. They had homogenous fruit throughout. With the containers without Otflow, the fruit at the door's quality differed. They were riper," says Orlando dal Bosco of Italy's Italfrutta Di Manno S.R.L.

Mercadona's quality controller, Diego de Los Teyes González is convinced of this mat's advantages too. "The fruit from the OTFLOW container was in a better internal and external condition."

The Otflow team will be at the trade show in Madrid, Spain, from October 5 – 7. They will be in Hall 10, G04. You can already make an appointment to visit them via sales@otflow.com