According to Agreste, the statistical service of the French Ministry of Food and Agriculture, the decline in production is favoring a rise in peach prices.

“On September 1st 2021, the peach production was down by 19% compared to 2020, and down by 26% compared to the 2016-2020 average, as a result of the historic frost that hit all producing regions last spring. It is the lowest yield in 23 years. The limited offer keeps prices higher than in previous years. Nevertheless, the rise in prices has not compensated entirely for the low volumes. The provisional national revenue, from June to August, is down by 2% over a year, with wide disparities between regions.” 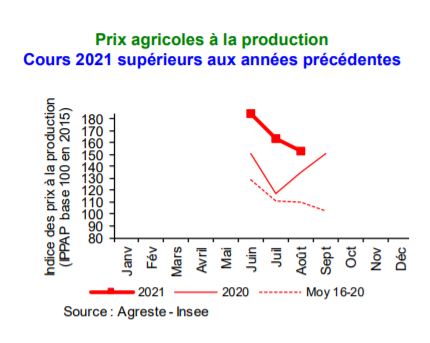 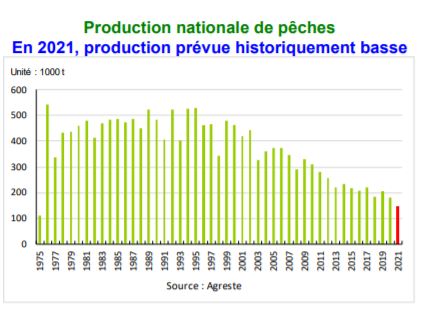 The Roussillon area was relatively spared. In Paca, the frost caused significant damage in the Vaucluse, where the vegetation was already advanced. In the Bouches-du-Rhône, the production was less impacted. In the Rhône Valley, the harvests are ending in most orchards. The sanitary state is deteriorating (oidium and drosophila). The spring frost was historic in intensity (down to -10°C) and in duration. The trees did not give a lot of fruit. The calibers were relatively large in the orchards that were spared. The production is divided in half. According to MEDFEL, the European production for 2021 is the lowest in at least 30 years. The frost hit the main peach producing countries in Europe. For the second consecutive year, the harvest in Italy is reduced, with 43% less than the 5-year average. Greece only has half a harvest. Spain estimated its harvest will be reduced by a fourth compared to the 5-year average.

June to August: French revenue is down
The provisional French revenue from June to August 2021 is 2% lower than in 2020. In many basins, the overall price increase did not compensate for the decrease in volumes. The revenue is lower in the Rhône Valley (-46%) for the third consecutive year and lower in Provence (-23%), but higher in Languedoc and Roussillon (+14%).

In August 2021, prices went down slightly from one month to the next, and were still clearly higher than the 2016-2020 average. The demand was sustained and the offer dominated by nectarines (mostly smaller calibers). The Spanish nectarine supply was low. The delay in production is confirmed with volumes that will be present until mid-September.

In July 2021, prices remained higher than in previous years. There was more demand for nectarines than peaches. Consumption was more active in Provence, where the temperatures were the highest. The promotional actions in supermarkets facilitated the fluidity of the market. There were mostly small calibers while the demand was more interested in the larger calibers.

In June 2021, prices were firm compared to previous years (+22% over a year and +43% compared to the 5-year average), as a result of the reduced offer. The campaign started in the Roussillon, with some delay compared to 2020, followed by the Gard and the Crau. The market was dynamic for nectarines, contrary to peaches, which were the focus of promotional actions in supermarkets. Imports from Spain were lower than in previous years, especially for peaches, as a consequence of the frost that hit the country in the spring.