The invitation promised there would be an 'amazing surprise' and, when the helicopter flew over the Val Passiria glaciers glistening in the sun, it was clear why creatives came up with the 'figlia delle Alpi' (daughter of the Alps) claim for Marlene. 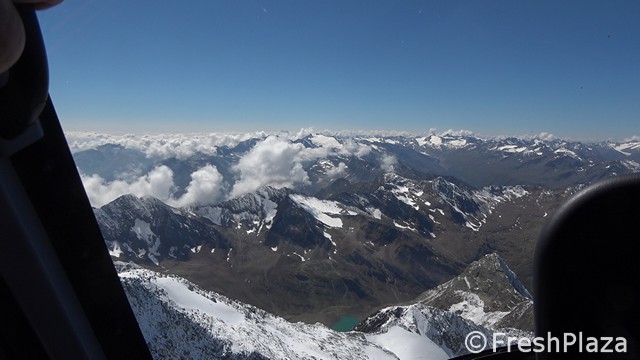 A few hours earlier, around twenty Italian and Spanish journalists had a preview of the first brand commercial at the historical Roter Salon of a hotel in Merano. The territory protected to the north by the Passiria Alps, which near 3500 m asl, and illuminated by two thousand hours of sunlight a year, has led to the development of apple orchards covering over 18,400 hectares - the largest closed area producing apples within the EU, growing half of the domestic harvest. 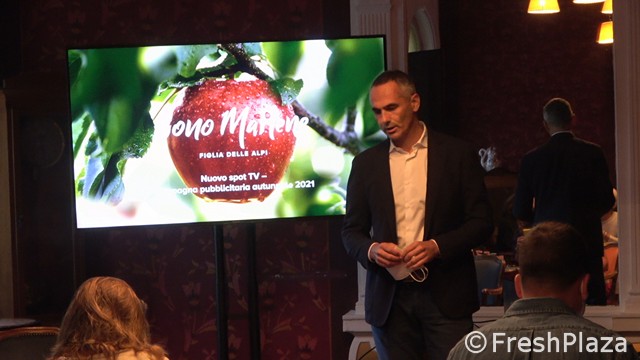 Walter Pardatscher, general director at Vog, the Consortium of Cooperatives in Alto Adige which also commercializes the Marlene brand, illustrates the new marketing campaign to those who attended the press tour. Click here for the full photo report.

Eleven thousand of these hectares are cultivated by the Vog consortium, owner of the brand, which harvests 3 billion apples every year, i.e. 450thousand tons including 13 PGI varieties. Orchards are located between Salorno or the banks of the Caldaro lake 200 m asl and the over 1000 m asl of the peaks surrounding Merano or Bressanone, with a variety of microclimates that means harvesting operations last three months - between mid-August and mid-November. 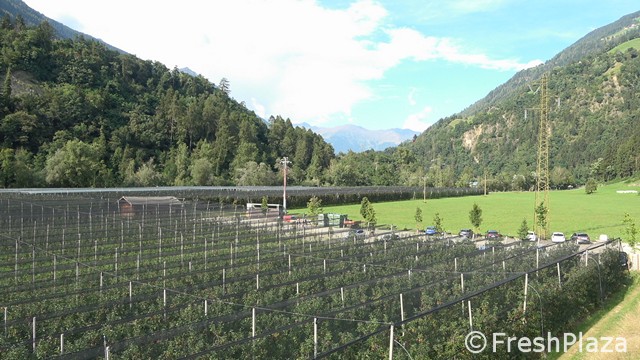 From Pink Lady, which blossoms first and ripens later, to the more "mountaineer" Envy. Harvesting operations started with Gala, SweeTango and the first Golden, then it will be the turn of Red Granny. 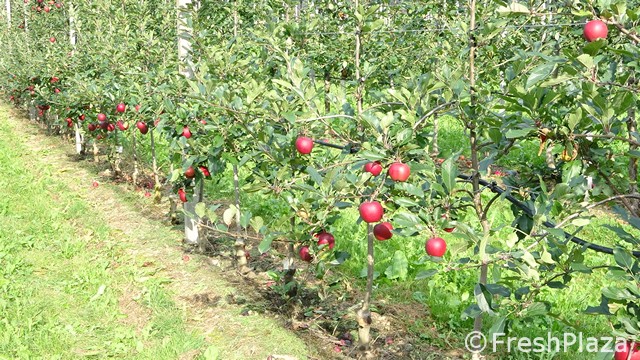 "It will be an average year on a European level. The increase in Polish volumes (though the country does not place all the produce on the fresh produce market) is offset by a drop due to frost in France. We are experiencing a 4% drop compared to last year, but we are trying to maintain a certain stability thanks to drip irrigation, anti-frost systems and anti-hail nets on over 60% of our orchards," explains Vog marketing manager Hannes Tauber when commenting the recent Prognosfruit report. 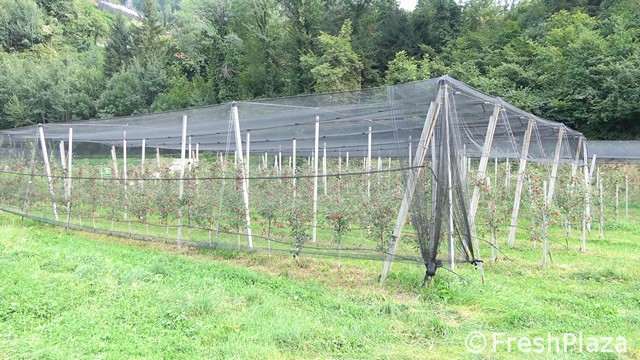 Yet the Adige plain used to be a swamp. The current landscape started appearing in the late 1800s when the course of the river was modified. Corn replaced vines, as it was cheap food and helped reclaim marshy areas. The land needed to grow corn must in fact be able to retain large amounts of water without stagnation. 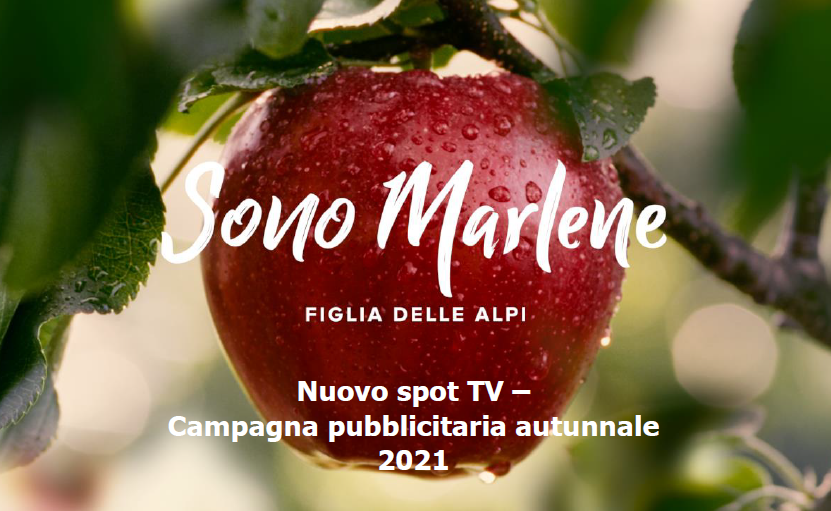 "My father is the mountain, my mother is sunlight," explains the voice in the commercial that will be shown at the Biennale del Cinema in Venice until September 11th. And it is with the story of a 'red carpet apple' that the brand bursts into the scene after the great campaign for its 25th anniversary of 2020-2021. "Our apples deserve to be in Venice because there is a lot to tell." 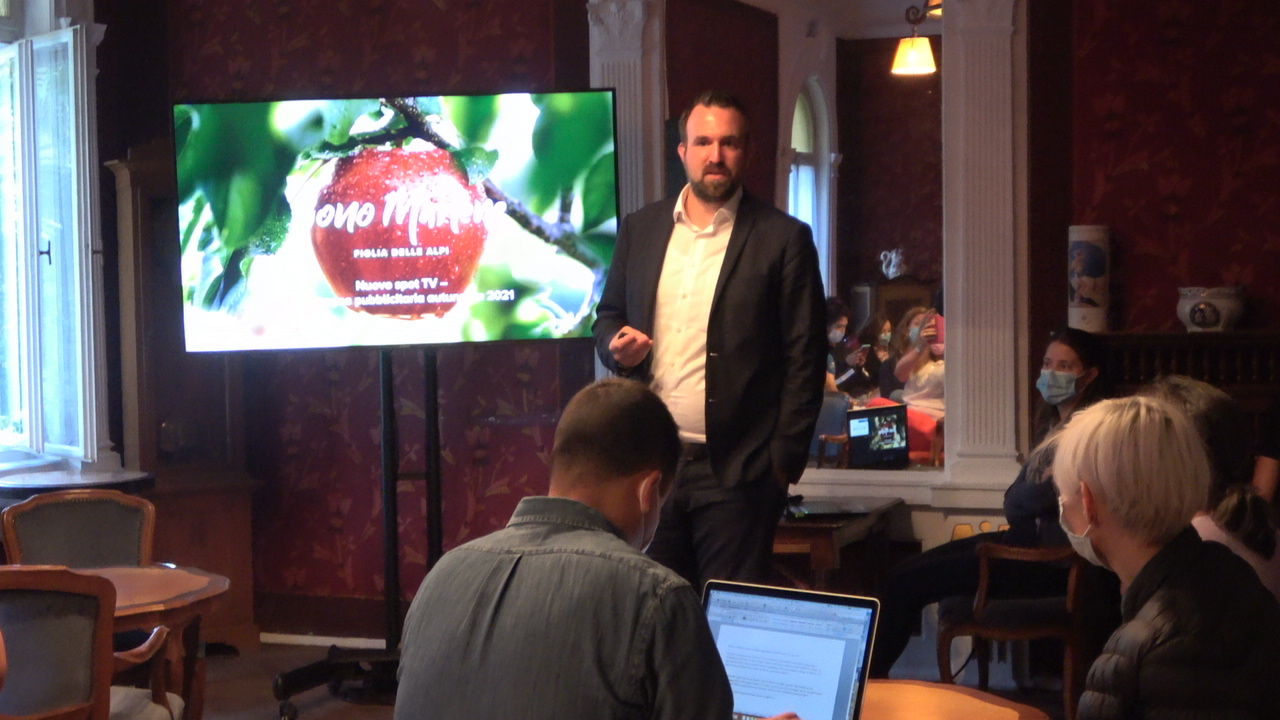 A three-day press trip organized by Fruitecom enabled fresh produce journalists, travel magazine reporters and female magazine editors to get to know the environment that has given birth to a brand that is now well-known in 25 countries. 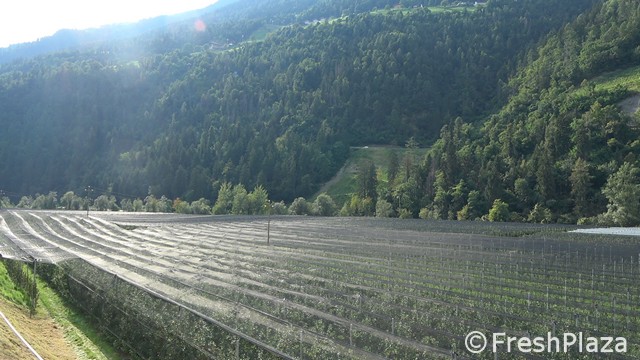 "In a context that is still very much affected by the Covid emergency, Consortio Vog managed to achieve a successful year," reports Klaus Hölzl, sales manager of the consortium which gathers 4700 producers part of 12 cooperatives. Covid has had an effect not only on our health, but also on transport and raw materials. As the 2021 harvesting campaign begins, operators report higher energy, logistic and packaging costs, especially when it comes to transport overseas (€0.60/kg, +50%) and road transport in Europe (+20%). 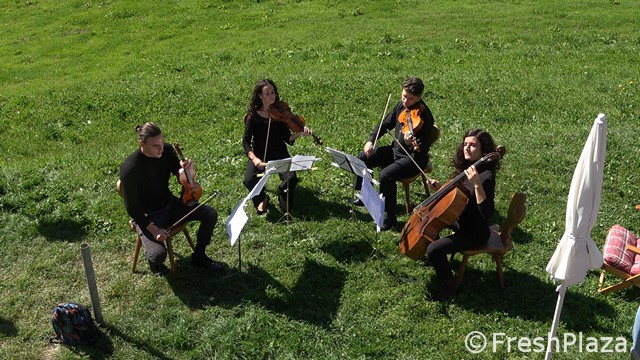 The press trip and the commercial tell the story of the four seasons, accompanied by a string quartet performing Vivaldi and by a time lapse video that required 365 days to make to explain everything that happens within the Marlene world. In addition, a contest involved 3,000 artists from 65 countries to choose the drawings for the seasonal stickers (see images below). 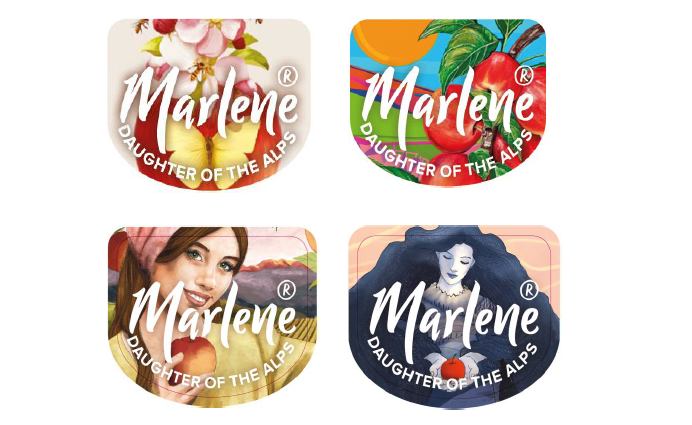 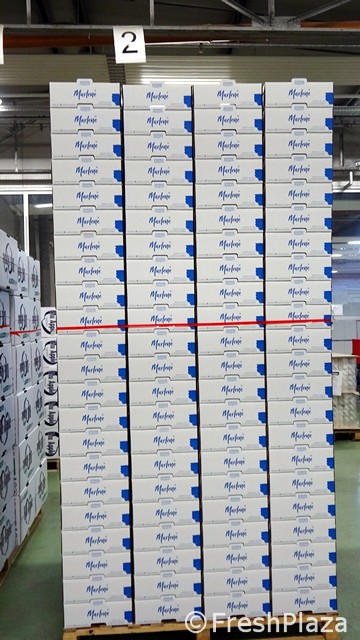 Cooperation is the protagonist of the apple sector in Alto Adige. Innovation, in addition to answering to the dynamics of a changing market ("we want to increase the consumption of this healthy and tasty product," says Pardatscher), also helps against climate change.

When talking to FreshPlaza, the general director illustrated the "sophisticated structure, developed over the decades by various bodies in Europe," which constantly monitors the climatic situation, starting with the Laimburg Experimental Center (founded in 1975, it is the leading research institute in Alto Adige for agriculture and food quality, with 150 collaborators and 11 laboratories focusing on the entire food production chain, from cultivation to the finished product) and the Südtiroler Beratungsring (Advice Centre for fruit and vine cultivation, the largest private advice organization in the world set up by producers). "Technicians help growers find ideal solutions, from winter pruning to plant protection treatments, to achieve high-quality produce. Then consortium technicians help establish the best harvesting period, considering apples continue ripening after they are harvested." 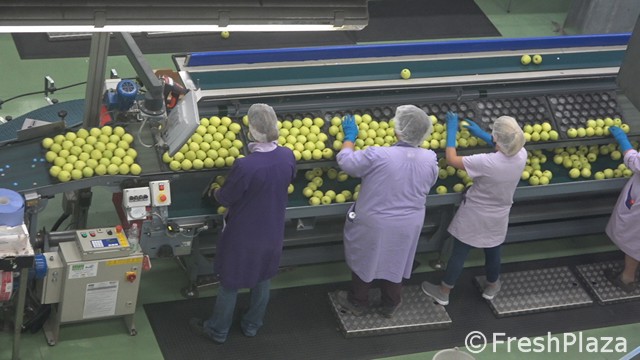 Packaging operations in one of the cooperatives part of the consortium. Click for the full photo report.

"Thanks to these elements, changes are monitored by consultants despite new pathogens such as the brown marmorated stink bug and aphids. Even the 'strongest' sunlight and early ripening due to the higher temperatures are carefully kept into consideration. We would like to tackle these new problems with varietal innovation as well. We have very late or very early varieties and even varieties resistant to high temperatures or scab (caused by fungus Venturia inaequalis which leads fruits to drop): the new varieties introduced this year are Red Pop and Giga".

Biosüdtirol, one of the cooperatives part of Vog, only grows organic produce and can be identified thanks to the green Marlenebio brand. It helps growers "make a hard choice, as there are many problems and the organic market does not grow at the same speed as production does. It is not a question of principle: apples are nice and healthy anyway." 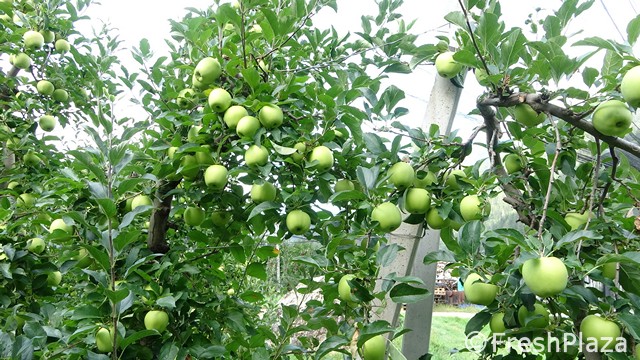 At the end of the three days, marketing manager Hannes Tauber explains that "the brand is our way to communicate, it means making a promise, differentiating ourselves. Climate change requires vision and long-term objectives, as it will be perceived more and more in the future. This is why varietal innovation when it comes to production methods is important to safeguard water resources."

Italy and Spain (where the campaign will begin on September 22nd) have a similar consumption when it comes to both consumer tastes and commercialization. "This is why we have chosen the same communication. Both here and there, the wholesale markets are very important and big retail chains are well organized, unlike other countries - like Germany and Scandinavia - where wholesale markets have a minor role and discount stores and big retail chains are predominant. If we think about Jordan, Morocco, Egypt or Saudi Arabia, markets are even more important while the big distribution chain is not as organized."

For Marlene, the Spanish market has been important for the past twenty years: it was the first country the brand started exporting to and it became the most popular brand over there whereas, in Italy, this record is shared with the cousins from Trento. In Spain, Marlene achieves higher volumes with fewer partners. 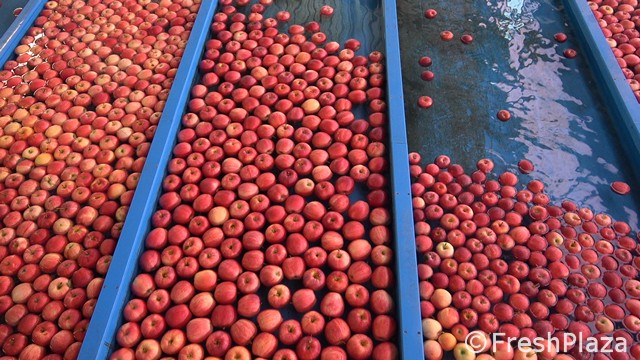 "Not every country is suitable for all varieties: for example, Fuji apples are not very popular in Germany and Braeburn do not sell well in Italy." This is why Vog's objective is to intercept megatrends while dialoging with consumers. "When we plant an apple tree, it will be there for twenty years, we are not talking about strawberries. This is why it is important to intercept long-running trends: sustainability, organic products, online sales to reduce the risk for our growers. In over twenty years, we have tested over 700 varieties of apples with the help of research centers and universities from all over the world whose only purpose is to look for new varieties without genetic modification and with natural grafts. You look fro the 'mother' and 'father', pollinate, plant the seed and wait 6-7 years for the first fruits. In usually takes twenty years to obtain a new valid variety."

Tauber then talks about panel tests and focus groups conducted with Eurofins and Gfk. "To introduce Giga, Red Pop and Cosmic Crispy, we have carried out tests in Italy, Spain, Germany, Sweden, the UK, Singapore and Vietnam." The world of brands also represents the complexities of an increasingly demanding market: there is the producer brand, i.e. Marlene, and at times there are 'umbrella-brands' used to commercialize different cultivars. Some countries also require varieties and codes, as is the case with Scandinavia." 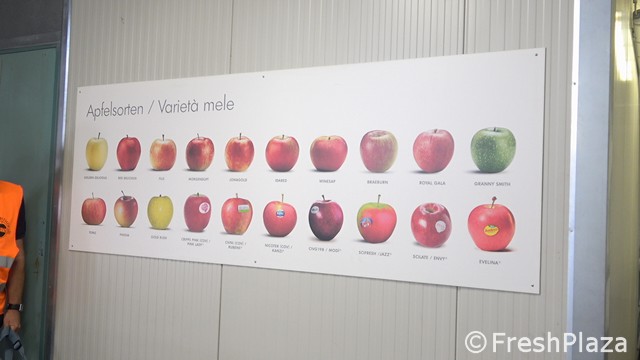 Then there are Club brands that manage patented varieties (Pink Lady, Envy, Kanzi, SweeTango, Cosmic Crisp, a new entry for which Marlene holds the European exclusive and which becomes available in February. Over time, it develops a unique sweet flavor, like Giga) and mixed ones, "by Marlene".

"Planning means Marlene apples are available all year round, this is why the 'four seasons' are the backbone of our new marketing campaign. Pink Lady and Golden are available all year round, Granny Smith is available most of the year, while Envy sells between November and April-May, as then it is the turn of Giga and Red Pop. We also have the new varieties such as SweeTango for summer and fall and Yello for fall and winter (yellow, juicy, crunchy, sweet)."

That wild pome of Malus sieversii that appeared for the first time on the mountains of Tian Shan in Kazakhstan and reached us along the legendary Silk Road has come a long way. Alma Ata, the capital of of the country actually means "Father of Apples." Tauber visited it once: "the apples do not taste good and they are not appealing, but bears seem to like them."