Trade is good, but concerns about supply going forward

The hospitality sector reopened in Scotland back in April after having been closed since Boxing Day, although it was limited in opening times.

“When the opening times were extended from 6pm to 8pm it made a huge difference to demand,” explains Andrew Turriff director at Les Turriff. “We took the decision to go back into full service and put all of our delivery vans back on the road and, as we had predicted, it was full on.”

Between them Andrew and his brother, who runs Turriff Montrose Ltd, cover most of Scotland, supplying independent grocers and the hospitality trade with fresh fruit and vegetables. 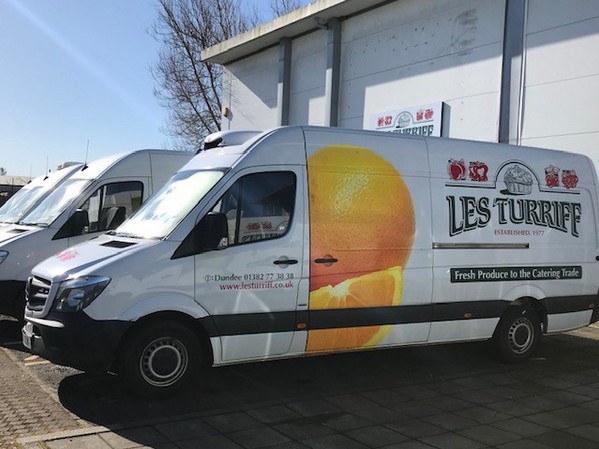 Andrew said that although they were very busy, the ‘hot spots’ were a bit different than normal and there was a lot of demand in the tourist areas, such as St Andrews and Perthshire, but cities like Perth and Dundee were less busy than normal. He put this down to there being fewer students around and people getting away from cities for holidays or short breaks.

Les Turriff were very quick off the mark to start delivering boxes of groceries during the first lock down, at the peak they were delivering 1200 boxes per week, this declined as the lock down eased and since Scotland has been fully open there is less demand, but they still have a core of customers who order a box every week.

The delivery vans don’t come under the HGV sector so there has been no shortage of drivers at the company, also being a smaller company, it has been easier for them to adapt if workers had to isolate for a period of time.

“We source our produce from Glasgow fruit market as well as other parts of the UK, France, Spain and Holland. At the moment we are not seeing too much disruption in supply, the pandemic and hospitality closures have disguised the effects of Brexit until now. The increased paperwork at the border and the HGV driver shortage are starting to show now though. Deliveries are not running as smoothly as they did from within the UK and from Europe. In Scotland we have a more restricted service than down south due to the amount of hours drivers can work.

“The service has deteriorated but not to a major extent yet, we also try source as much local produce as possible. There are concerns about supply for December when there will be more demand and when the regulations change on 1st January 2022, but we would be more worried if we sourced more from abroad.”

Andrew says they will use more UK brokers for imported produce until any problems have been ironed out.