Rhineland-Palatinate: problem-free domestic good supply
The Rhineland-Palatinate Chamber of Agriculture reports that a nice  supply of table potatoes is being met with only moderate demand due to the holiday season. The trade is being supplied with domestic goods without any problems. Producer prices drop to 26 to 28 €/dt at the beginning of the main harvest. Wireworm damage and Erwinia are a recurring issue. Early varieties are still being marketed alongside follow-on varieties. Despite delayed harvest progress, storage should start in about 2 weeks. Consumer prices remain stable. 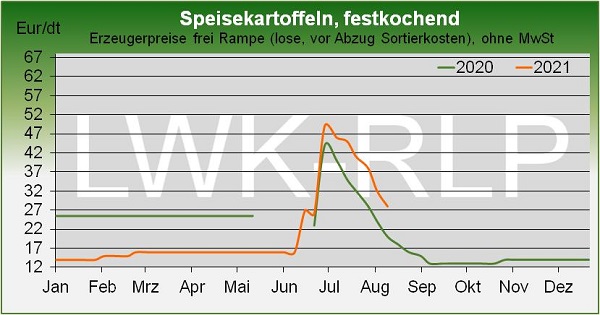 Hesse: Business rather quiet
The month of August continues to be characterized by a quiet potato market, according to the State Office for Agriculture in Hesse. Due to regional rainfall, grubbing operations have been interrupted at times. Overall, however, an extensive supply of attractive goods is available. At the same time, sales are still underdeveloped due to the vacation season. At least larger quantities are now flowing again towards the food service industry. Prices are under pressure and have again been adjusted downward. In some cases, the quotations for individual lots are also undermined. Individual reports suggest that prices of 95.00 EUR/dt (raw product) to 130 EUR/dt (steamed product) are being called for peeled product. 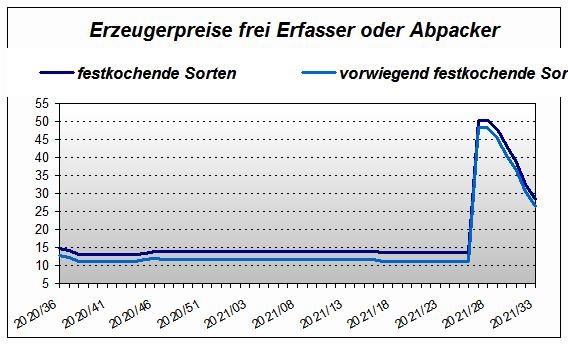 Schleswig-Holstein: Slight upturn in demand
According to the Schleswig-Holstein Chamber of Agriculture, the potato market is experiencing a slight revival on the demand side after the end of the summer vacations. In the federal states where the school vacations are still continuing, however, demand is reported to be lower. The food service industry is also taking potatoes, although not nearly as many as in times without Corona. Supply is sufficient to meet demand. Strong pressure due to too much supply has so far failed to materialize. The late start to the harvest and difficult ripening mean that supply is increasing only slowly. However, even though rain keeps slowing down grubbing operations, there are sufficient potatoes available on the market. National shipments of potatoes are possible. The changeable weather conditions will also mean that grubbing will have to be interrupted during the reporting week due to rainfall. In terms of qualities, concerns are limited, with both bacterial and fungal infections playing a role in wet soils.