As the season for pomegranates kicks off in the Northern Hemisphere, countries like the Netherlands and the UK will welcome the new harvest arriving from Egypt, Israel and Spain, and North America anticipates a good harvest in California. In South Africa, good growing conditions bode well for the upcoming season. Only China has concerns about the season, as they face a drop in prices as some over-eager growers harvest too early. 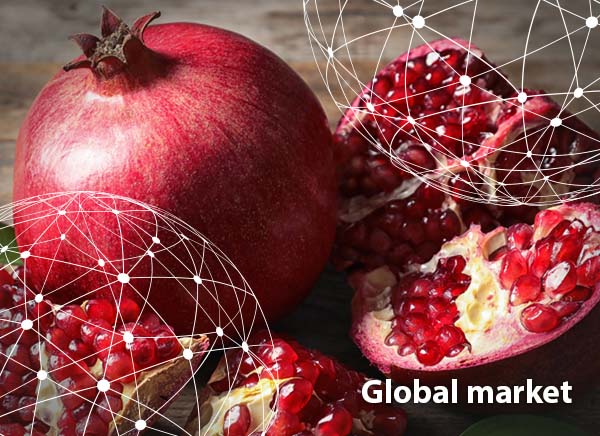 The Netherlands: Overseas pomegranates make way for new arrivals
Currently, the old harvest pomegranates from Peru and Chile are making way on the European market for the new arrivals from Egypt, Israel and Spain. "Traditionally, weeks 30 to 34 have always guaranteed good sales because there was a gap between the seasons. This year, however, Egypt, Spain and Israel are very early, so prices remain at a similar level. Incidentally, the prices are still reasonably good, but you notice that the market is still somewhat reserved, in anticipation of the big wave that is to come," says a Dutch importer.

"We are now really entering the changeover season with the early varieties. Each variety has its own taste and internal and external colour, so you have to be careful what you buy," according to the importer. On the sales side, he is not concerned. "The demand for pomegranates still shows an upward trend. That applies to both the whole pomegranates and the arils. The processing industry has become an important buyer. Covid has only increased the demand for healthy food. Nowadays, all of our customers offer pomegranates, which was quite different a few years ago.”

Demand has been reasonable in the UK as with all new season arrivals, around one week ago prices were circa £8 in London markets for a 3kg carton with 7 to 12 fruits, it has dropped off slightly as more fruit is now available to levels around £6.50-£7.00.

Growers are also developing new varieties, for instance the BIGFUL variety out of the North East of Spain which crops later in the season around October, and its characteristics are full red skin colour, larger sizes, with sweet juice and ruby coloured arils

There is more interest each year in packed arils for the catering and snacking sector, with more countries processing fruit at source, this has also assisted the growth of the pomegranate juice market, which is becoming more popular for the relevant health benefits.

Spain: Earlier start to harvest and higher yields for Spanish pomegranates
This week, Spain has started with the first early Acco and Smith pomegranate varieties. The harvest is starting a little earlier than usual and the yields are higher than last year, which will bring a bigger production this season. The demand is high at the moment as the markets are rather empty. The first Spanish Acco pomegranates are being sold for around €2 per kilo on the German market. Although there are still pomegranates from India, they are more expensive due to the high logistic costs, with an average price of 2.80 to €3 per kilo.

“It is too early to tell how the upcoming crop will be, but we are hopeful that the wet and cold winter that we experienced bodes well,” says a pomegranate grower in the Western Cape.

There are some pomegranate imports at the moment, mostly kosher pomegranates from Israel for Rosh Hashanah at, a retail buyer says, very high cost. They used to import containers full of pomegranates outside of South Africa’s season but it has become too expensive, one retailer says, while another confirms their imports have remained stable.

Local processors store domestically-produced arils for as long as they can, and are supplemented by industrial grade imported from Israel when necessary.

The South African pomegranate industry has shown strong growth over the past decade.

For domestic market, the price was relatively high start from harvesting. Some farmers harvest the fruit when the ripeness is not enough, in order to win a high price. However, the market's acceptance of these fruits is not good, the unsalable sales are serious, and the prices are falling. Some growers are more anxious to pick the fruits when they see the price drop. This situation has formed a vicious circle, and the current origin and market prices continue to fall. At present, the production price of unified goods is about 3 yuan/500 gram, which is almost the same as the market price. Farmers and fruit merchants are mostly at a loss.

In the next few weeks, more products will enter maturing period. The sweetness, quality, etc. will be greatly improved. It is expected that the market situation and the speed of delivery will improve.

North America: Growers and shippers anticipate solid demand for domestic pomegranates
After finishing up with imported pomegranates from Chile and Argentina, some growers are getting ready for the start of the domestic season.

A company active in the growing and selling of pomegranates is starting with its early varieties of the fruit in the first week of September. “It’s our proprietary varieties--Emek and Aco and these are Israeli varieties proprietary to us. In the past, retailers haven’t had access to these early varieties. We’re seeing a lot of demand for them and that’s why we’re getting these plantings coming into production in the next five years.”

The Emek and Aco aren’t quite as big as the better known Wonderful variety of pomegranates—they will peak on size 30s. However, volume is growing on them. “Overall the crop is similar to last year in that it’s an average-sized crop. Our Wonderful variety will start the first week of October but the early varieties have much bigger numbers due to that acreage coming on.” The Wonderful variety peaks on size 22s which is the preferred premium size by consumers.

In terms of growing regions, the pomegranates are grown in the San Joaquin Valley in California--from Bakersfield to Madera.

And while California has faced a challenging growing season with drought and subsequent water restrictions as well as heat waves, the nature of growing the fruit has a slight advantage. “The Eastern part of the valley is closer to the mountains so there’s more underground water and it’s easier to pump. Most pomegranates is grown on the West side where water is far more of a challenge,” says the supplier. “But pomegranates don’t use a lot of water compared to other tree crops like almonds. That’s helping us. But generally we’re concerned about water. We had a drought eight to nine years ago and we worried then too. But this is far worse.”

The heat has also slowed down external coloring of the fruit.

But meeting this crop will be strong demand that continues to grow. “Every year demand gets better and better. I think it’s a combination of things--the health aspects of pomegranates but also the changing demographics have helped pomegranates.” They note that while the fruit once held most of its appeal to ethnic populations who were familiar with it, that’s changing. “Less than half the population has had pomegranates so the demand potential is great. I don’t see demand tapering off at all,” they said.

All of this means pricing will be up slightly on the fruit this season--by approximately five percent. “I’d attribute that to the expenses around labor. In fact, all of our expenses have gone up.”