Limpopo tomatoes and peppers severely damaged by freeze, then sunburn 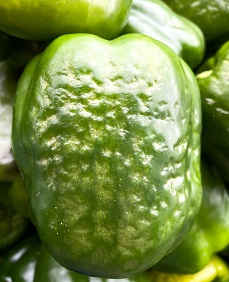 In the week following the civil unrest, a very widespread frost damaged tomatoes across Limpopo Province. The frost was accompanied by a breeze, from Ellisras, Alldays, Waterpoort, all the way to Pontdrift (close to Botswana) and Weipe (close to Zimbabwe), affecting many tomato producers.

Right: cold damage on a pepper

“We had a very large tomato crop on the fields but on Friday morning 23 July the freeze hit us hard,” recounts Thinus Venter of Janlouis Boerdery in Waterpoort, Limpopo. “The cells burst in the leaves and in the top fruit but the big problem now is, with the foliage gone we’re getting a lot of sunburn damage. We’ll still probably be able to harvest around 50%. We’ve lost about 20% due to frost and thereafter 30% to sunburn.”

Pepper plants three weeks on: after the leaves were frozen, remaining fruit have been burned by the sun (photos supplied by Thinus Venter) 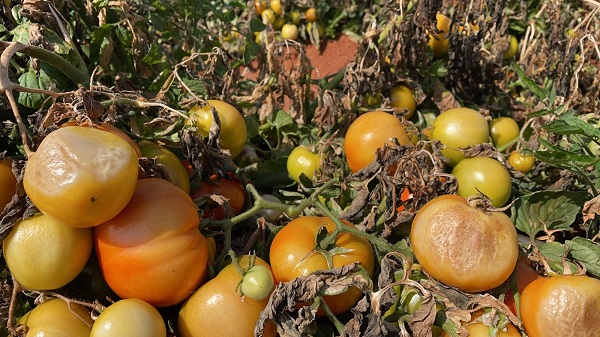 Sunburned tomatoes on plants weakened by frost and loss of foliage

On peppers Thinus reckons they lost 60% because of the frost and then another 35% to the sun. “Before you can even go in to harvest the peppers they’ve already been burned, they burn very easily where a tomato is still a bit more resilient to sunburn.”

He adds that tomato prices on the Johannesburg market fell by 70% because of the civil unrest in KwaZulu-Natal and Gauteng. Tomato prices had already fallen when buyers were wary of visiting the fresh produce markets in Gauteng, concerned about the safety of their trucks. 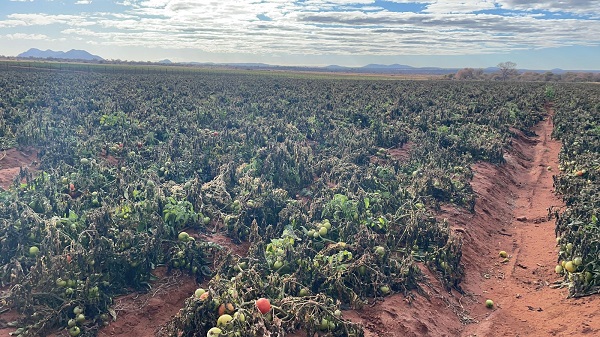 Tomato market under pressure
“Many people think that the frost will have immediately reduced tomato volumes on the market but that’s a myth,” explains Jan Potgieter of GROW market agents on the Johannesburg market.

“The effect of the frost only becomes visible two to four weeks later. Producers will still send supply to the market over a period. It’s been fairly hot in Limpopo over the past two weeks, so fruit has been colouring fast. My prediction is there’s a fair amount still to come, with smaller sizes towards the end of the month. September and October are traditionally very strong tomato months with strong prices.”

Warm weather is bringing larger volumes of tomatoes, but demand isn’t very strong during the middle of the month. Prices are R5 (0.29 euro) to R7 (0.40 euro) per kilogram at the moment. “My feeling is it could drop even lower, but I wouldn’t be surprised if we see a change towards the end of August regarding volumes and then prices should pick up.” 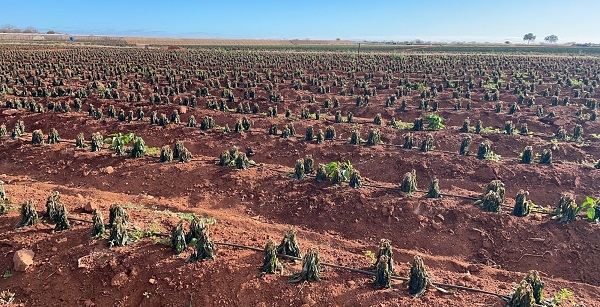 Innovative fresh produce industry rebounds after civil unrest
“We can feel the economy has been hurt. The terrible looting in KwaZulu-Natal has had a negative effect, there were no buyers for a few days, everyone was very uncertain. Thereafter fresh produce channels re-opened because people have to eat. It was perhaps not always the usual channels and our sales weren’t bad. We weren’t as affected as the markets in KwaZulu-Natal.”

“People are innovative, especially in our industry. People have to eat, so if the one channel closes it’s like closing off water in one place – water always finds a way to keep running.”

He adds that lockdown regulations and concomitant restaurant closures have had a negative effect on the market for medium-plus and large tomatoes.

“There are many factors because of which tomato prices aren’t what they should be but I expect towards the end of the month prices will strengthen until the new tomato season starts.”