The table grape campaign is underway in Murcia, the fruit's main producing area in Spain, where the harvest kicked off in late June. Reports say that there is good quality fruit and less pressure from the Egyptian supply at the end of the season, while consumption keeps growing year after year.

"We started harvesting our earliest red grapes on June 24. These are grown under protective covers to protect them from the rains and possible adverse weather conditions, and this results in the campaign kicking off slightly earlier, as the temperatures are kept more stable," says David Franco, commercial director of Grupo Paloma. 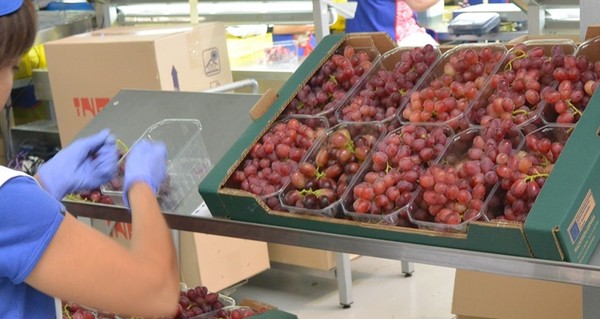 The Murcian company has 300 hectares devoted to the production of table grapes. “In 2016, 2017 and 2018 we made considerable investments in varietal renewal, allowing us to obtain big productions. We hope that yields will continue to grow in the next 3 years and that we will reach interesting production levels with leading varieties”, he says.

According to Grupo Paloma's commercial director, "so far this year the harvest's quality has been very good, with the exception of some of the more traditional varieties. The optimal development of the crops is allowing the fruit to have a long shelf life."

In commercial terms, “the Egyptian season is not having the same influence as last year. There are no large volumes in the markets putting pressure and slowing down the sale of our fruit, as was the case in the previous season, which indicates that there has been a more normal transition between the Spanish and Egyptian seasons,” says David Franco.

“Egypt has its own harvest schedule and commercial window, although in recent years it has developed some late varieties that clash with those at the start of our season. Perhaps four or five years ago it was different, but now it is increasingly clear that it is very difficult for Egypt to compete with Spain in July in terms of quality, logistics and service. By that time, it is already too hot in the African country,” he says.

Although Spain competes directly with Italian grapes, and later, in August, also with Greek white grapes, David Franco says that the markets are increasingly absorbing the supply thanks to the rising consumption of table grapes, driven by the interesting varietal improvements achieved in recent years.

“The spectacular varietal renewal in Murcia has not only made it possible to extend the campaign until November, but it is also helping consumption grow in Europe and beyond. Still, the main market will continue to be the European continent, as sales to more distant destinations are still marked by greater uncertainties due to the pandemic. These uncertainties have to do with both the continuity of the programs and the freight rates.”