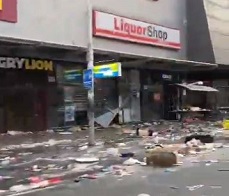 Chaos continues in parts of KwaZulu-Natal and Gauteng, the port of Durban is not operational and the rail service running citrus from upcountry has been suspended by Transnet Freight Rail.

Right: Durban today, where looting reportedly continues and the losses to businesses are reckoned to run into the billions

The N3 highway has been closed from the south of Johannesburg all the way to KwaZulu-Natal.

Entire warehouses have been emptied and destroyed in KwaZulu-Natal. Reports of KZN police running out of tear gas and bullets are doing the rounds.

The army is now involved in supporting the overwhelmed South African Police Service, but they are not gaining the upper hand. The leadership of the police has been lowkey thus far, with a pedestrian security cluster briefing by cabinet ministers this morning claiming that they would not let "a mockery be made" of South Africa's democracy and reminding South Africans to wash their hands.

Parliament is in recess and has not yet reconvened to discuss the crisis.

Nationwide the death toll stands at 45, over 700 arrested. The government security cluster says they are monitoring social media for instigation.

Terrifying destruction
"It was terrifying to see the destruction and the despair of communities who feel completely abandoned by security services," John Steenhuisen, leader of the official opposition who flew into KwaZulu-Natal this morning, told the media. "Something needs to be done to get the situation under control. I have not come across a single member of the SANDF [the army] or the SAPS today."

FreshPlaza has spoken to a number of residents in Pietermaritzburg, Durban, Port Shepstone and Amanzimtoti who are defending their own neighbourhoods with no protection from the police as crowds attempt to enter neighbourhoods. The primary objective seems to be shopping centres and trucks that are looted. 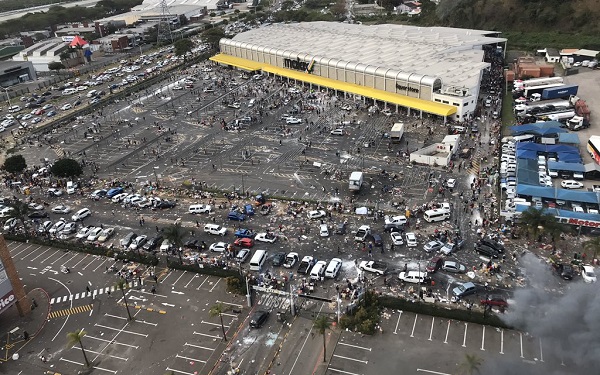 A looted warehouse in Durban from the air, as witnessed this morning by eNCA reporter Dasen Thathiah (source: Twitter)

Residents are very fearful. "Residents have lost all hope that the police can protect them," notes Haniff Hoosen of the Democratic Alliance in Durban.

"There's going to be a food security problem developing shortly. Bakeries have been burned down, shops have had all of their supplies stolen," Steenhuisen continued. Many fuel service stations are closed, with long queues waiting to refuel. Pharmacies have been cleared out, leading to fears of medicine shortages.

Steenhuisen referred to a haphazard approach from the authorities to contain the chaos as well as a lack of communication. 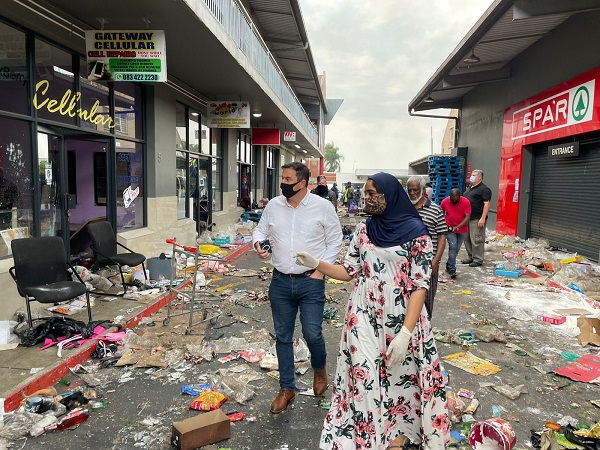 John Steenhuisen of the Democratic Alliance, the country's official opposition, visiting the devastation in Durban, KwaZulu-Natal, today. He exhorted other political leaders and police leadership to do the same (source Twitter Roman Cabanac)

"We're at a loss for words"
Fruit exporters note that their clients are worried about their ability to supply fruit, which increases the possibility of buyers lessening their exposure to South Africa in favour of more stable countries of origin in South America and Australia.

"Every order that a South African producer loses, is an order that might never be regained," says an executive at one of South Africa's largest fruit exporters. "Our success relies on our ability to deliver product reliably, otherwise they'll turn to other supply regions."

“It’s truly terrible, we’re at a loss for words,” says a Limpopo citrus exporter. “We can’t get our fruit safely at the harbour which is, in any case, not operational.”

In Limpopo and Mpumalanga, on many farms the citrus harvest has been temporarily stopped, unless there’s storage on the farm, and packhouses have stopped packing.

“It’s a big mess! We’ve notified our clients but they don’t always understand all of the circumstances. There’s huge uncertainty but hopefully we’ll be able to service our programmes. Harvesting and packing in the north is going to drastically decrease for the moment.”

Fortunately full Northern markets
There is a silver lining to the situation. “There’s still a lot of fruit in the markets in the Northern Hemisphere so no-one’s desperate for fruit yet,” a citrus exporter says.

The Durban municipal fresh market closed yesterday while Gauteng markets have also been affected by the unrest, with few buyers braving the journey. 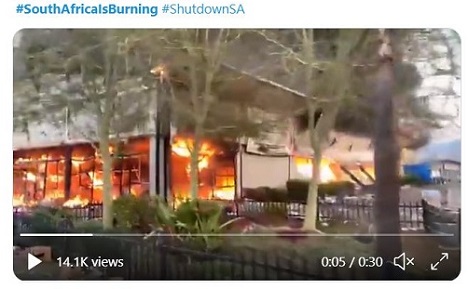 Images of the destruction of infrastructure in Durban, Pietermaritzburg and parts of Johannesburg and the Rand abound on social media

Producers are wary of sending their trucks to and through the Johannesburg metropolitan area which is affecting deliveries of fresh produce.

Johannesburg lies between Limpopo and Mpumalanga and the rest of the country, so those citrus growers can't easily switch to sending out from Port Elizabeth, Ngqura or Cape Town.

In the Western Cape a significant cold front accompanied by heavy rainfall has been disrupting the citrus harvest.