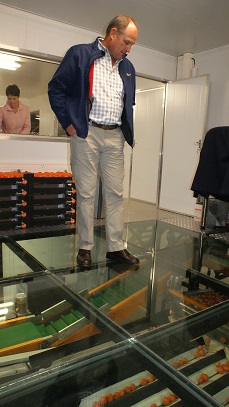 On the banks of the Olifants River, in Limpopo’s Loskop Valley, it’s been a good season for citrus.

“The internal quality and the colour of the fruit are super this year,” remarks Charles Rossouw, owner of Roslé Group, of their Nadorcott crop which is packed into the ClemenGold brand, of which he was an early adapter a few years ago.

As a former provincial rugby player he believes in the value of a game plan, and he likes the ANB Group’s ClemenGold game plan: instead of producers competing against each other, their cooperative effort consolidates a critical mass of one cultivar that can sustain months-long programmes in the Northern and Southern hemispheres.

Part of the game plan, he explains, is to continuously plough back into the brand. In South Africa the brand is exclusive to high-end retailer Woolworths, which is the same model followed in its retailer agreements in the Northern Hemisphere. 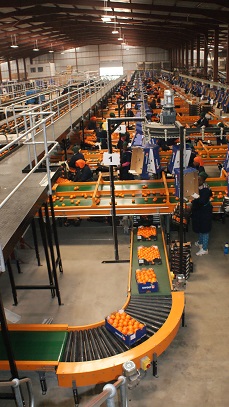 Today Roslé is a prominent Nadorcott producer on the ClemenGold platform. Their Nadorcott expansion continued until last year and when all of the orchards have matured, it will comprise roughly 40% of their citrus volumes.

At the moment their citrus portfolio is still quartered between soft citrus, lemons (seedless as well), navels and Valencias.

Between 92% and 95% of their citrus is exported to supply supermarket programmes in the Northern Hemisphere.

Valencias: market fuller than last year
The Senwes Valencia harvest has already started (late navels will be harvested in three to four weeks) and it’s likewise been a very good quality year, he notes. Smaller sizing in the Valencia production of South Africa is putting pressure on marketability, but that’s not the case here.

“We have no problems with sizing. Yes, it’s definitely a size smaller than usual but it’s still in a totally marketable range: we’re seeing roughly 30% 88s and smaller, 30% 72s and 30% larger than 72s.”

“The orange market is still full, unlike last year. Europe has had a large crop and supply is moving slowly. Egypt still has fruit in the market but from here onward it should be emptying out. I don’t think there’s the pull of last year, and prices are definitely under pressure but it’s not a hopeless situation if you place the right product in the right market.”

He adds that the markets don’t keep him awake at night. What keeps him up at night are exigencies like a strike at the harbour, but that has hopefully just been averted with a wage settlement between Transnet and the unions.

South Africa is, in fact, a very stable country
On the whole, Charles is unreservedly upbeat about South Africa: he points to the country's political stability (the ANC will probably be in power for the foreseeable future) and to the impossibility of getting the two-thirds majority to change the country's constitution.

The country is undeniably in a much better space than during late-apartheid 1980s South Africa, while currently the tide is rapidly turning against corrupt former president Jacob Zuma.

South Africa is a commodity-based economy and the Rand could well trade at stronger levels in coming years, he says. International analysts agree with this optimistic outlook on the country's internal affairs which, in any case, only determine 24 to 25% of the Rand's strength, he points out.

"A strong Rand will have a large impact on returns. Over the past decade the Rand had been weak against the US Dollar, which acted as a buffer in the absence of any government subsidies, and I worry that exchange rate margins rather than actual productivity have driven expansion in the citrus industry. If you can be profitable under a strong Rand, then you are running a sustainable business."

Table grapes made way for blueberries
In 2016 they replaced all of their table grapes with blueberries; their blueberry harvest started two weeks ago and it can only be better than last year’s crop which was damaged by a severe cold snap, the same that also hurt the area’s navels. 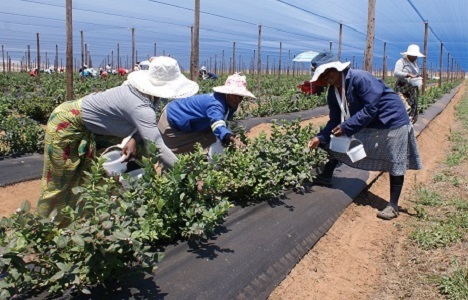 “We’re expecting a good berry market, as the Northern Hemisphere enters its late season. South African blueberry volumes are growing and expanding our footprint in the market, although the country’s not at this stage a significant player.”

The latest arrow to their bow is passion fruit, of which an initial 140 hectares of the South African Silesia cultivar have been established in Groblersdal and in White River, Mpumalanga.

“A farm plays an enormous role in people’s lives,” Charles says, and it’s probably nowhere more evident than in South Africa: Roslé provides pre-primary and primary school education for their employees of whom 58% are women, along with health screening and a vegetable garden for their permanent staff.

“We believe in the value of life.”