Data made public at this year's Interpera, the international pear congress, held in a virtual format this time, revealed that Europe expects a significant decline in its pear production in the 2021 season. Widespread frosts across Europe have led to global declines, with France predicting a 50% drop and Belgium and the Netherlands a 30% one. 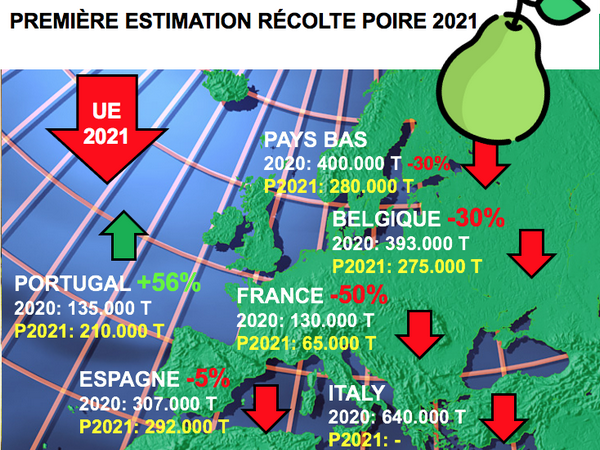 Although Italy (the largest producer) has not yet calculated what its decline will be, it has already confirmed frost damage in the fields and significant physiological fruit drop, so it expects a reduction in the final volume.

Spain also foresees a slight 5% drop due to the frosts recorded in early April, which mostly affected the earliest pears, such as the Limonera or Ercollini. The impact on late summer varieties such as the Conference or Blanquilla will largely depend on the area.

The pear acreage in Spain has been slightly reduced and only the Conference, Williams and Ercollini varieties have more hectares. Pears are reaching good Brix levels and normal sizes.

Northern Europe foresees a later start to the season, while Spain and Italy believe that, despite a 3-4 day delay, the expected harvest schedule could be that of a normal year. In fact, depending on the temperatures recorded from now on, there could be even an earlier start.

The members of the congress marketing board said that this estimated drop in the production will require a good planning of the campaign to avoid leaving markets and customers unsupplied.