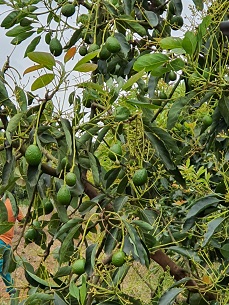 South Africa’s avocado season has been rather disappointing, says the chairperson of the South Africa Avocado Growers Association, Clive Garrett.

“Volumes are lower than expected and the current crop is now estimated at 16million 4kg equivalent export cartons.”

The lower than expected crop is ascribed to three factors, he continues.

“It is an off year, the cold in September affected the flowering and therefore there was a lower fruit set and the excessive rains in January and February also played a role.”

On the European market South African avocado exports had a tough time given Peru’s big volumes.

There is a lot of wind damage on the avocados they’re seeing on the local market, notes Ricardo Kotze, Botha & Roodt avocado specialist at the Johannesburg market, with some hail damage on Pinkertons last season. (The hail of beginning June around Nelspruit is expected to affect next year’s crop as flowers were knocked off.)

Domestic demand for small counts strongest ever
At the Johannesburg market, avocado volumes are at least 50% lower than last year, Ricardo says, and the fruit is smaller, despite initial expectations of larger size due to good summer rainfall.

“Fortunately there is a huge demand for one kilogram packets, and demand for small counts is better than it has ever been,” Ricardo remarks. “This year there’s a strong market for counts 22, 24, 26, up to 28. In the past counts 16 and 18 were very, very popular but this year we’re seeing producers packing 10s and 12s for loose sales and then lots of one kilogram bags.”

He points out that the packaging cost and labour requirements on one kilogram bags are lower than on packing cartons; there are avocado farmers who have had to reduce their packhouse staff because of Covid.

Add to that challenges at the ports and shipping disruptions (most avocados are exported from Cape Town), and there are farmers who aren’t packing for exports nor for the local markets either, which is a pity, he says.

“We’re supposed to be sitting on 30,000-plus cartons here at the market. At the moment we’re running at between 10,000 and 20,000 cartons. I expect that the volumes will start increasing within the coming weeks as KwaZulu-Natal’s crop starts coming in. I understand their crop is looking very good.”

He notes that KwaZulu-Natal producers are keeping a close eye on the export market to determine when to start packing; the region is traditionally a late area that can let its fruit hang. Given the state of the export market currently, they might decide to do that, which in turn derives the local market of fruit.

The current domestic price of R16.17 (0.95 euro) per kilogram is well above the price of the past three seasons.