Seeing the potential of drones in reshaping agriculture, Japanese farmers now expect the first mass-produced, lightweight farm robot XAG R150 to reap a higher yield with quality fruits. As Japan's population is aging fast, XAG has introduced its R150 unmanned ground vehicle, open for sale in June, to help farmers relieve their physical burden. The XAG R150 just made its debut to pollinate an apple orchard of Takayama in a Japanese-first, bringing hope to tackle labor shortage and the decline of bees. 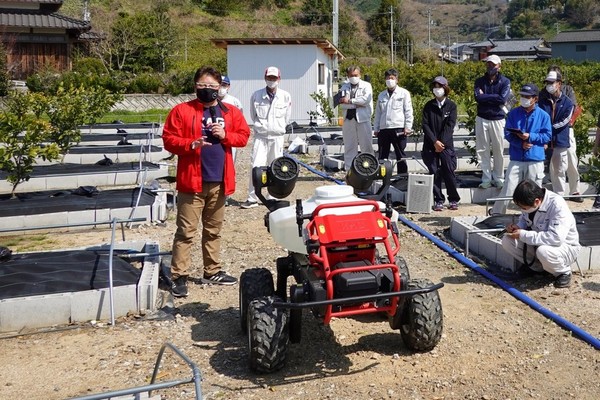 The Ministry of Agriculture, Forestry and Fisheries of Japan formulated the Basic Plan for Food, Agriculture, and Rural Areas in 2020 to achieve smart agriculture for the next 10 years. The government has charted the roadmap of adopting digital technologies, such as robots and artificial intelligence, to drive new growth in its agricultural economy.

In April this year, XAG Japan hosted a demonstration to test the competency of XAG R150 using its on-board JetSprayer system to pollinate apple trees. The field trial was conducted in Village Takayama, Nagano Prefecture of Japan, and watched by experts from Japan Agricultural Cooperatives.

The idea of applying ground robots for fruit tree pollination was a bold attempt to cope with the pollination crisis. According to the estimate of Japanese government, the number of bee swarms in Japan has experienced a 40% reduction over the past nine years. The absence of important insect pollinators could cast a massive fruit yield reduction and cause fatal blow on the annual revenue of fruit farmers.

During the demonstration, the operator poured a special mixed solution of pollen into the liquid tank of XAG R150, which then started to move autonomously and spray liquid pollen on the Sun Fuji apples following the pre-settled route.

As an all-electric, mini-scale autonomous farm robot, the R150 travelled nimbly between three rows of Sun Fuji apples, spraying atomised pollen solution uniformly on every tree from the bottom up. From a distance, the operator could adjust the spray angle and spread width simply through the smartphone app.

Robots and young farmers as new blood
Started from 2016, XAG has set up an oversea subsidiary in Japan to cover a wide range of market that serves the 11st biggest country of agricultural production. XAG Japan has scaled up its agricultural drones to over 28 cities and served more than 10 species of crop varieties. The aim is to help the aging Japanese farmer embrace advanced technologies, while bringing young people back to village to start business in agriculture.

Since 2019, the Japanese government has decided to raise its national export goal of agricultural, forestry and fisheries products and food to $19.28 billion dollars in the year 2025 and $48.21 billion dollars in 2035. These target numbers set a higher demand to speed up the transformation of Japan's agricultural production system.