Cherries: half the supply and higher prices

Agreste, the statistics department of the Ministry of Agriculture, has published a note on the current cherry situation.

“As of June 1st 2021, less than half the cherry harvest is expected. The historic frost in April has had an impact on all production basins, especially in the Rhône Valley. It is expected to be the lowest production in the past 46 years at least, and the lowest yield, except for the year 1977 which had also a similar yield. This drop in production is accompanied by a significant price increase at the beginning of this campaign.”

Production
The cherry production is estimated at 13,600 tons, which is half of a standard year. All production basins have been affected by the April frost, especially the Rhône Valley.

Languedoc-Roussillon region: decrease in production estimated at 40%, with only ¼ of the harvest expected in the Garonne Valley.

Rhône Valley: the Burlat production harvested is much lower. Only a third of the harvest is expected, compared to an average year. 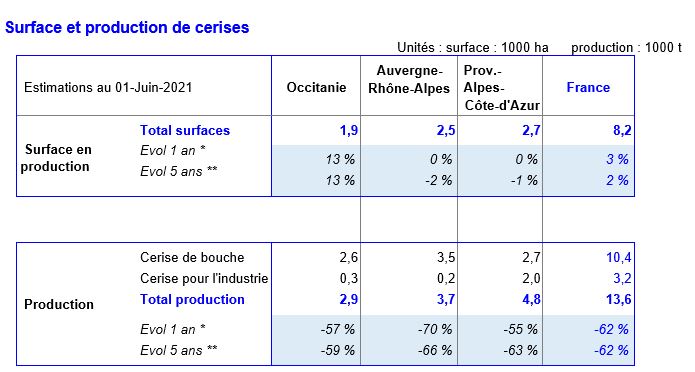 Prices
“In May 2021, cherry prices were higher than the 2016-2020 average (+50%) and also higher than last year (+34%). Marketing is starting in the Roussillon, followed by the southwest and southeast of France. The offer is limited as a result of the frost which affected the early varieties more. The demand was very present at the end of the month, but the offer cannot satisfy it. The quality of the first cherries harvested is variable, which does not make it easy to promote the fruit on the shelves. In May, the volumes from Spain were almost twice the usual volumes, depending on the arrivals at the St Charles market.”

“Over the entire 2020 campaign (from May until July), cherry producer prices were lower than the previous year by 5%, but higher than the 2015-2019 average (+4%). The production calendar is tighter than in 2019. The offer at the very beginning of the campaign is early and limited. The Burlat harvest was cut short in all producing regions, especially in the Roussillon. Prices are high. In June 2020, prices went down by 10% compared to the previous year due to the increase in supply, but they remained higher than the 2015-2019 average (5%).”