A spell of good weather and the reopening of hotels, cafes and restaurants in many European countries has significantly boosted the demand for limes. The supply is currently predominantly coming to Europe from Brazil and Mexico, although the latter arrived later, as there were higher prices to be made on the North American market, where prices have been surprisingly high despite a good supply from both Mexico and overseas. Although the South African market has good prices for limes at the moment, wet weather in the cultivation areas led to a lower quality than usual due to fungal growth. 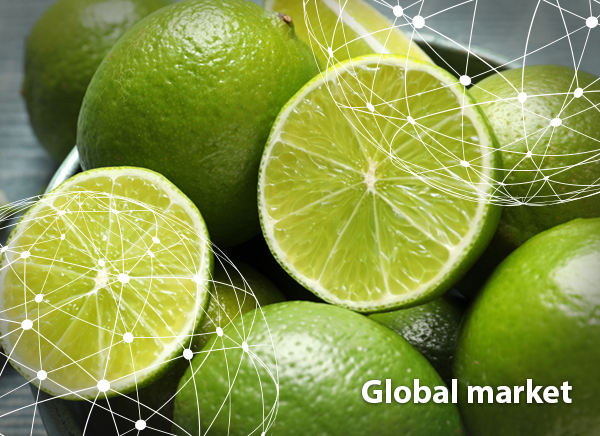 Netherlands: Good demand for limes, but surprise at rising prices
The Europe-wide opening of the catering sector and the fantastic weather are a golden combination for the lime market. "Limes are predominantly finding their way to the hotel and catering industry and everyone wants to go outside again. The demand is therefore very good," says an importer. At the same time, he is very surprised by the rising price level. "Prices have now risen to between 8 and 10 euros. If you look at the export statistics, it has been a long time since Brazil has sent so many containers to Europe. Normally the prices would drop, but in this COVID year more things are happening that are very illogical. Mexico started shipping a fortnight ago, but did not send anything to Europe for a long time because of the higher prices that could be made in the United States.

UK: Prices rise by 50% compared to May as catering industry opens back up
The supply of limes to the EU and UK is currently predominately coming in from Brazil. Over the last month prices have been increasing weekly and are now around 50% higher than at the start of May. The quality and condition of the limes is good, demand has also been good now other sectors of the industry have opened up.

Mexico are starting their new export season to Europe, and the UK should be start seeing better volumes arriving in the coming weeks, then prices should ease back a little as more supply available from both sources, as prices are expected to continue to rise over the next few weeks until Mexican fruit arrives in the market. Some importers also looking at the possibility of small air freight shipments to ensure continuity of supply to their retail programmes

Italy: Hope for return of tourists to boost summer lime sales
After a long period of lower prices, limes are now showing prices of around 2.00 euro/kg at purchase. The main origins are Brazil and Mexico, at the moment, and the product is qualitatively good, although scarce. Importers are worried about the expensive sea freight costs. The month of June is the launching pad for limes," says a wholesaler from northern Italy. "As always happens, the price tends to increase during this period, only to fall again from July-August, when temperatures are generally higher.”

Demand for limes is growing but the prospects for available quantities on the market are stable or declining, according to another northern Italian seller who markets it in the summer, mainly to tourism operators. "The hope is that as the pandemic recedes, more tourists will come to the beaches, mountains and cities of art, and enjoy more bars and restaurants," he says. At wholesale level in the north of Italy, on 8th June 2021, lime was  sold at around €9-10 per crate, and each crate weighs 4.5kg." According to the operator, 90 per cent of the limes that arrive in Italy are landed at the port of Rotterdam, and the price also depends on the quantities available and those expected in the short term. On Sunday, 6th June 2021, at a supermarket, the packaged lime of good quality and Brazilian origin was sold at 5.30 Euro/kg, while the second category lime was sold at 2.89 Euro/kg.

Limes are also grown in Italy. The harvesting calendar runs from late summer to late autumn. Although it is not a well-known and suitable crop for Italian areas, it is possible to obtain fruit suitable for marketing: smooth skin, medium-large sizes, with excellent juice yield and exceptional aroma. Lime cultivation is very susceptible to the main fungal and bacterial diseases of citrus fruits, but there seems to be no lack of satisfaction. The prices of the latest supplies of Italian and organic limes were around 1.00 Euro/kg. This product is mostly destined for the domestic market.

Spain: Reopening of catering and good weather boost lime sales
Spain imports limes from Brazil almost all year round. Normally the volume from Brazil drops in the summer so more limes are imported from Mexico. These enter Europe in mid-May and are sold until mid-January, although this year they arrived late due to the cold temperatures. It has been a difficult year for the lime market in Spain due to the pandemic, making the consumption fall as most of the hospitality sector wasn’t functioning. However, in the last two or three weeks there has been a reactivation of the market with a rise in prices as a result of the gradual opening of restaurants, tourism, the arrival of good weather and the confidence offered by vaccines. In the last two months there has been less availability of containers in Brazil, which means a significant logistical problem. Freight charges increase and it can be difficult to load. The forecast for this summer is much more positive compared to last year. Consumption usually increases considerably in summer and this season, after a difficult year, there is a lot of desire to go out, enjoy and celebrate, and that will definitely encourage the sales of limes.

In South Africa high season for limes runs from January to March, tapering off in autumn. The price is between R20 (1.2 euro) and R25 (1.5 euro) per kilogram on the market. The season has been good except for the rain in the Lowveld which caused fungal disease, the grower says. Three weeks of rain in September and October affected the spring flowers with an unusually long period of overcast weather. “We didn’t have a lot of volumes this season but what we did have, we were able to sell,” he continues.

South Africa imports limes from Eswatini which is in season at the same time as its neighbour (over 121 tonnes of Swazi limes were imported this past March) but it is the imports from Brazil during November that hurt: trade figures show 41.3 tonnes were imported during November and 50 tonnes the month before – but crucially, restaurants were still closed, and there was very little demand for the limes which were sent to the municipal markets where they dragged down the price, right as local limes were picking up. Some of these imported Brazilian limes had to be destroyed, it is claimed.

North America: Demand could strengthen increasing lime supplies
“The supplies of limes have been pretty high this year and we’re starting to see a slightly higher increase in fruit--it’s about a 25-30 percent more,” says a Texan distributor. He notes that supply increases such as this are fairly standard at this time of year.

The fruit is also maintaining its quality. But generally in the industry, at the end of June and into July, some quality issues can emerge such as seeing more lighter colored fruit and burn marks on the tips. “When it does rain, the elevated temperatures and the heat can potentially cause exaggerated burn marks on the fruit,” he continues.

“Sizing is still dominated by small fruit. The number one size coming in right now is the 230 count. Then there are even amounts of 200 and 250 counts coming in and every size larger than this, you’re going to see less and less of it.”

While Mexico is the dominating country supplying limes, he notes that offshore supplies are still coming in from countries such as Guatemala, the Dominican Republic and Colombia. Generally though this fruit heads to Eastern parts of the U. S. and Canada.

That said, offshore fruit is likely to wind down soon in supplies. “The prices of Mexican fruit get so far down that the offshore fruit can’t compete,” according to the trader. “When Mexican fruit is $20-$30 and up, they can compete, even with elevated freight rates. But if the market continues to come down like it normally does to summer pricing of high single digits to low teens, offshore fruit will fade away.

Currently, he says pricing doesn’t reflect the high supplies. “Pricing has been at a higher level than normal considering the supply in hand. The only thing that’s changed is the market reacted in an aggressive way to where we’re basically at a summer price point,” he says, noting pricing is in the teens currently. Demand is also slightly weaker compared to how it’s been recently. The market had seen elevated demand lasting months recently, which could be what kept that pricing higher than what an increased supply market would normally dictate.

That said, foodservice continuing to reopen across the country is helping demand. “I think that’s why we’re going to be in a better position overall once the next few months get going,” the distributor concludes. “I’m not sure if it will help price points. But it’s another avenue for movement.”