Association of Avocado Producers and Packers of Mexico (APEAM)

Mexico is one of the main avocado exporters worldwide. Currently, the country exports avocado to 34 countries. The United States is the main destination, followed by Canada, Japan, France, El Salvador, Spain, Honduras, Holland, China, and South Korea, among other markets.

After receiving the National Export Award from the Ministry of Economy, the Association of Producers and Packers of Avocado of Mexico (APEAM) managed to break the one million tons of shipments barrier to the United States. 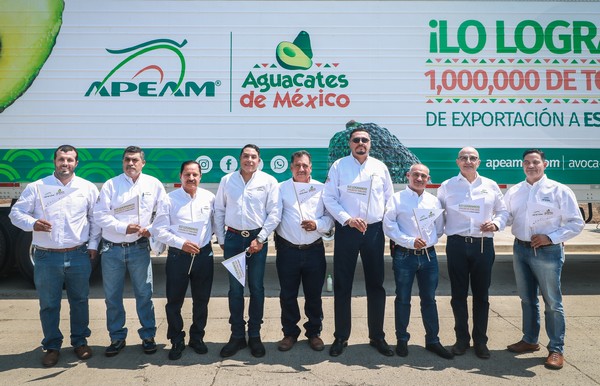 "We were able to surpass exporting one million tons to the United States during the 2021 season because producers are constantly striving to plant and harvest a clean high-quality avocado," said Gabriel Villaseñor Zurita, the president of the association.

Sustained growth
Through various dissemination campaigns, APEAM has promoted the fruit in other countries, always under the Avocados From Mexico brand, making the avocado an international icon. As a result, the avocado has increased its global market positioning, season after season.

The country went from exporting 41,118 tons of avocado in 1999, to 962,000 tons in the 2019/2020 season. Exporting a quality product allowed exports to grow by 5 percent during the last two seasons and avocado consumption in the United States to go from 500 grams to 3.5 kilograms.

"The growth of the avocado export industry has had an impact on the decrease in migration. It is estimated that approximately one hundred thousand families have found a well-paid source in the sector and have chosen to stay in their homeland," stated Gabriel Villaseñor Zurita, the president of APEAM.