The latest storms affected some 3,000 hectares of crops in the provinces of Valencia and Castellon

According to La Unio de Llauradors' first emergency assessment, yesterday's storms affected some 3,000 hectares of crops in the provinces of Valencia and Castellon, and initial losses could amount to nearly 2 million euro.

The storms arrived unexpectedly. The AEMET did not foresee any type of precipitation and no yellow alert had been declared. The front moved from west to east through the central part of the Valencian Community and was accompanied by hail and lots of water and lightning. 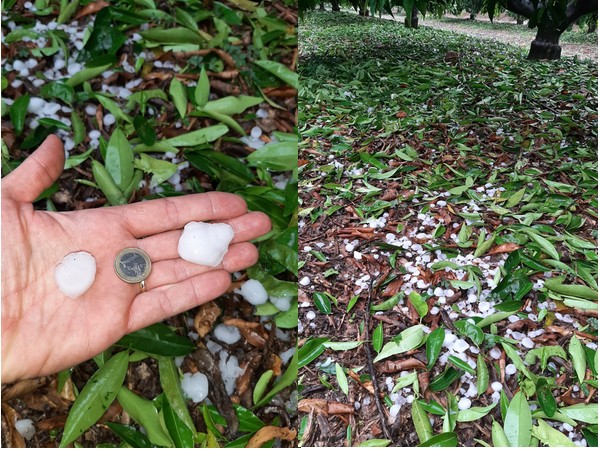 The area between La Safor and Ribera Baixa was the second most affected region, with some 1,200 hectares affected (many of which are beach areas). The damage, however, wasn't so high because the hail was accompanied by a lot of water. However, the most exposed plots will have damage of some importance. The most affected municipalities are Xeraco, Tavernes de Valldigna, and Cullera. The storm affected orange, persimmon, pumpkin, melon, tomato, pepper, and aubergine crops.

The region of Utiel-Requena, mainly 200 hectares in Requena, was also affected by the storm. The damage will be minor and the most affected crops are grape, almond, and olive crops.

The Alto Palancia area of Castellón was also affected. The storm affected nearly 500 hectares in this area; fortunately, the hail was mixed with a lot of water.

La Unio de Llauradors will demand urgent measures to help the affected producers, such as the granting of aid, free distribution of fungicides, the reduction of the IRPF module, the remission of the IBI of the cultivated plots and buildings in them, a reduction in Social Security payments for a year, the establishment of subsidized interest loans, as well as a series of actions and aid for the affected marketing cooperatives.