The Colruyt Group takes an indepth look at potatoes

It's easy to see a bruise on a person. Not so, on a potato. The bruises are under the product's skin and so not easily detected during processing. Science, however, has found a solution that gives the Belgian Colruyt Group a peek under potatoes' skins.

The Colruyt Group has a 0% tolerance for bruising. But, the current detection methods allow potatoes to slip through the quality net's gaps. "The Colruyt Group is running a potato project. We're working directly with 17 growers with whom we make agreements about varieties and prices. The packers are also involved," begins Rony Neufkens, head of the Colruyt Group's fruit and vegetable purchasing department. 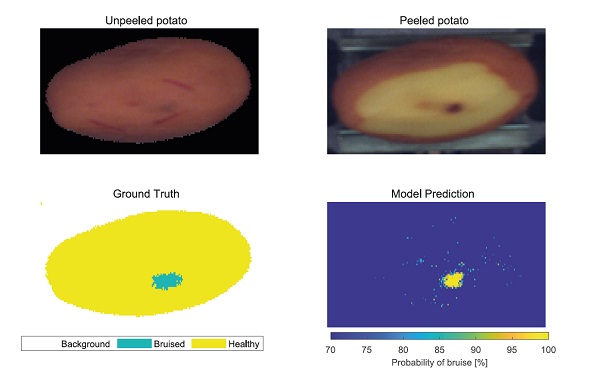 "Guaranteeing a constant potato quality is a vital part of the project. Bruising is a quality issue we'd like to reduce. After all, when customers peel potatoes, a bruise affects their perception of the product's quality. It's also about sustainability. You want to be able to consume as much of what you buy. So that you have to throw less away. Ultimately, that also results in less unnecessary packaging and transport, and so on."

Currently, checks are done at various steps along the chain. The packer checks the bulk product for bruising. Colruyt Group does an extra quality inspection of the finished product. That's when they receive the goods. "We take a sample from each batch. Our quality inspector opens the bag and cuts open several potatoes," Rony explains.

"If there's bruising, we reject the batch. Those potatoes are returned. In principle, we apply a 0% tolerance. However, bruising is more common in dry, warm growing seasons. We then do additional quality checks. But we sometimes also have to be a little more tolerant. Then we consider how bad the bruise is."

The Colruyt Group has a Research, Development, and Innovation Technics department. It's trying to find ways to improve bruising quality controls. "The Colruyt Group and KU Leuven [a Belgian university] developed a test. They wanted to see if hyperspectral image processing can solve the problem," says Team Leader Wannes Voorend. 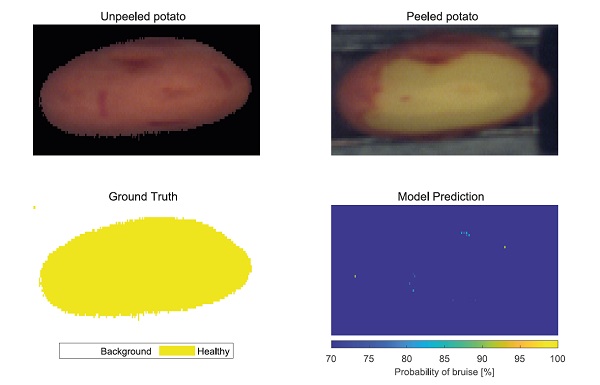 "It's a promising technique that allows you to do several things. Like see several mm into the potato." The university and the Colruyt Group successfully tested this on a larger scale. For the test, they deliberately 'abused' several Challenger and Fontane potatoes. These varieties are relevant to the Colruyt Group. They used a hyperspectral camera to scan them while they were lying on a conveyor belt.

"We used that data to train a mathematical model. With that, we could eventually reach a 12cm/second scanning speed. That comes very close to standard manual scanning times. Those can reach up to 18cm/second. For the Challenger variety, we were able to detect 85% of the bruised potatoes; for Fontane, it was 95%," says Niels Wouters, a KU Leuven researcher. He thinks the detection process can be improved.

"There are all kinds of possibilities to improve both speed and accuracy. By scanning more potatoes, you improve the developed mathematical models. That also makes the system more accurate. You can further optimize it. You can use data cleverly. You can, say, design a system that only considers the relevant colors of the spectrum. Technological developments have also recently progressed. Cameras are better, faster, and more sensitive." 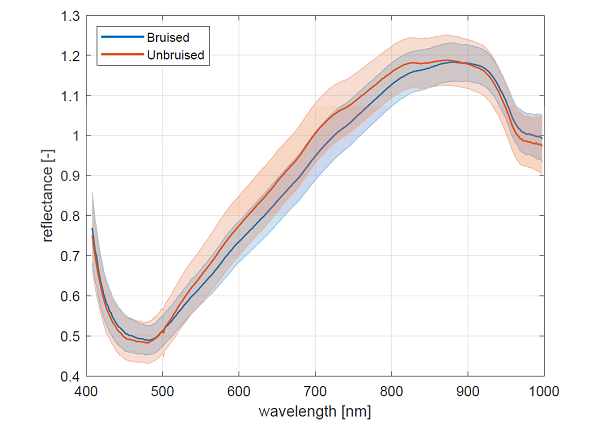 Best detection results are from wavelengths between 600 and 800 nm

The technology and knowledge required are progressing rapidly too. The university, therefore, thinks it's entirely possible to eventually integrate hyperspectral imaging into existing sorting lines. These must include optical scanners. Further improvement is needed too. The Colruyt Group doesn't only want to be able to detect but also predict bruising. After all, when cells are 'injured', they don't bruise right away. It takes a few days. The technology must sort out these potatoes too.

"Our department's been investigating the possibilities of hyperspectral imaging for a long time," adds Bart De Ketelaere. He's KU Leuven's Mechatronica, Biostatistics, and Sensors Department's research manager. "We regularly collaborate with other parties to be able to take the step towards commercialization."

"However, given the costs and risks, industry-relevant research results aren't easily picked up and developed. It's not the university's task to commercialize these things. Market participants are needed to implement them. We hope this research project with the Colruyt Group has narrowed the gap to industrial use."

The Colruyt Group doesn't see the accumulated knowledge as a competitive edge. They think it's vital that hyperspectral imaging finds its way into the chain. "We deliberately released these results. We think it's the most efficient way to further develop these techniques. Breeders, growers, and machine builders are already putting a lot of effort into preventing bruising. However, potatoes are still sorted mostly visually," Rony says.

"So the problem goes undetected, and bruised potatoes end up in the chain. We sell several tons of potatoes every week. We buy these from different parties in the market. There's no link to us in the potato project. If more parties get involved, we think this project could very well succeed. We want to find a sustainable solution for bruised products. For us, solving this issue is the most important thing," concludes Rony.

Bruising
Bruising is a quality issue that refers to the blue-grey discoloration of potato tubers' flesh. It's sometimes called Blackspot. Many factors contribute to bruising. The potatoes' growing conditions and variety are important causes. Generally, the less moisture in a potato, the easier it'll bruise. The mechanical treatment of this product is an important cause, too—the rougher the treatment, the more bruising. Many parties in the chain can affect the degree of bruising. There are the laborers who harvest, dump, and stack the potatoes. Then, there are drop heights during processing. Even the conveyor belt, transportation, the box filler, etc., can play a role. All kinds of links can prevent or aggravate bruising. Only the potato's flesh turns blue, not its skin. So, bruising is difficult to detect. 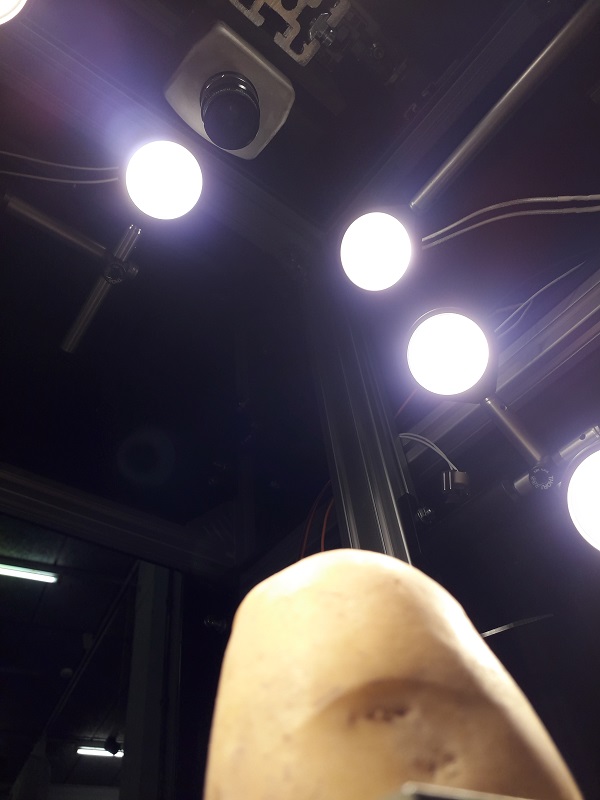 A 'hyper' look at quality
Hyperspectral imaging is a non-invasive camera technique. It allows for detailed light wavelength examination. Which waves are absorbed, and which are reflected when passing through an object? That results in something called a unique spectral fingerprint. A traditional camera captures an image in 'only' red, green, and blue light. That creates a limited, rough image of the object.

A hyperspectral camera captures a more accurate image. It also measures light that the human eye and a regular camera can't process. So, it provides information about internal tissue, such as the tuber flesh of potatoes. You could, otherwise, only see that by cutting open the object.

It's becoming increasingly easy for commercial companies to use this technology. A lot of hardware progress has been made over the past ten years. Cameras have become smaller and cheaper. KU Leuven expects handhelds or smartphones with hyperspectral cameras to come onto the market within a few years.

Data processing speed is another critical parameter. A hyperspectral pixel yields much more information than a regular one. Mathematical models are run on the data to extract the relevant information. That requires an enormous amount of computing power. That was, until recently, a deterrent to using this technique on a larger scale. The latest generation of scanners can, however, handle a reasonably wide range of speeds.

There are already hyperspectral systems on the market for industrial applications. For example, recycling companies use it to sort different, difficult to distinguish types of plastic. Various food industry machine manufacturers use these systems too. That's for the internal quality assessment of fruit and vegetables. This technology can be used to check for bruising. But, there are more possible uses for hyperspectral imaging in the fruit and vegetable sector. That's both in processing lines and for quality control.

The Colruyt Group already uses Xpectrum. This handheld system determines things like meat's protein content. The company wants to implement hyperspectral systems in their quality control too. They want to be able to determine and predict issues. These include products' age and shelf life, juice quality, and Brix values.