From Mexico to US

$5.5 million worth of narcotics hidden in mango, cabbage and watermelon shipments

Customs and Border Protection officers at the Pharr International Bridge and Otay Mesa cargo facilities have foiled three attempts to smuggle more than $5.5 million worth of narcotics into the US. The drugs were hidden in mango, cabbage and watermelon shipments from Mexico.

A press release from U.S. Customs and Border Protection (CBP) from May 29 explained how CBP officers assigned to the Pharr-Reynosa International Bridge loading facility inspected a tractor/trailer arriving from Mexico with a load of fresh mangoes. Using all available tools and resources, discovered packages of suspected narcotics concealed within the shipment. 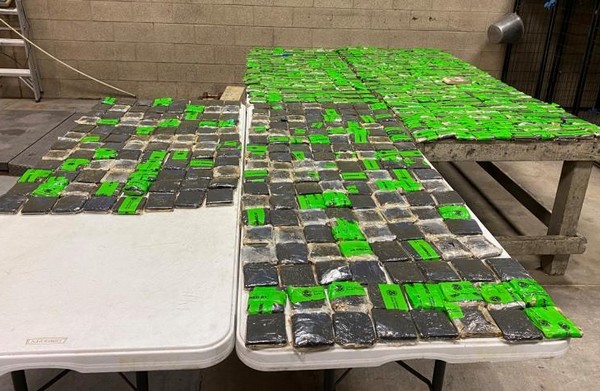 635 packages of suspected methamphetamine were found in a mango shipment / Image: CBP

CBP officers removed 635 packages of suspected methamphetamine weighing 131 pounds (59.5 kg) with a street value of $2,623,500. CBP seized all of the narcotics, the cargo truck, and the case remains under investigation by Homeland Security Investigations (HSI).

That same day, officers inspected a shipment of fresh cabbage and ultimately discovered 30 packages of alleged cocaine hidden within the tractor. These narcotics weighed 73.5 pounds (33.38 kg) and are valued at $567,500.

During another cargo inspection operation at San Diego’s Otay Mesa commercial facility on May 18, Customs and Border Protection agents discovered more than 1,100 pounds of methamphetamine concealed in a shipment of watermelons.