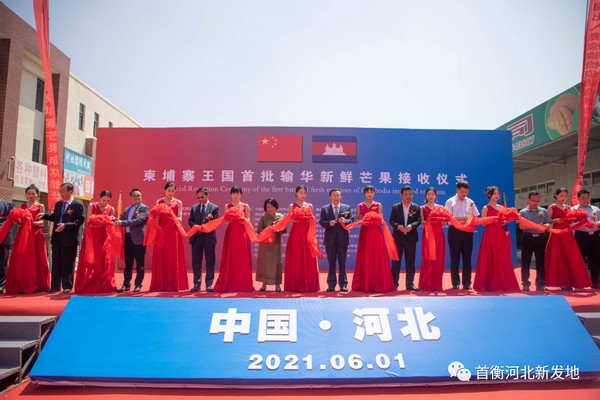 The Cambodian ambassador to China, Khek Cai Mealy Sysoda, was present at the official welcoming ceremony. China and Cambodia signed a free trade agreement in 2020 and since then the trade relations between the two countries have grown stronger, especially in the field of agricultural products. Fresh Cambodian mangoes are the second Cambodian fruit, after bananas, to be exported directly from Cambodia to China. This is a milestone for trade relations between the two countries.

"Cambodian mangoes have always been transshipped via Vietnam and arrived in China at Guangxi border ports. This time the mangoes were shipped directly from Cambodia to Qinzhou port in Guangxi and Qingdao port in Shandong." This is according to Mr. Yang Jianfei, spokesperson for Hebei Xinfadi Wholesale Market. "The first shipment consisted of 6 shipping containers full of Cambodian mangoes. Of these containers, four went to Hebei Xinfadi Market. That may be the reason why the Cambodian ambassador decided to attend the official welcoming ceremony in Xinfadi Market." 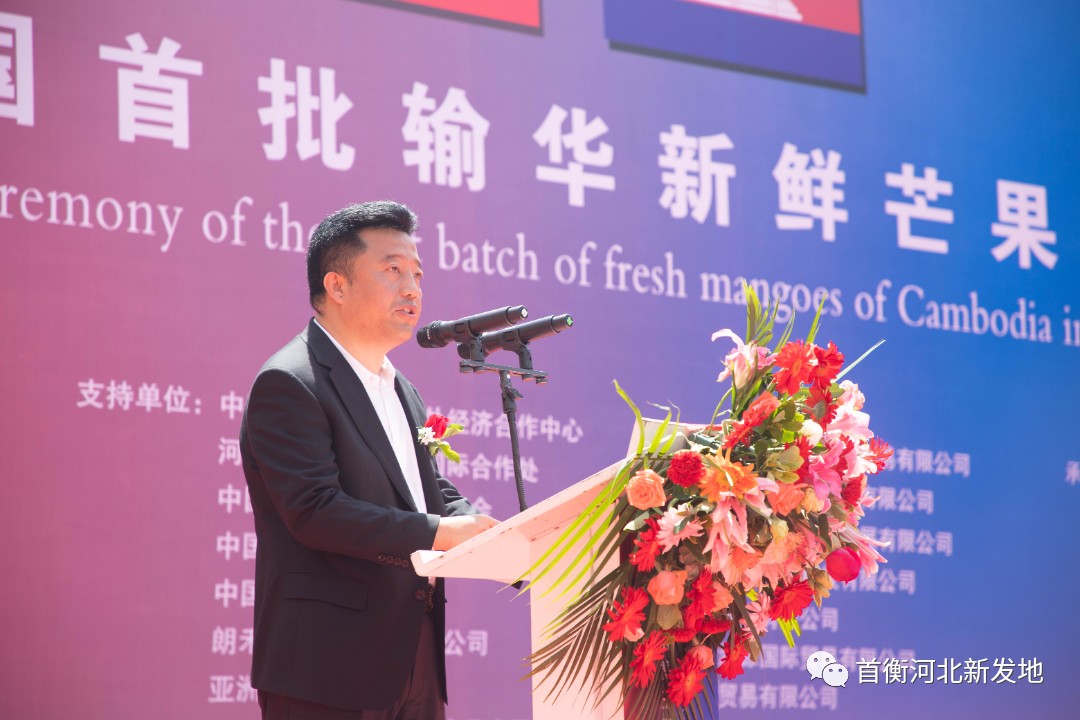 Mr. Yang also explained that this shipment was received by 3 or 4 companies. The 4 shipping containers were sold out within a day. "Everyone at the welcoming ceremony was amazed at the speed of sales. We have 3 or 4 companies in our market who already established close relations with Cambodian orchards. Cambodian mangoes enter the market in August and September and can be sold until May or June in the subsequent year. In August we expect much larger volumes of Cambodian mangoes to enter the Chinese market. Cambodia primarily exports Keo Romeat mangoes to China. This product variety is extremely sweet, and perfectly suits the taste of Chinese consumers. In addition, Cambodia produces large volumes of reasonably priced mangoes. They have quite a strong competitive advantage in the Chinese market for import mangoes." 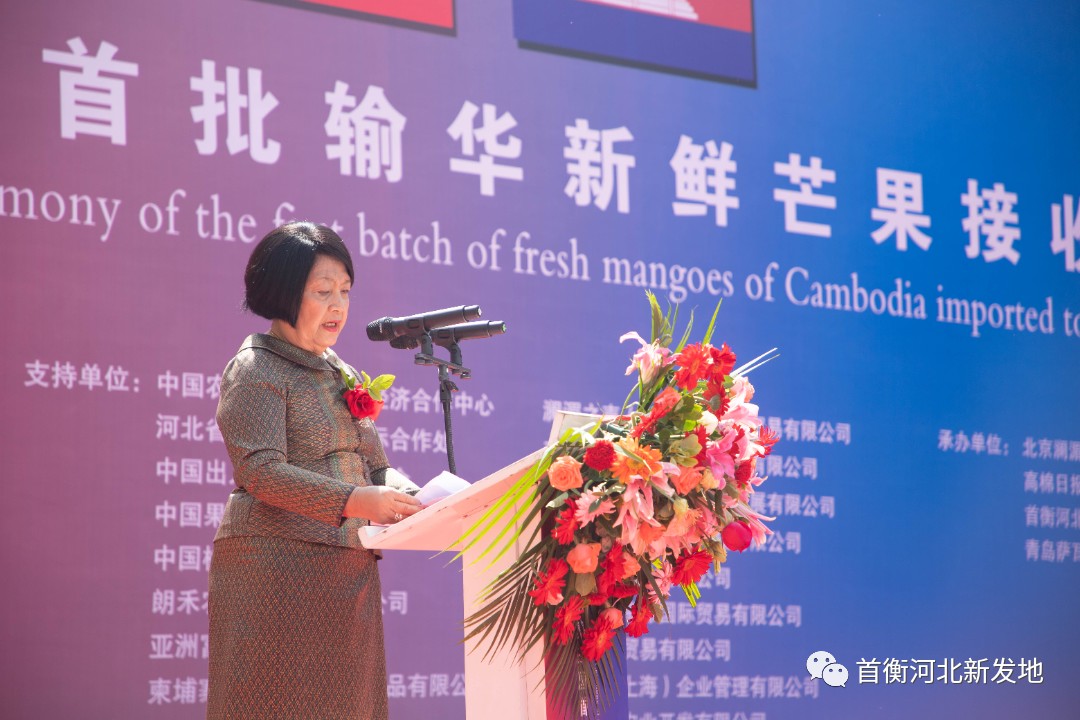 Mi Yalin, chairman of the board at Xinfadi Market, gave a speech during the official welcoming ceremony, in which she stated that the variety and retail volume of fruit from countries along the 'one belt, one road' infrastructure continues to grow. This is particularly true for import durian, bananas, dragon fruit, and longan. They already occupy an important position in the Chinese market. Cambodian bananas account for about 30% of the import banana market in China. The arrival of Cambodian mangoes is the beginning of another stage in the cooperation between China and Cambodia. Growing trade between the two countries stimulates developments that are mutually beneficial. 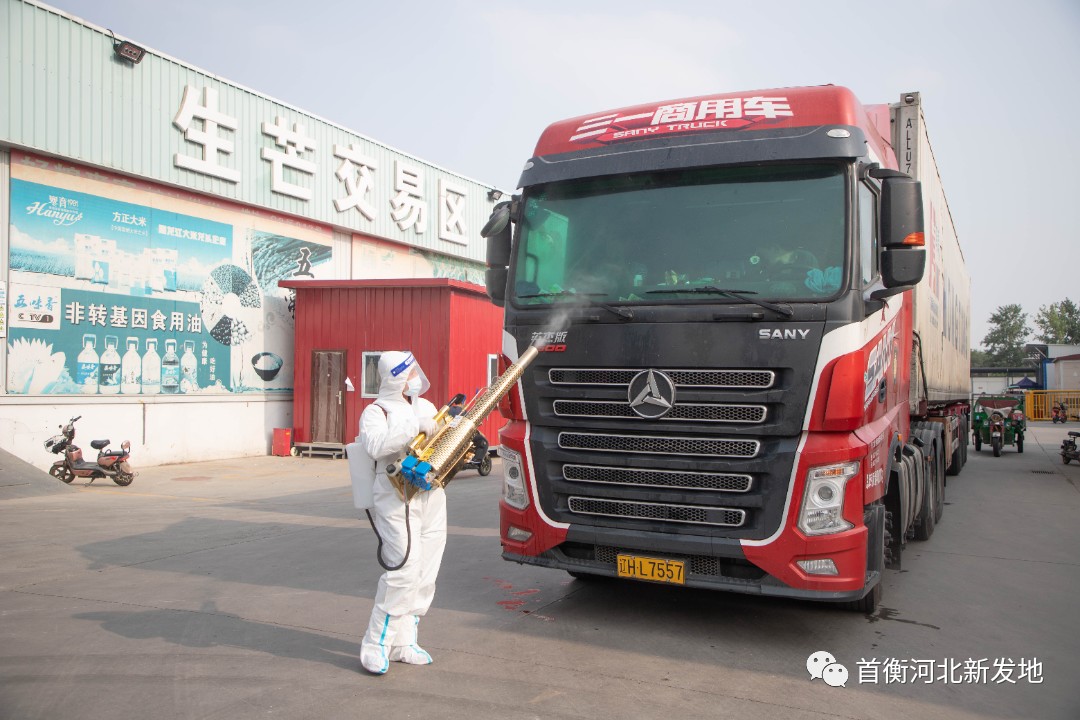 "The import volume of Eastern products in Xinfadi Market increased by nearly 30% during the pandemic. This includes Thai durian. Every day about 80 shipping containers of Thai durian arrive at Xinfadi Market. In addition, the mangosteen and longan harvests in Southeast Asia were abundant this year. The product quality and price are both quite good this year. They received a warm welcome in the Chinese market," said manager Yang.