The melon and watermelon harvest is starting in the Spanish Region of Murcia with a delay of about seven days due to the unstable weather conditions this spring, with alternating rainy days and milder temperatures than usual.

"Although volumes are still limited in Murcia, we expect to be working in full swing from week 25," says Laureano Montesinos, President of the Melon and Watermelon Sector of the Association of Producers-Exporters of Fruit and Vegetables of the Region of Murcia (Proexport), adding that "there should be greater controls on the production, given the excess moisture after the recent rains." 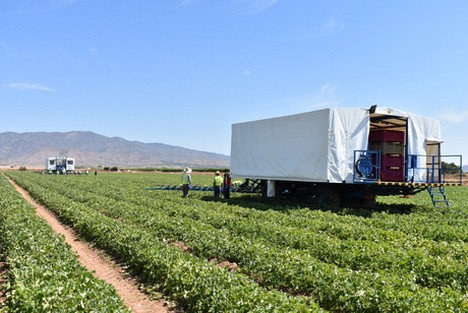 The weather is currently causing a reduction in the yields due to the flowering being affected and the calibers could be smaller in the first harvests, although the sector representative also reports that the quality of the fruit will be as good as usual.

According to data from this association, a reduction of about 8% is expected in the area planted with Yellow, Galia, Cantaloupe and Charentais melons, while the acreage devoted to the cultivation of watermelon will grow by 9 to 10%.

"In this campaign, the most notable increase in the area corresponds to late melons, which were the only ones that yielded positive results for the growers in the previous season," says Laureano Montesinos.

"There is also a drop in the production of melons intended for the food service and hospitality channel, due to the uncertainty generated by the pandemic. This decision had to be taken at the beginning of the year, when production programs are planned, and back then the situation was not as clear as it is now when it comes to restrictions in each country," he said.

The melon and watermelon campaign in Almeria has so far been marked by a low demand; a result of the bad weather at destination, and therefore, also by low prices. "We are seeing that with the harvest starting a little later in Murcia and Almeria finishing already, there may be a market gap that would allow us to start the campaign off on a good foot, since the demand would be greater than the supply and thus prices could improve," says Laureano Montesinos.

The total volume of melons and watermelons in the 2020/2021 campaign exceeded 220,000 tons; down 7% in the case of melons and up 6% in that of watermelons compared to the 2019/2020 campaign. "This year's production will depend on the yields. We know that there are fewer hectares planted of some varieties, but this does not mean that fewer kilos can be exported. Everything will depend on how consumer trends develop and on the weather at origin and destination," he says.

The main export destinations for Murcia's melons and watermelons are in the European Union, with shipments going also to the United Kingdom, the Baltic countries, Eastern countries and other third countries recently opened, such as Canada and the United Arab Emirates, among others.