"It is quite a challenge to supply a whole range of specialty onions all year."

It's been nine years since Bas Melissant and his family emigrated from the Netherlands to Canada. He bought a farm near Norwich and founded MEN's Farming Inc. It supplies specialty onions to the North American market. In this interview, he reflects on the move and building the company. "Emigrating to Canada wasn't easy. Neither was building a cultivation and processing company from the ground up," Bas recalls.

"Or finding buyers for your product. I'd gained experience in several fields. I was a contractor, buyer, pool manager, international salesman, manager, and grower. That was in the Netherlands and France. It was very useful in starting this business. I grew my first onions when I was 17. And have been lucky to work for and with the best business people in the onion world. That was a great, instructive time." 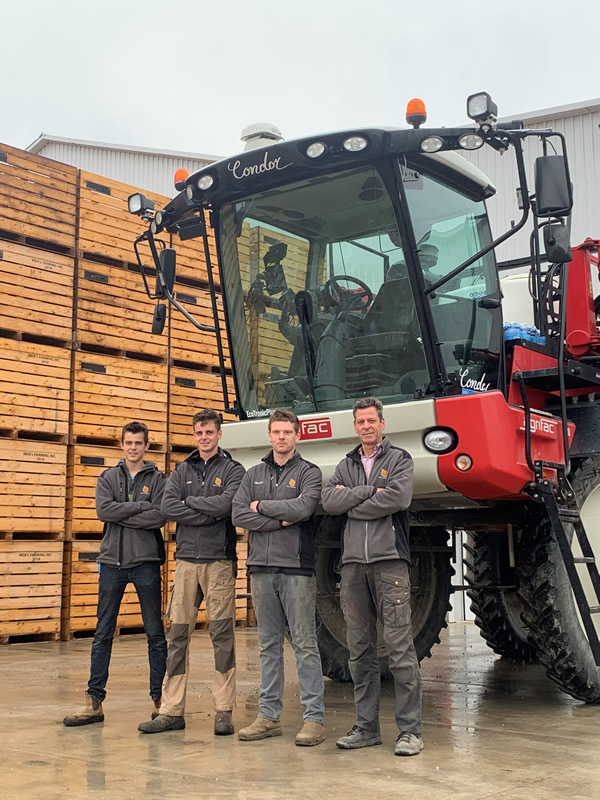 From right to left: Bas, Herman, Joris, and Barend.

When asked who that was and what he learned from them, Bas replies, "From Dingeman Heijboer, I learned to buy at the right time. And to never let yourself be seduced by the market's high expectations. He sold products at high prices but never bought at those prices. Jaap Wiskerke was very organized. His market and figures knowledge allowed him to take up large positions. His enthusiasm and power of persuasion motivated everyone. Henk (H.B.) Jansen was an example of unprecedented strength and perseverance."

"And then, of course, TOP Onions. I had a fantastic time there. I was able to develop my skills in all kinds of areas. Adrie Murre taught me to keep building on things in which you believe. You must set out broad strategic lines well. And give your people the confidence they need to perform at their best. His way of thinking and acting make the difference between a good and great company."

"We developed software to supervise and monitor the cultivation properly. That was along with my friend, Arie Struik, and his T.T.W. team. There were two ideas behind it - 'to measure is to know'. And 'to translate the figures is to determine the course'. Through risk management and good insight, cultivation results gradually improved," says Bas. 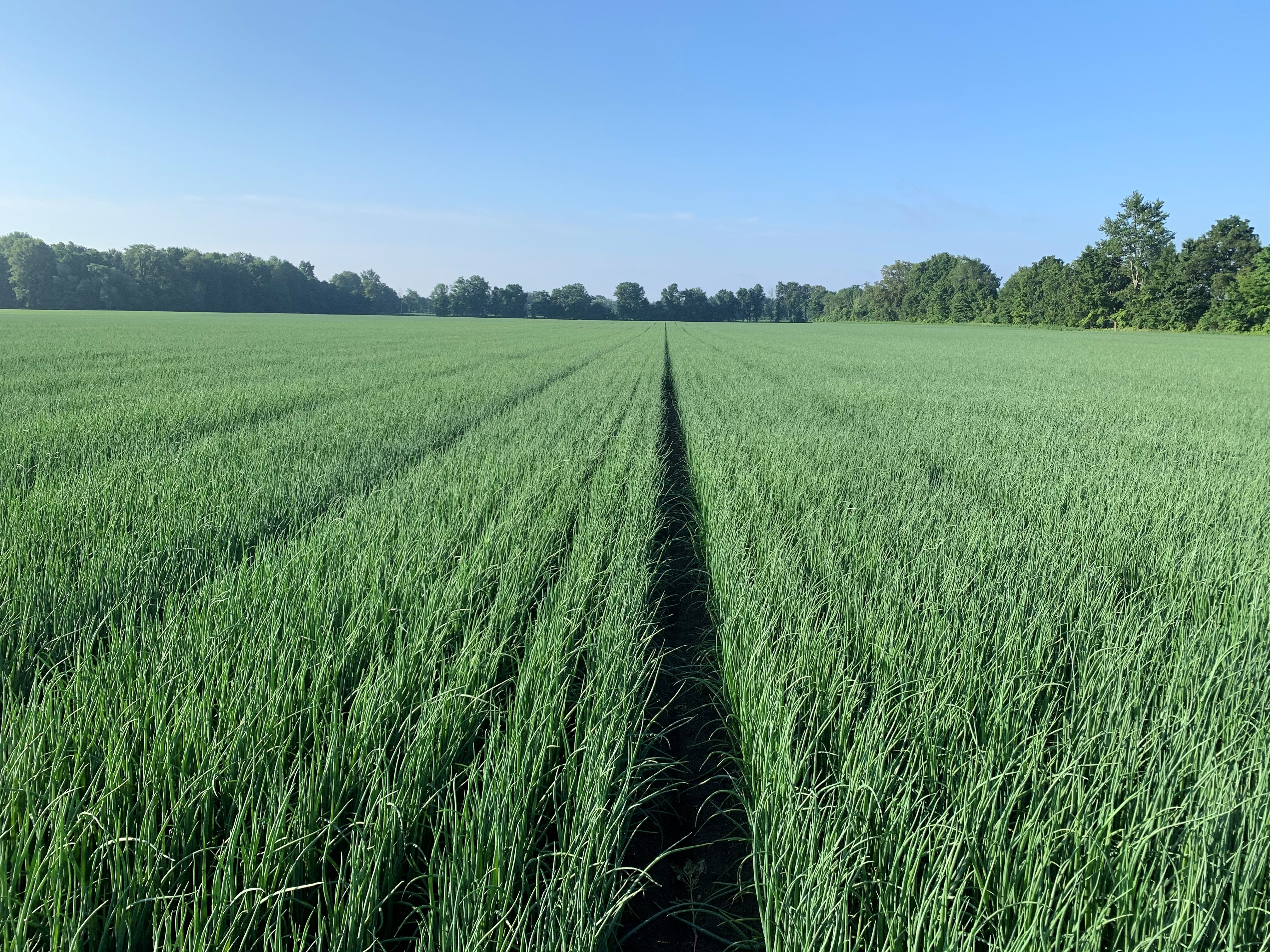 "I've always liked starting new things and accepting challenges. I can put all my experience, knowledge, and disciplines into practice here. The plan was to grow, process, and market several onion varieties. It turned out to work well. But during its implementation, you're very dependent on good people. And I've always been fortunate in that respect. In the Netherlands, I had Jan van Strien. He's now further developed PPA together with Jelle van der Krift. In Canada, I met Herman Visscher, who's also of Dutch origin. He's now my cultivation manager."

"Without Herman and my own boys, MEN's Farming Inc. certainly wouldn't be what it is today. We grow a whole range of specialty onions. A group of regular Canadian and American customers buy these. Our market and customer bases aren't that big. So, it's vital that we can rely on our clients and they on us. And we've built up those relationships of trust over the years. That means being there for each other 52 weeks a year. Through good times and bad. It's a partnership of mutual dependence. It's great to achieve something like that together," Bas continues. 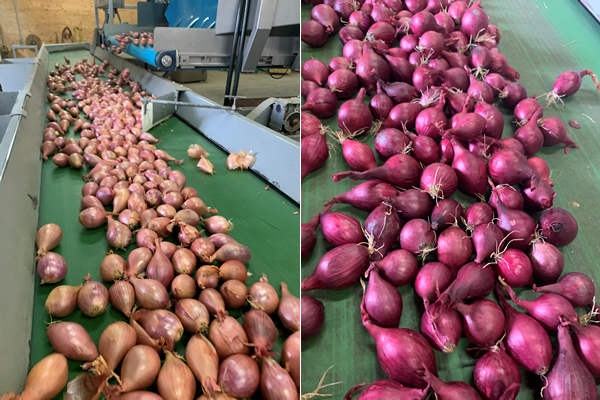 "To achieve our plans, we've invested a lot in land, buildings, and machines. The banks won't go that far when you're just starting out. Fortunately, Dutch investors will. They contributed to various areas. Without that, we'd never have had such a great company. I'm really very grateful to those people. We're can now gradually buy out the investors and work with bank money. By working hard and paying attention, we've been able to build a healthy business."

"In August 2020, we installed a Tomra optical sorter. Now we can complete orders faster with fewer people. And it's easy to set the desired quality criteria. Herman, Joris, and Job were immediately sold. That's when they saw the machine working at Tomra in Sacramento. Every year we also take a step forward in the development of precision agriculture," Melissant explains.

"Dutch companies help us with that. And they, in turn, use our experience with drip irrigation, etc. It's great to see how the Dutch onion sector is facing cultivation and marketing challenges together. That's under the leadership of Gijsbrecht Gunter. The first onion conference was 20-25 years ago. There, I already asked that someone who oversees the whole spectrum be appointed." 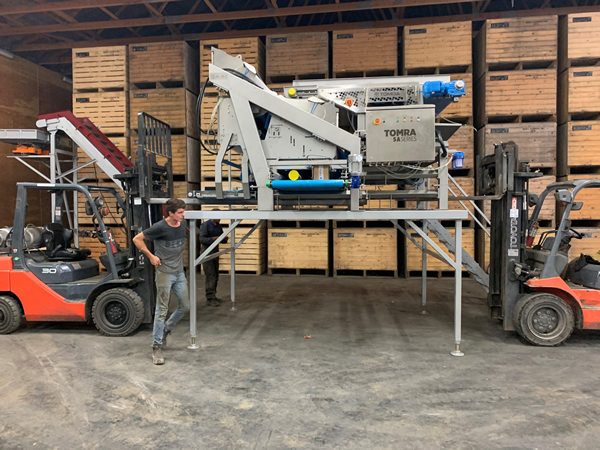 Joris built a platform for the Tomra sorting machine.

When asked how the global pandemic affected his business, Bas answers, "We got our first cancellation on 13 March 2020 - my birthday. The restaurants had to close. And the entire food service was running at half strength or even less. This went on for a bit throughout the season. Eventually, we disposed of a lot of specialty onions. We sold them to cattle farmers in the area."

"That was at the end of the season. We could get back into the fields at the end of April. Then we didn't know that it would be so long before COVID-19 would be over. We knew we were taking a risk by just sowing like nothing was wrong. But we also didn't want to risk leaving our customers without product. That's if things returned to normal."

"That worked out well for red and pink onions and shallots. The market for these has been good the whole season. Shallot yields were disappointing everywhere. So, they're scarce and therefore expensive. I have contacts in the Netherlands and France. Thanks to them, we could buy some more product. That was so we could supply our buyers as well as possible," Bas says.

"But there was a reefer container shortage in March/April. That meant we had to forfeit agreed deals. There were too few 'cipollini' and 'pearl onion' sales. These go mainly to the foodservice sector. Retail absorbed some of this. But not enough to be able to sell them all before the new harvest in August. So, the end result will be less than in a normal year. That's for the second year in a row." 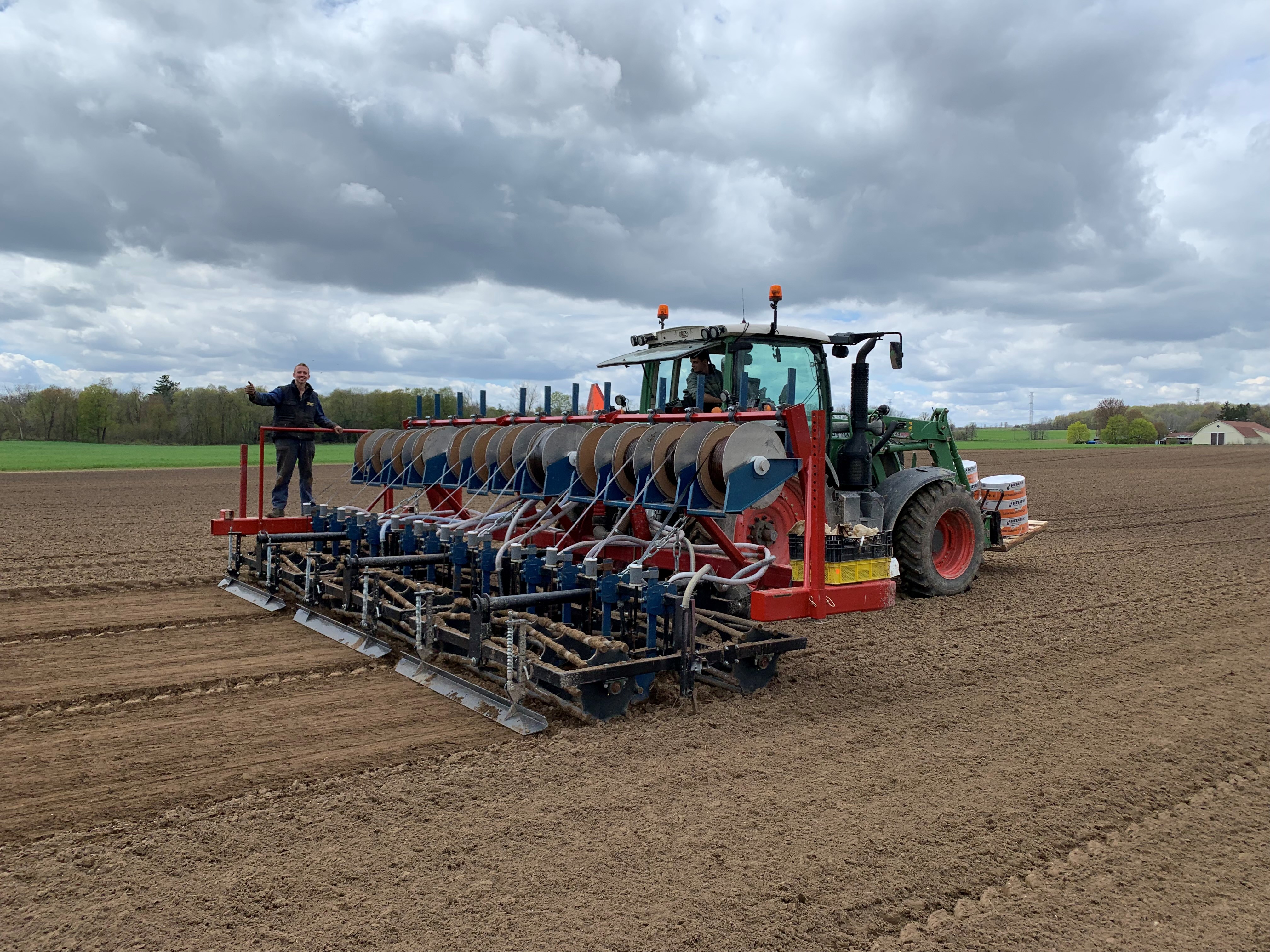 And Bas realizes that things won't get any easier. "Products are becoming scarcer. When the red onion season started, we had no bags. Our supplier had production backlogs because of COVID-19 infections. And when we had bags again, we couldn't deliver immediately. Our customer didn't want to leave his new supplier in the lurch. However, once we could start delivering, the red and pink onions had become much more expensive. So not everything that changed because of the pandemic has been negative."

"There's a Toyota factory in the area. They usually give our pallet supplier ten loads of pallets a week. But that factory's been shut down for months. They can't get a chip from China for the computer in their cars. That means we can currently no longer buy used pallets at $5 each. We have to pay $45 each for new ones," explains Melissant.

"Products like soya beans and maize are widely grown here. These have become 40-50% more expensive. So we have to pay more property tariffs. All the costs of raw materials are rising. Requirements are being tightened everywhere. There's a concentration of buying and selling power everywhere. I expect it'll be tough for us too. There's a lack of containers, and their prices are rising. That benefits local growers a bit." 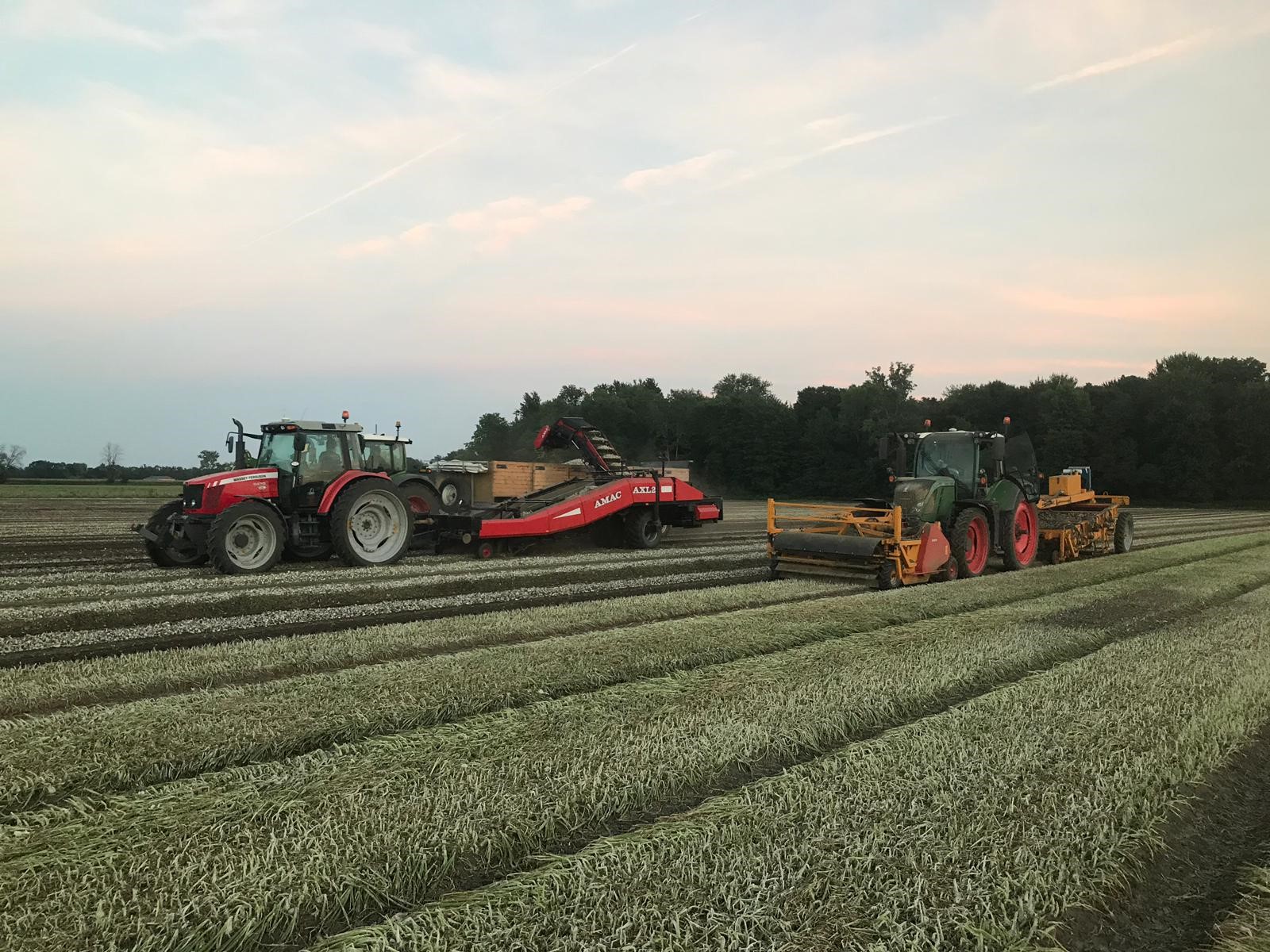 "We'll see how things go. These are uncertain, anxious times. I've never had as much stress as this past year. 'Unable to' has never been in my vocabulary until recently," Bas admits. "This crisis has shown us how dependent we are. The big question is then, on whom?" My brother sent me a video this week about the great reset and 2030 agenda."

"But," he added, 'What a privilege that we have the Bible. And that we know the Lord, not the super-rich and governmental leaders, rules'.  I couldn't agree more. My Amish neighbor uses a horse to mow his lawn. He knows nothing of most of our concerns and problems. I've often thought he's much better off than we are," Bas concludes.