The Citrustech Operational Group has presented the results of its innovations in mechanized citrus harvesting prototypes, reporting that it is possible to reduce production costs by up to 35% compared to manual harvesting, although to achieve this, it is recommended to adapt "current plantations to have the trees in a continuous hedge and without lower branches." The results were presented at an online workshop organized recently by the Tierra de Cajamar platform.

Sergio Cubero, from the IVIA Agroengineering Center, explained how they have developed a harvesting platform adapted for citrus that houses two palots, so that the fruit can be harvested with the least possible damage, regulating the harvesting height and preventing idle times in the harvest. "We have used technology based on computer vision with the objective of replicating the inspection of citrus fruits in warehouses, but in the field," said the researcher. "Between 8 and 12 fruits are picked per second, saving time, reducing the need for transport and avoiding rot damage, as such fruits are already discarded in the field." 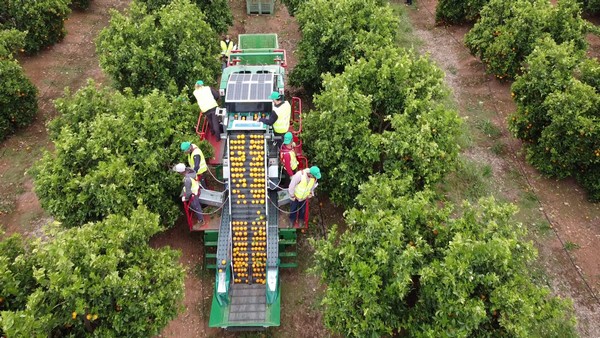 The trials also showed the efficacy of cushioned shock absorbing tarps to prevent damage to the fruit falling at a similar rate as with hand picking. 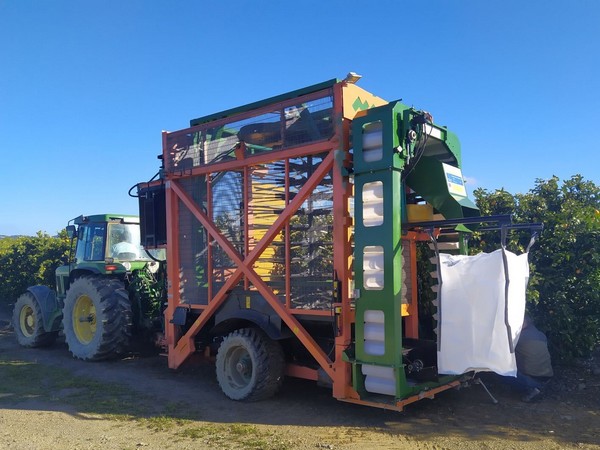 Harvester for citrus harvesting
Sergio Castro, from the University of Cordoba, was in charge of presenting the results in harvesting with a canopy shaker adapted for the harvesting of citrus for processing. "We found only 5% serious damage to the fruit, and also moderate damage to the trees, which could be reduced by adjusting the machine's parameters and the layout of the trees," said Sergio Castro, although the fruit from the branches inside the trees cannot be harvested.